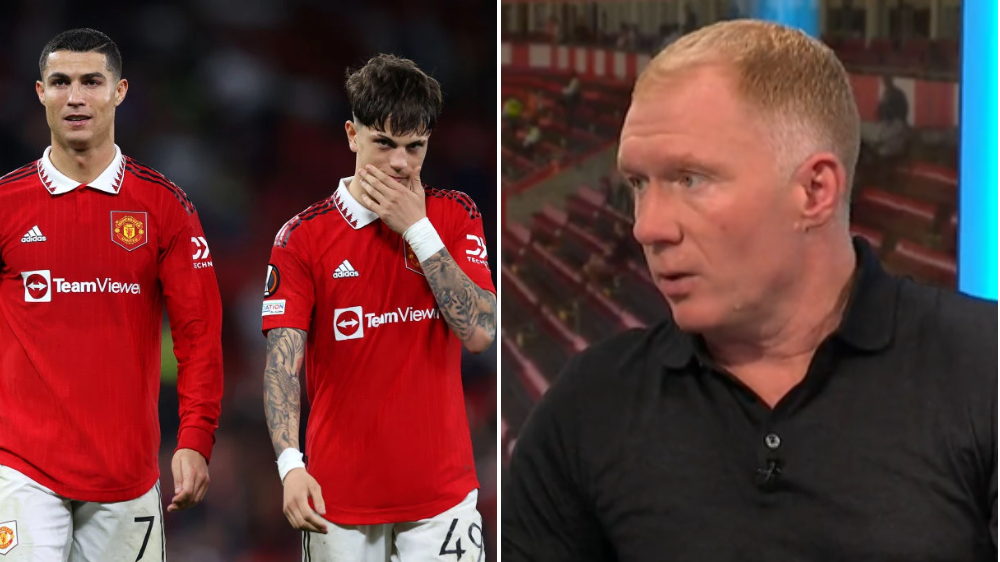 Paul Scholes compared Alejandro Garnacho to a ‘young Cristiano Ronaldo’ after the 18-year-old starred on his full Manchester United debut in the Europa League win over Sheriff Tiraspol.

United clinched a routine 3-0 win at Old Trafford on Thursday night thanks to goals from Diogo Dalot, Marcus Rashford and Cristiano Ronaldo.

Argentina U20 star Garnacho was handed his first senior start in the Europa League clash and grasped the opportunity with both hands to earn rave reviews from Scholes and fellow former United star Owen Hargreaves.

Scholes told BT Sport: ‘This crowd loves entertainment and this lad was really entertaining, almost like a young Cristiano.

‘I was impressed because some wingers can only go one way but he could do both which makes him so unpredictable.

‘I thought his performance was really exciting for an 18-year-old kid, he really is one for the future.’

Hargreaves added: ‘He was exceptional, he had real quality. What I really liked was he was so direct. He has some tricks as well.

‘He had everything tonight, he was just missing a goal or an assist. When you think he’s 18, he was the most effective of all the forwards tonight.

‘I really enjoyed watching him. He’s definitely one for the future and one for now actually.’

Such was Garnacho’s display, the Argentine starlet received a standing ovation when he was taken off in the 79th minute.

Despite a comfortable evening at the Theatre of Dreams, Manchester United remain second in Europa League Group E after group leaders Real Sociedad beat Omonia away from home.

Erik ten Hag’s side now face a Europa League group decider with La Liga side Real Sociedad in Spain next week. Anything but a win will see United go into a play-off which could see them face Barcelona, Juventus or Atletico Madrid.

Rating Manchester United’s win over Sheriff, Ten Hag said: ‘It was OK. Of course you hope you score in the first half hour so it took a bit long but we deserved that goal.

‘The second half we scored two more good goals from open play and I’m pleased with the clean sheet because we gave nothing away. It was a focused win.

‘Our occupation of space in the box could still be done better, the second and third goals we did that well. We occupied positions and scored.’