Tottenham boss Jose Mourinho cannot blame the loss to Chelsea on his team’s injury problems, says former Spurs striker Peter Crouch. Chelsea beat Tottenham 2-1 on Saturday to complete the double over their London rivals. Goals from Olivier Giroud and Marcos Alonso either side of half time sealed the win despite a late Antonio Rudiger own goal.

Spurs were without strikers Harry Kane and Heung-min Son, as well as midfielder Moussa Sissoko.

Mourinho has bemoaned his lack of options up front in the lead up to the match.

But Crouch believes the Portuguese should have set his side up in a more attacking manner at Stamford Bridge.

“Listen, losing Son and Kane is a huge, huge blow but it is a squad game and you need to be able to cope with that,” Crouch said on BT Sport. 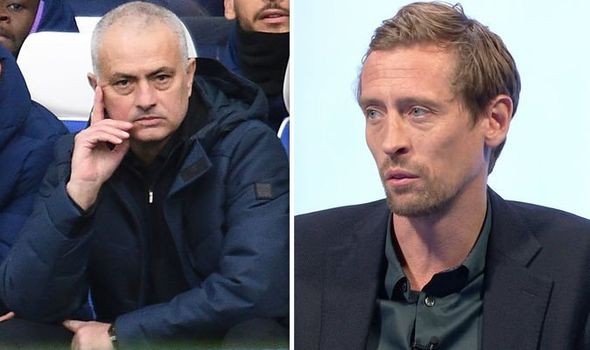 “I just didn’t think they had enough ideas going forward and that showed. Chelsea fully deserved the win.”

And Crouch was also full of praise for his former England team-mate.

“[Lampard] set the team up perfectly today, right from the first whistle I think Mason Mount set the tone with a tackle,” Crouch continued.

“I thought he was excellent today, with Giroud the ball sticks and when the ball’s sticking like that players can get round him.

“I thought Alonso was first class as well today. So impressive all-round from Chelsea.”

“[Giroud’s] one of the top goalscorers in French football internationally,” Ferdinand said on BT Sport.

“And I think Frank’s changes today have been really at the forefront of the good things that they’ve done today. Mason Mount, Barkley, Alonso and also obviously Giroud with the goal.

“I think a big part of [the pressing] has been Mason Mount, he’s the trigger, he sets the tone, [Ross] Barkley behind that as well.

“They’ve all been in tune together and you only get this, there’s an intent from the management definitely, but then from the training ground they all know their triggers.

“It’s about timing and getting there at the right time. They’re not going in ones and with single people, they’re going as groups and they’re winning their individual but also their team battles.”