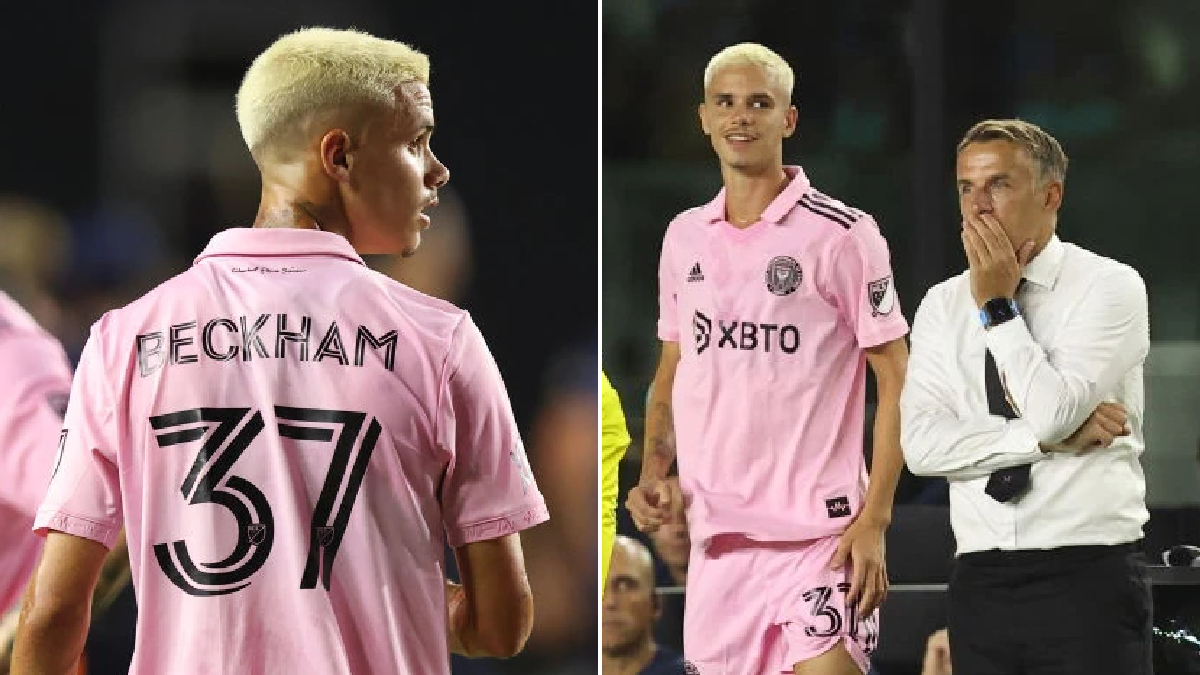 Inter Miami boss Phil Neville has defended playing his son, Harvey, as well as Romeo Beckham in Tuesday night’s heavy 6-0 defeat to Barcelona and insists they had ‘earned the right’ to feature.

The Major League Soccer side were put to the sword by the Catalan giants, with new signing Raphinha scoring and assisting twice in a rampant display from the visitors.

Despite neither Harvey nor Romeo – son of David Beckham, of course – having played a single minute of MLS football in their careers so far, they both came on for the showpiece pre-season friendly.

Harvey, 20, was introduced at half-time while 19-year-old Romeo played the final five minutes, but Neville senior rejected suggestions they were only involved because of their famous fathers.

Asked about the pair, the former Manchester United man said: ‘Well I think we put the two boys on at wing-back and the first thing you measure is temperament. Have they got the temperament to play in this game? I think both of them did.

‘I was super proud of them both. Romeo only got on for the last five or six minutes, which is difficult, but they’d earned the right to get on.

‘They both showed really good temperament and I think tonight we learned an awful lot.’

He continued: ‘It was a big challenge for us, as you could see. We were playing against world-class players, two world-class teams in each half really.

‘So it was a brilliant occasion to play in, you could feel the buzz in the air, the supporters – we’ve now experienced what a sold out Drive Pink (DRV PNK Stadium) feels like.

‘I think from a playing point of view, the game was always going to be something for us to really enjoy.

‘And we’ve got a lot of young players in there that will have taken some real valuable experiences about the level that you need to be at to play at the top, top level.

‘DeAndre [Yedlin] has played at the top, top level, we’ve got players that want to go to World Cups, play in the Champions League etcetera and they’ve experienced tonight what the best do.

‘I thought it was a brilliant learning experience for us all. It was difficult, we had to dig in, we had to fight, we had to accept that they were going to have a lot of possession of the ball and really to keep it to 6-0 was a real positive for us.

‘It’s a great learning experience for everyone in the team and everyone got onto the pitch that we wanted to, got valuable experience, and they will have learnt an awful lot.’