Smith Rowe, 20, has become a key figure for Arsenal having broken into Mikel Arteta’s first-choice starting line-up in December.

Overall, he has made 23 senior appearances this season, scoring two goals and setting up six more.

Here, we take a look at his rise from young hopeful to regular starter with exclusive insight from some of the coaches and players who have helped him along the way.

‘Dedicated… but didn’t stand out’

Smith Rowe has been an Arsenal player since the age of nine but, according to Andries Jonker, the club’s academy manager between 2014 and 2017, he didn’t stand out in terms of his talent.

The Dutchman describes him as “a quiet boy, very dedicated, always present, always there, but nothing special.”

He adds: “A long time ago, the famous Dutch coach, Rinus Michels, said, ‘Listen, two out of a hundred [young players], don’t worry, they will make it, don’t disturb them.

“I knew Emile was with the 15. You could predict he was going to have a career. Motivation, dedication, talent. But nobody would have told me, and I would have told nobody, ‘This guy’s going to play at the Emirates’. Nobody was sure about that.

“Dedication, absolutely a 10, working hard, 10. Never a bad game, always acceptable, but he hardly stood out.

“A player like Reiss Nelson, he was sometimes a five but also sometimes a nine, where he was unbelievable.

“Emile didn’t show those bad games but neither those outstanding games. He was always invited for the English national teams though and we understood, because he was a completely reliable kid.” 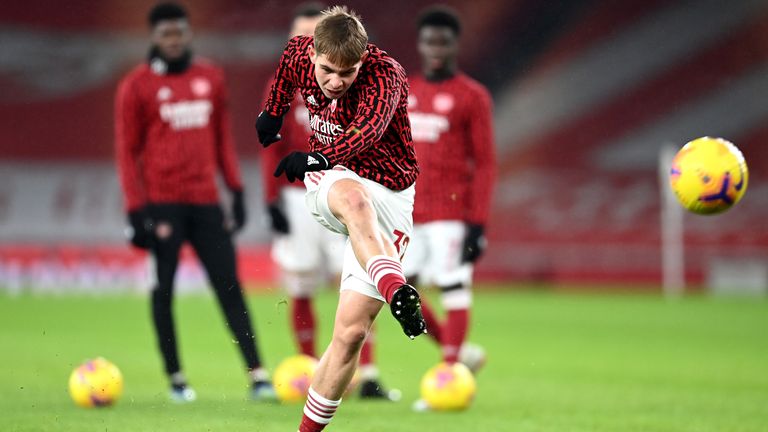 After an injury prevented him from making an impact during a loan spell at RB Leipzig in 2019, Arsenal decided he needed another temporary move away from the club to gain first-team experience.

This time, he stayed in England, moving to Championship side Huddersfield in January 2020.

Mikel Arteta: “We made a decision to send him on loan.

“I sat down with him and I told him, ‘I have a question mark with you and it’s your character. Who do you want to be? And who are you going to be when you go on loan? The expectations are going to be high and people are going to start to look at you to win football games. If you are ready to step in to do that on day one, show that personality and that courage, then you will be a key player in our team in the next few years’.”

‘He could find space in a telephone box’ 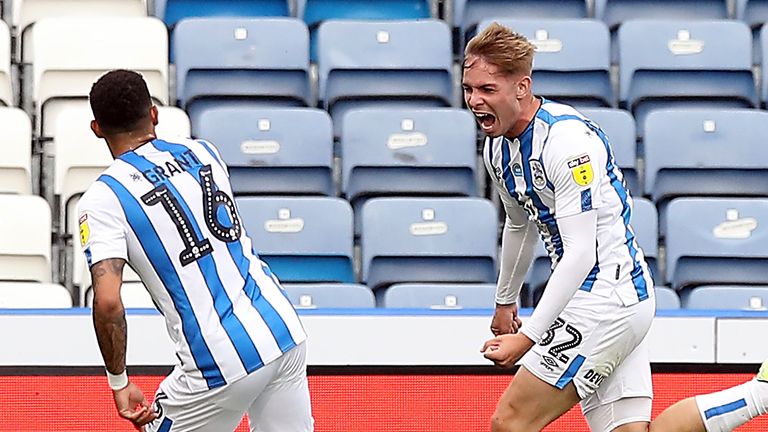 Smith Rowe delivered at the John Smith’s Stadium, his eye-catching performances in the No 10 role helping Huddersfield avoid relegation from the second tier.

Danny Cowley, Huddersfield’s manager at the time, says: “He’s one of those where the first moment you see him, if you love football, you fall in love with him, because he’s such a fantastic player, just a total footballer. From the moment we arrived at Huddersfield, it was high on our list to try to make the move happen.

“The amount of runs he makes is incredible, his movement off the ball. He’s always one-v-one with the defender and he’s brilliant at finding space. He could literally find space in a telephone box.

“He’s just got this art of being able to receive the ball behind the midfield, speed up your play, and when he’s in free-flow and travelling with the ball, it looks so rhythmical.

“He’s got such wonderful balance. We have to be careful because we do this to our young players, don’t we? But it’s really hard not to get over-excited when you’ve worked with Emile because you know the ability that he has.”

For all his talent, however, Smith Rowe’s playing time had to be carefully managed in the Championship.

Cowley adds: “Emile wanted to play every minute but physically he wasn’t quite ready or robust enough to be able to go into Championship football and play Saturday, Tuesday, Saturday.

“The demands are so much bigger than the demands when playing U23s football. We had to layer it and be quite gradual and build towards it.

“By the end of the loan spell, he’d become much more confident in his own body. I think he’d done that because of that gradual increase and the way we periodised his training.”

‘You could see he was going to give us something different’ 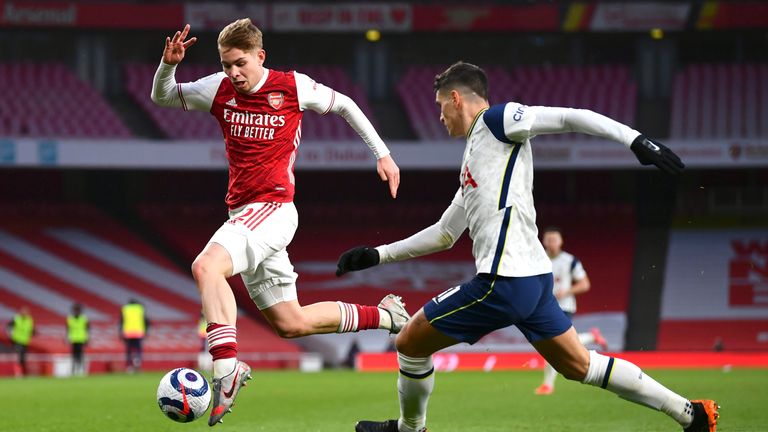 When he returned to Arsenal and reported to training ahead of the new campaign, his progress was clear to his manager.

Arteta: “You saw his reaction, the way he played when he was on loan, and when he came in in pre-season, he was ready.

“He was really unlucky because he was out for three, three-and-a-half months with a shoulder injury.

“But the moment that he was back in training, we had to find the right moment to throw him in because you could see he was going to give us something different.”

Smith Rowe made his first Premier League start of the season against Chelsea on Boxing Day, helping the Gunners claim a much-needed 3-1 win, and he has featured regularly ever since.

Arteta adds: “He’s got all the ability in the world to do that in a consistent way and then as well it’s his intelligence, it’s how much he can read, understand and affect the game to make better decisions with the quality he has.” 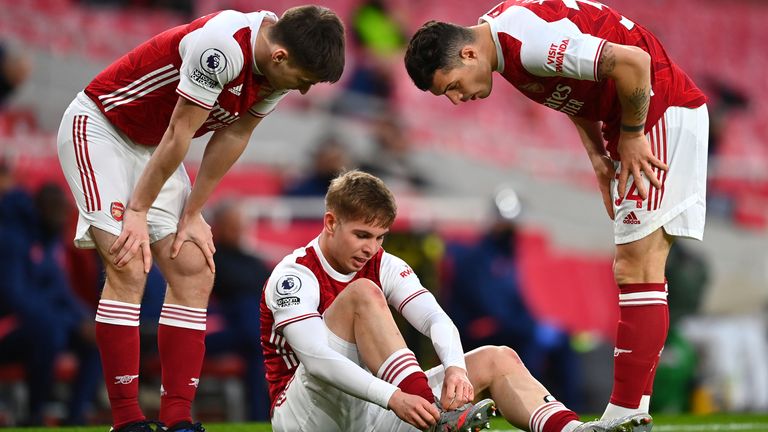 He has impressed his team-mates as well as his coaches.

Arsenal left-back Kieran Tierney: “What a player, honestly. I think you can see how much I enjoy playing with him.

“It’s a good understanding we have and off the pitch as well, he’s a great guy, a humble guy, and he’ll go very far in the game.”

His humility and good character was apparent to Cowley as well.

“For someone who has so much confidence on the pitch, he’s quite introverted off the pitch, quite shy, quite unassuming,” Cowley adds.

“He’s a lovely boy and comes from a really nice family. His parents are both teachers and work with underprivileged children, so he’s got a really good support network around him.”

‘I thought he’d be a right-back’

Smith Rowe was primarily used on the right wing in Arsenal’s youth teams and some felt he might even end up playing as a full-back.

Jonker: “We always played with the youth teams in a 1-4-3-3 and he was always right winger. Every now and then he might be in the No 10 position, but basically he was a right winger.

“In those days, I thought maybe his best position would be right full-back. But now he is playing in the offensive part of the team. He’s able to play on the left, that makes sense, but also he plays at that level as the 10 and that means tactically he has made progress as well.

“I think the fact that Mikel Arteta puts him on the pitch almost every week means he has a huge confidence in him.”

Smith Rowe is not the only academy graduate establishing himself under Arteta. Bukayo Saka has become similarly important while there are others behind them hoping to break into the team as well.

“I think they are the start of the Arsenal heart in the Arsenal team,” adds Jonker. “Those guys, they sleep Arsenal, eat Arsenal, drink Arsenal and just have one wish – playing for Arsenal at the highest level.

“They want to have significance for the team and that’s what they are doing. I think they are fulfilling their own dream, but they are also quite important to Arsenal in the way they play.”