FIFA secretary-general Fatma Samoura has told Australian governments to loosen their purse strings in preparation for a tidal wave of interest in women’s football that will follow next year’s Women’s World Cup.

Samoura, the second-in-command at FIFA to president Gianni Infantino, was in Sydney on Wednesday to help celebrate the one-year-to-go milestone until the start of what will be the biggest sporting event held in this country since the Sydney 2000 Olympics. 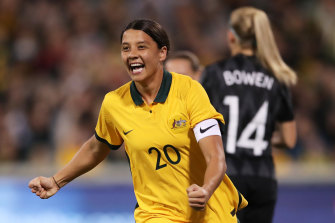 The tournament, which is being co-hosted with New Zealand, is expanding to 32 teams for the first time and on the back of increased professionalism, on-field standards and fan support of women’s football across Europe, it is expected to shatter the 1.12 billion viewership record that was set at France 2019.

Football Australia announced on Wednesday it had already clinched $230 million in funding from federal and state governments for their “Legacy ’23” campaign, which is aimed at leveraging the World Cup to boost participation rates, improve community facilities and stadiums, and set up leadership and development programs for women in the sport.

But FA will be asking for more during the next 12 months, and Samoura said history had proved that World Cups lead to a threefold surge in participation in the host country which needs to be supported to ensure the best young players reach their potential. After Australia hosted the 2015 men’s Asian Cup, participation here grew by 20 per cent. 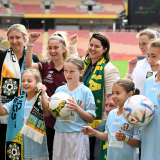 “We’ve seen after each World Cup, that the number of people who register in the host country … is immediately multiplied by three,” Samoura told reporters.

“And today is an opportunity also for me to make a claim to the government of Australia in particular, because you will see a huge increase in the number of young girls who would like to register to play football. And it’s time that we start from now on making sure that they have the facilities available to allow them also to become one day football stars.”

FA chief executive James Johnson said he was happy with the level of government support provided so far, which leaves them $55 million short of their original target, but said more was needed – including from corporate Australia and from FIFA, which is also expected to contribute to the legacy push.

“Ultimately, what we want to do is ensure that the Women’s World Cup is more than just a good month of football. It needs to be a game-changer and drive transformational change,” Johnson told the Herald.

The Women’s World Cup will be staged towards the start of what has been described as Australia’s “green and gold decade” of major sporting events, but there could be more big football tournaments to come.

FA has this week submitted expressions of interest to host the next men’s and women’s Asian Cups. The latter will be held in 2026 but the men’s edition in 2023 is also up for grabs after China, the original hosts, pulled out. Australia will only put forward a formal bid if the AFC agrees to move it to early 2024 – which would avoid a clash with the Women’s World Cup in the middle of next year – and if there is requisite support from governments.

“I’d anticipate there would be some interest with many of the focuses of this new [federal] government, and it’s something we’re looking forward to talking to them about,” Johnson said.

A potential bid to co-host the 2034 men’s World Cup is also a “continuous discussion” at FA, he said.

“We have said that one day Australia does need to host a men’s World Cup, and if you look at the pathway to get there, what is required is to host more and more major international competitions,” he said.

“The more of them we can host, the more [foreign] club teams are coming out Australia, the more normal it is for our community to see international and global content on our shores, the more we’ll realise that vision of hosting the men’s World Cup one day. I think you can see the steps being taken.”

Meanwhile, Matildas star Ellie Carpenter is on track to return from her ACL injury in time for the Women’s World Cup and will spend the next six weeks in Sydney rehabbing the injury she suffered in last season’s UEFA Champions League final while playing for Olympique Lyonnais.

“One of my main goals is to be back well before [the World Cup],” Carpenter said.

“Being 365 days out, it seems very close. It’s very exciting and a bit emotional … it’s so amazing to have it in our country. Women’s football is growing by the day, we can see that in the European Championships at the moment with the sold-out crowds and the new records every week. And I definitely think Australia and the whole world would definitely jump on that. I know this next year will come around very fast.”

Tickets for the Women’s World Cup go on sale on October 6 while the draw, where the Matildas will find out their group-stage opponents, will be held on October 22 in Auckland.