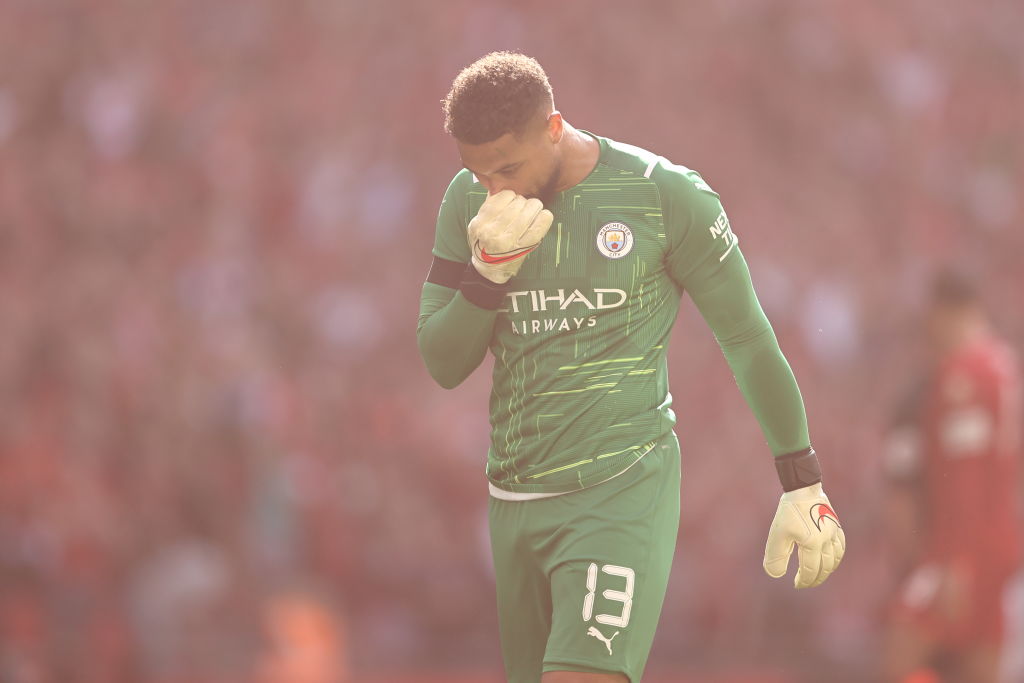 Liverpool have booked their place in the FA Cup final on 14 May after they picked up a memorable 3-2 win over Manchester City at Wembley on Saturday.

The Reds appeared to have done all the hard work early as they went in at half-time with a 3-0 lead thanks to an Ibrahima Konate header and a Sadio Mane brace.

The first of those Mane goals came from a disaster for stand-in goalkeeper Zack Steffen as he dallied on the ball and the Senegalese forward lunged to tap in from close range.

Jack Grealish scored straight after the break, but that did not appear to be enough as Liverpool controlled the game, until Bernardo Silva struck in injury time to make things very tense at the end.

Jurgen Klopp’s men just about hung on despite chances for Fernandinho and Raheem Sterling at the death causing a nail-biting end for the Reds fans in north London.

Chelsea and Crystal Palace meet in the second semi-final at Wembley on Sunday.

The game started perfectly for the Reds with Ibrahima Konate opening the scoring just nine minutes into the contest as he powered in a header from an Andy Robertson corner.

While that looked like a pretty textbook goal, the second, eight minutes later, was anything but as Steffen endured a Wembley moment to forget.

An innocuous back-pass was rolled to the American goalkeeper who took far too long on the ball with Mane closing him down at pace.

Inexplicably he did not get rid of the ball as Mane lunged in and the Liverpool forward bundled the ball into the net, leaving Steffen on the deck and thoroughly embarrassed.

Jesus did have a good chance, through on goal against his compatriot but Alisson turned it wide, but Mohamed Salah also had a good opportunity to reinstate a three-goal lead, but his chip over Steffen drifted wide.

Talk of this rivalry being a bit too respectful was not on obvious display at Wembley with tackles flying in and yellow cards being flashed. Fernandinho the worst culprit for a pretty outrageous lunge on Mane which rightly received a booking and wasn’t too far off a red.

Jurgen Klopp’s side were impressive in keeping the sting out of the game and not allowing City to build any momentum, despite needing a huge turnaround.

Pep Guardiola is often reluctant to turn to his bench and he was again, with a change not coming until 83 minutes in when Riyad Mahrez replaced Jesus.

Mahrez did have an impact as he managed to get to the bye-line as the clock ticked past 90 and his shot bounced into the path of Bernardo Silva, who tapped home.

It was too late, though as City could not strike again and Liverpool held on. Just.