Raheem Sterling, Luke Shaw and Jordan Pickford have been immortalised in street art after being voted as England’s top three players from Euro 2020.

The mural, which has commissioned by Sky Q to celebrate the launch of live football broadcast in Ultra HD with HDR for the first time, was created by Bristolian street artist Jody Thomas and can be found on Tottenham High Road – near the new Tottenham Hotspur Stadium.

The artwork, which took more than 70 hours to complete, marks Sky’s latest step to make HDR the new standard for home entertainment with the introduction of HDR to live sport when Brentford face Arsenal in the Premier League season opener on Friday night.

Thomas, the street artist who brought this creative painting to life, said: “This summer we saw how football has the fantastic power to bring people together – sharing each other’s passion for the sport is really special! “Seeing the fans get up close and personal with the nation’s favourite players, with my latest mural for Sky Q, has been amazing.”

Sterling, Shaw and Pickford were chosen after a poll of more than 2,000 football fans chose them as England’s top performers of Euro 2000 ahead of Jack Grealish, Harry Maguire and Harry Kane.

Bukayao Saka and Marcus Rashford, who both missed penalties in the shoot-out against Italy in the final, were also named in the top 10. 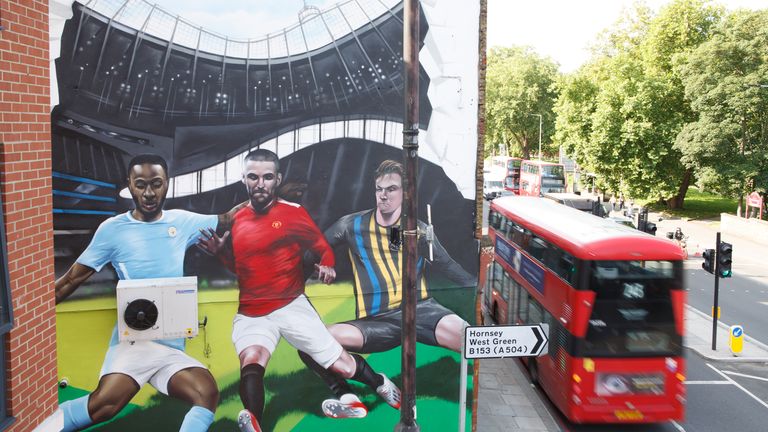 Fraser Stirling, Group Chief Product Officer, Sky, said: “From a lifelike mural of the league’s best players in the streets of Tottenham, to broadcasting the Premier League live in HDR on Sky Q, we’re bringing you even closer to the action.

“For fans of the beautiful game, watching in Ultra HD with HDR is the ideal viewing experience for best picture quality, right in the heart of your home.”

Then simply press the red button during the game to watch in Ultra HDR.

To find out more and to sign up to Sky Q from £25 per month on an 18-month contract, head to sky.com/tv.

Tags: and, Luke, Raheem, Shaw, Sterling
You may also like
Latest Posts