Rangers 1-0 Hibernian: Steven Gerrard’s side extend their lead at the top of the Scottish Premiership to 19 points with 12th league victory in a row thanks to Ianis Hagi’s winner

Relentless Rangers survived another tough test of their title credentials as Ianis Hagi’s strike earned the Scottish Premiership leaders a 1-0 victory over Hibernian at Ibrox.

Steven Gerrard’s team had not dropped points in any of the 12 games since they last faced Jack Ross’ team at Easter Road back in September.

But they were made to fight all the way to the end to claim their 13th straight win against the determined visitors and go 19 points clear of Celtic in the Scottish Premiership.

Rangers were well on top in the first half and capitalised through a rejuvenated Hagi’s second goal in as many games. 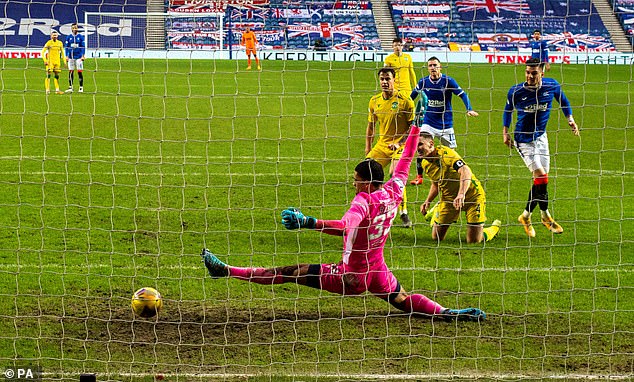 But Hibs were not so easy to shrug off after the break and the Light Blues had to dig in during the final stages to extend their impressive winning run.

Leon Balogun’s return in place of Filip Helander at centre-back was the only change to the team who won in Perth on Wednesday as Alfredo Morelos was again left kicking his heels on the bench.

The visitors were without the suspended Christian Doidge while on-loan QPR goalkeeper Dillon Barnes came in for his first Premiership start after first-choice stopper Ofir Marciano tweaked a hamstring in midweek.

Ross was forced to name goalkeeping coach Craig Samson among the substitutes two years on from his last professional appearance. 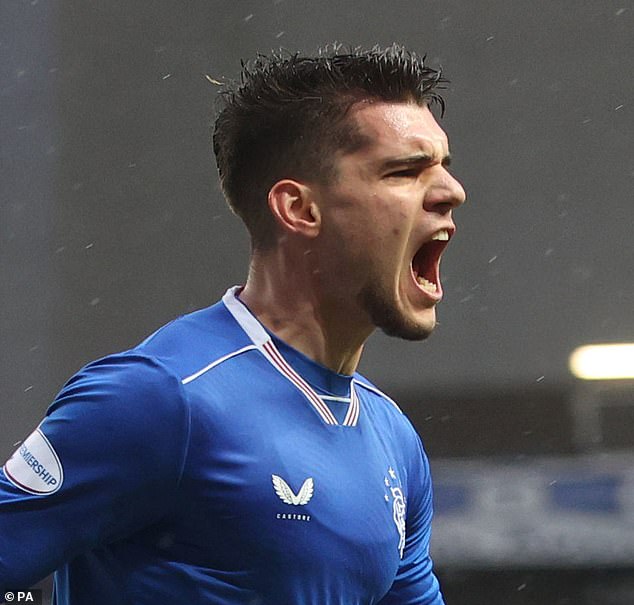 If there has been one vulnerability in the Rangers defence this season it has been their ability to cope with low balls slung to the back post.

Josh Doig found Martin Boyle lurking inside the first minute – this time, however, the winger could only fire into the side netting.

Rangers soon settled after that early scare and quickly pinned down Hibs after bossing 71 per cent of the possession.

Paul McGinn had to clear from underneath his own crossbar when Balogun was bizarrely left in five yards of space to collect Joe Aribo’s cut-back while Connor Goldson powered straight at Barnes before Doig cleared. 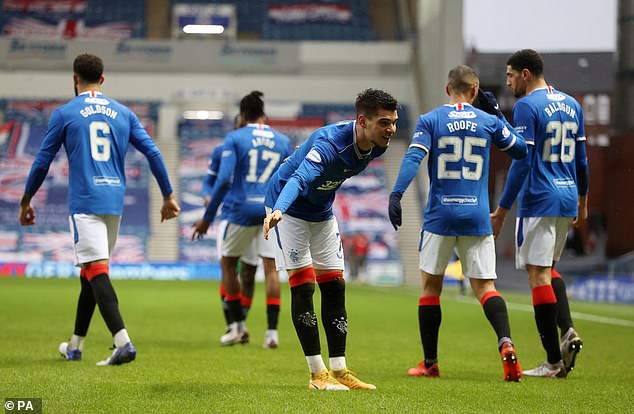 The ball only made it as far as Tavernier, who had a half-hearted appeal for a penalty waved away by Willie Collum after his foot was tripped by Alex Gogic.

Rangers continued to threaten, with Hagi shifting the ball onto his right foot before firing off a shot which squirmed wide just as Ryan Porteous slid in, but there was no one keeping tabs on the Romanian moments later as Rangers took the lead.

Glen Kamara fed Kemar Roofe in the box, with the former Leeds and Anderlecht hitman’s cross sneaking through Porteous’ legs to find Hagi rushing past a sluggish Paul Hanlon to hook home. 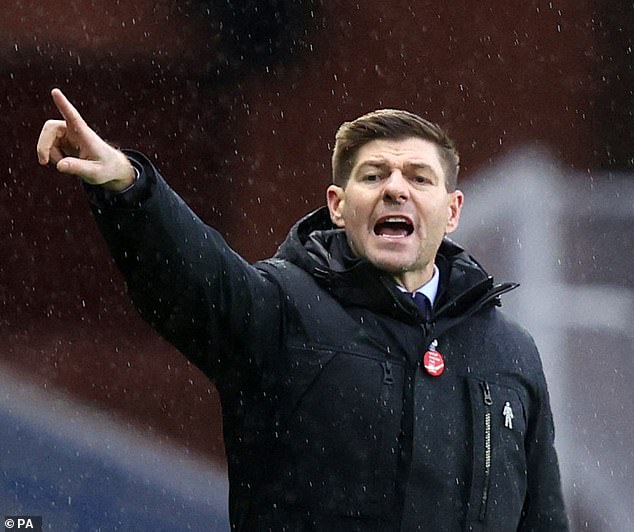 Hibs had a chance to hit back immediately as Boyle burst through but Goldson did well to match the Leith speedster stride for stride, forcing him wide and into a shot that was never troubling Allan McGregor.

Rangers were not quite so slick as the action resumed after the break, which only offered Hibs encouragement. Collum, however, had no interest in what looked to be a pretty strong spot-kick claim just after the hour mark as Hagi’s high boot brushed Joe Newell’s face when the Rangers player tried to clear a bouncing ball in the box.

That close call seemed to jolt the Ibrox team into some urgency and they upped their attempts to secure a second. Roofe fed in Kent but McGinn produced a vital last-ditch tackle, while Barnes made another solid stop to deny Balogun from six yards out.

But with Boyle’s pace, Ross’ team remained a threat on the counter and Goldson was also forced to dive in and block as Melker Hallberg’s pass sent the Hibs forward racing into shooting range.

Hagi then lost track of Newell as the visitors came forward again, allowing the former Rotherham man to swing in a cross which Kevin Nisbet really should have tucked away.

Hibs were throwing all they had at the league leaders, and McGregor had to sprawl down to his left to push away Hallberg’s swerving shot before Borna Barisic got an important toe in to deny Nisbet on the rebound.

Morelos’ introduction with eight minutes left helped alleviate some of the pressure Rangers were coming under as Hibs racked up the corners but the Colombian missed the latest chance to break his three-month scoring drought in the league as he fired straight at Barnes in stoppage time.