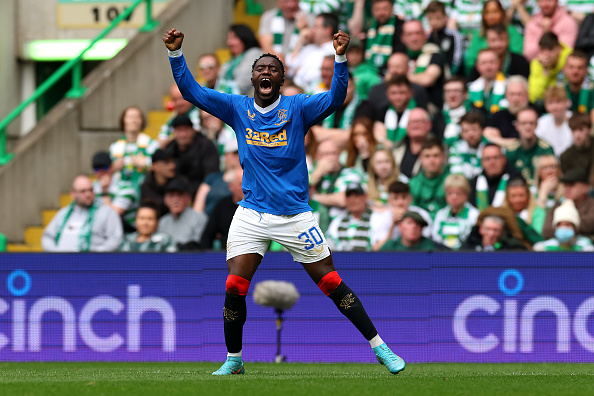 Ange Postecoglou’s side needed a win against their arch rivals to all but secure the league title and they were rewarded for their early dominance when Jota nearly finished after a mazy run from Daizen Maeda.

Rangers were on the ropes and the Bhoys had plenty of opportunity to double their lead but they failed to find that all-important second, with Maeda guilty of squandering the best chances.

Celtic Park was rocking after the interval but the mood was turned on its head when Sakala smahed home from a tight angle from Ryan Kent’s pass in the 69th minute.

The Zambian found the bottom corner at the near post and replays showed Joe Hart could have done better but the visitors couldn’t have cared less as they were level.

An excitable crowd suddenly turned nervy, with the emotionally-charged home support appealing ferociously for every decision.

Supporters thought they had a penalty when John Lundstram handled in the area but the referee deemed his arm was in a natural position.

Hart was then the hero as he saved from a Scott Arfield chance with six minutes left on the clock but Rangers should have found the winner when Sakala was through one-on-one moments later, only to be denied by the post when he beat the onrushing Hart.

The draw means Celtic’s title celebrations are on ice and they will get their hands on the trophy barring a late and unprecedented slip-up, given the club’s six-point advantage with three games remaining.

Rangers’ display was spirited, particularly after their efforts in Europe on Thursday when they were beaten 1-0 by RB Leipzig.