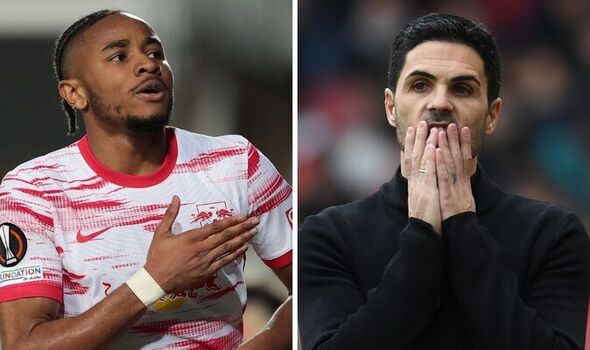 Arsenal may have to move quickly in a bid to sign Christopher Nkunku this summer with RB Leipzig reportedly holding a ‘secret meeting’ with the midfielder’s agent to discuss a new contract. Bolstering Arsenal’s attacking options in the summer is a top priority for transfer chief Edu.

Alexandre Lacazette is out of favour at Arsenal heading into the final few weeks of the season with the Frenchman set to leave as a free agent. It’s been suggested that the club are still hoping to convince Eddie Nketiah to sign a new deal, but signing at least one forward will be the top priority in the summer transfer window.

Arsenal missed out on signing Dusan Vlahovic in January as the club looked to bring in a replacement for Pierre-Emerick Aubameyang. Juventus won the battle for the Serbia international’s signature with Arsenal unable to promise regular Champions League football.

That could all change this summer though with the Gunners currently occupying fourth place with a handful of games remaining. Qualifying for next year’s Champions League would give Arsenal a huge boost in their targets for the transfer window and Nkunku is reportedly on their list of options.

The 24-year-old has enjoyed an incredible season in front of goal, scoring 31 times in all competitions as well as providing 20 assists. His versatility to play anywhere across the frontline has led to plenty of interest across Europe and Leipzig will undoubtedly be expecting some approaches this summer.

But Bild claim the Bundesliga outfit are fighting to keep Nkunku at the club with a ‘secret meeting’ taking place with the forward’s agent, Pini Zahavi. Leipzig CEO Oliver Mintzlaff reportedly made it clear that the club do not want to sell Nkunku and want to open discussions on a new deal.

Nkunku has been a regular fixture in Leipzig’s attack since joining from Paris Saint-Germain in 2019. He was largely used in a deeper midfield position after breaking through the ranks at PSG, but has since thrived in a more advanced role for Leipzig.

Particularly this season, Nkunku has largely played through the middle for Leipzig where has been a main source of goals. But Arsenal may struggle to prise the versatile forward away from Leipzig this summer if contract negotiations take place.