Real Madrid have defeated Barcelona 2-0 in the La Liga's latest clasico on Monday (AEDT) to end a seven-match winless streak against their rivals.

Vinicius Junior scored in the 71st minute with the aid of a deflection before substitute Mariano Diaz sealed the victory in stoppage time to give Madrid a one-point lead over Barcelona and halt the team's recent struggles.

Zinedine Zidane's Madrid were winless in three games in all competitions and hadn't won at home in three consecutive games before Barca's arrival. 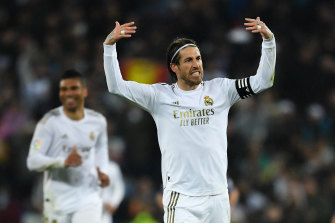 Barcelona looked the most dangerous in the first half but Madrid took control after half-time, opening the scoring after Vinicius Junior found the net with a shot that deflected off Gerard Pique's leg and beat Marc-Andre ter Stegen at his near post.

Diaz added the second from inside the area near the end.

Lionel Messi had a quiet night in his club record 43rd clasico appearance and his frustrations boiled over when he was shown a late yellow card for a hard foul from behind on Madrid midfielder Casemiro.

Former Real Madrid forward Cristiano Ronaldo was among the nearly 80,000 in attendance at the Bernabeu, as were players from the Wuhan Zall soccer team based in the Chinese city of Wuhan, the epicentre of the virus coronavirus outbreak.

The Asian team arrived in Spain in January for pre-season training but still doesn't know when it will be able to return home.

Elsewhere, Atletico Madrid's struggles away from home continued with a 1-1 draw at last-place Espanyol, a fourth consecutive winless match as visitors in the league dropped them to fifth.

Espanyol went ahead courtesy of an own-goal by Atletico defender Stefan Savic in the 24th while Niguez equalised for Atletico with a neat volley from outside the area after the ball was cleared from the box shortly after halftime.

Getafe ended a two-game losing streak in the league with a 1-0 victory at relegation-threatened Mallorca with a goal by Nemanja Maksimovic in the 67th.

The win moved the team from southern Madrid up to fourth.

Athletic Bilbao beat eight-placed Villarreal 1-0 at home to end a 10-match winless streak to be 10th.