Transfer update: How much have Premier League clubs spent?

Real Madrid have dropped a possible Sergio Ramos transfer hint amid uncertainty over his future at the club. Ramos is out of contract at the end of June and it looks as though he could finally be set to leave the club he joined in 2005.

Los Blancos are experiencing a tumultuous period at the moment, with Zinedine Zidane stepping down as manager following a disappointing 2020/21 season.

Real finished second in La Liga behind rivals Atletico Madrid and lost in the semi-finals of the Champions League to eventual winners Chelsea.

Zidane took the decision to walk away from the job last week and has since been replaced by Carlo Ancelotti, who is leaving Everton to re-join the club he managed between 2013 and 2015.

The managerial situation is not the only thing set to change at Real, with the make-up of the playing squad under consideration too.

Luka Modric has already signed a contract extension, while Lucas Vazquez is reportedly ready to follow suit and commit to the club until 2024.

JUST IN: Man Utd have five reasons for wanting to sign Kieran Trippier 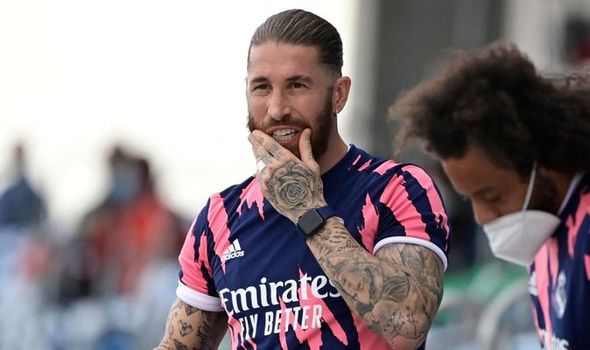 However, central defence appears to be an area of uncertainty, with Raphael Varane attracting the interest of Manchester United among others and Ramos on the verge of becoming a free agent.

The 35-year-old defender is yet to agree to a contract extension with president Florentino Perez and has been the subject of intense transfer speculation.

Ramos reportedly wants to stay with the club he has served for the last 16 years and is set to hold crunch talks with the Real hierarchy this week.

Manchester United and Manchester City have both been linked with him in recent weeks, with ESPN reporting that City are weighing up the idea of giving him a performance-based two-year deal.

That eventuality has seemingly become more likely after Ramos was not involved in the launch of Real’s kit for next season.

MARCA reports that Ramos wasn’t present at the photo shoot for the new Adidas kit, which was revealed on Tuesday, in a departure from normal protocol.

As a club stalwart, Ramos has previously featured heavily in marketing campaigns, but did not appear in the campaign this week, for which the photos were taken weeks in advance.

The Spanish newspaper says the fact Ramos is not an Adidas player does not explain his absence because players like Vinicius and Rodrygo did take part despite not being signed to the German manufacturer.

The situation bears a resemblance to Cristiano Ronaldo, who did not feature in Real’s photo shoot in the summer of 2018 before his move to Juventus was made public.

Whether Ramos leaves Real remains to be seen, but it seems like the club are not taking any chances with their merchandise.