Real Madrid star Lucas Vazquez has reportedly turned down the opportunity to join rivals Atletico Madrid this summer. Vazquez’s future has been the subject of plenty of speculation recently, with his current contract set to expire next month.

Real risked losing Vazquez for nothing in June and the 29-year-old has heard the proposals of several clubs over the past few months.

Vazquez has been with Madrid since 2007 and has won a host of trophies, including three Champions League titles.

The forward has proven himself useful to manager Zinedine Zidane this season, often filling in at right-back in the absence of Dani Carvajal.

He has contributed two goals and seven assists in 33 appearances across all competitions so far and could feature in the second leg of Real’s Champions League semi-final against Chelsea on Wednesday.

While uncertainty has swirled over his future, Vazquez has been the subject of interest from Manchester United, Chelsea, Everton, Paris Saint-Germain and Bayern Munich since January, when he has been free to negotiate with other clubs. 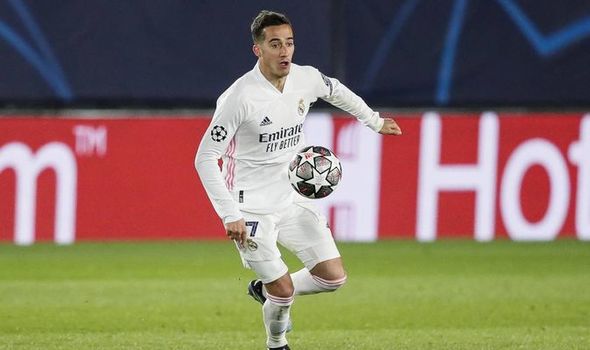 According to Spanish newspaper AS, Real’s rivals Atletico Madrid have also made an offer to Vazquez recently.

Being a Real fan and long-time player, he did not entertain the offer from Atleti, while another proposal from AC Milan has also been rejected.

Instead of leaving, Vazquez is reportedly ‘on the verge’ of signing a three-year new deal with Real, increasing his weekly wages from £60,000 to £84,000.

AS reports that Vazquez’s top priority is to stay in Madrid and he would only consider other clubs if negotiations break down.

The newspaper also says that Sergio Ramos could play an important part in Vazquez’s future, with the two players very close friends.

Ramos is out of contract in June but is angling for a new contract with Los Blancos, who, according to Marca, have made an offer of a one-year extension.

However, the 35-year-old defender is keen to secure his future for a further two years in the Spanish capital, so negotiations remain ongoing.

Real are second in La Liga, level on points with Barcelona and two adrift of Atleti, with four matches remaining after all three sides won their games on the weekend.

Zidane takes his side to Stamford Bridge on Wednesday to face Chelsea in the second leg of the Champions League semi-final.

Chelsea have the edge in the tie thanks to Christian Pulisic’s away goal, but Karim Benzema’s equaliser has set up an intriguing second leg.