Sergio Ramos has more experience than most of facing up against Lionel Messi but, despite the tense rivalry between Real Madrid and Barcelona, the central defender has the utmost respect for the Argentine superstar. The battle for the Spanish league title will take a new twist tonight with one of the biggest El Clasicos in recent years.

Barcelona sit top by two points with Real having the opportunity to leapfrog their arch rivals.

Messi, who is enjoying yet another incredible season at the Nou Camp, will no doubt be crucial if Barcelona are to pull away from Real in the race for the title.

But Ramos and the Real defence have done well to keep Barcelona’s talisman at bay in recent matches with Messi failing to score in the last four El Clasicos.

The Spain international holds nothing back when it comes to winning at all costs in an El Clasico, being sent off five times in the famous fixture during his career. 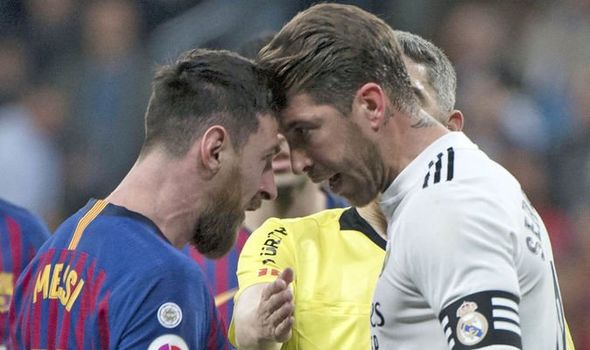 On two of the occasions he was sent off it was for rough challenges on Messi.

But while Ramos will once again be doing all he can to prevent Messi from taking over tonight, the centre-back admits he holds the Barcelona frontman in the highest regard.

“I hope Sunday isn’t his day, that would mean we’ve done our job, and if on top of that we can get a good result even better.”

He added: “I wish him all the best as a fellow professional but only as long as it doesn’t affect us negatively!

“It’s hard, but he has my maximum respect, I think he’s one of the best.”

Tonight’s fixture against Barcelona will be the 43d time Ramos has faced off against Real’s arch rivals and he knows more than most what a win would mean going forward.

“To be the player with the most El Clasico appearances is a massive source of joy. I hope that I can go on and play in many more,” he said.

“That’d be a good sign, because it’d mean that I was here for many more years.

“It’s not just any other game. Despite there just being three points at stake, as there is in every game, El Clasico is a game unlike any other.

“Beating Barcelona would bring us great joy. What’s more, it usually has a really positive impact on the group in terms of morale.”