Red Bull Salzburg have demanded £300million plus Bruno Fernandes in response to Manchester United joining the race for their striker Benjamin Sesko.

The Red Devils have reportedly shown interest in the 19-year-old talisman alongside Newcastle United, Bayern Munich and Borussia Dortmund.

However, the Austrian side have issued a tongue-in-cheek reply to the reports that Manchester United are eyeing a move for Sesko. 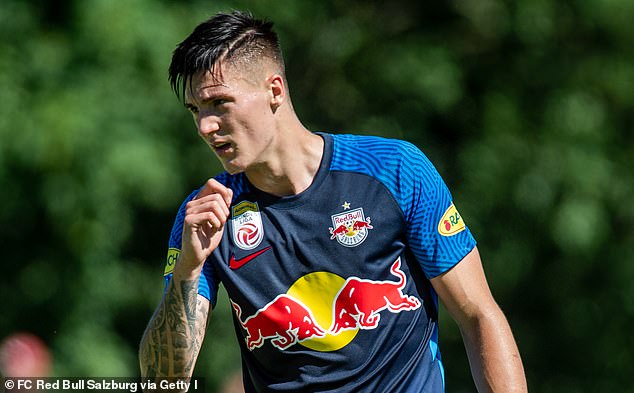 The highly-rated striker is Slovenia’s youngest ever goalscorer and has received widespread praise for his goalscoring exploits.

Sesko managed 10 goals and seven assists for Salzburg last season, while he already has one goal and one assist after the opening game of this campaign.

His impressive form has attracted plenty of attention from potential suitors, although the 6ft 4ins striker has a contract tying him down until 2026 at the Red Bull Arena.

Therefore Salzburg have the ability to demand a hefty fee for Sesko and have done so amid the interest from Manchester United.

The Red Devils are on the hunt for a new forward as Cristiano Ronaldo’s future at Old Trafford remains up in the air.

The striker did not join Erik ten Hag’s side for their pre-season tour and would like to leave United if the right offer comes in. The 37-year-old is set for talks over his future with manager ten Hag today.

Striker Anthony Martial has enjoyed a good pre-season, netting three goals in four games but it remains unclear whether he will be Manchester United’s first-choice No 9 ahead of the upcoming campaign.

A move for Sesko would future-proof the Red Devils’ forward line for years to come and, while they would have to part with a hefty fee for him, it would not take £300m and Fernandes to secure his signature.