Reds Herring! Liverpool boss Jurgen Klopp laughs off the conspiracy theories over his Kop future as he prepares his side to take on RB Leipzig

Is he going? Those three little words spread around Merseyside on Saturday night like wild fire, as Jurgen Klopp’s future became the source of intense speculation.

By Sunday afternoon, it had gone further. Liverpool’s manager was — according to perceived wisdom — effectively out of the door after a dressing room fight between goalkeeper Alisson and left back Andrew Robertson.

No city does rumours quite like Liverpool, particularly when its clubs are floundering. Mischief, social media and bad results made a potent concoction for the gossips, who had painted a picture that a 3-1 defeat at Leicester would be the full stop on Klopp’s Anfield reign. 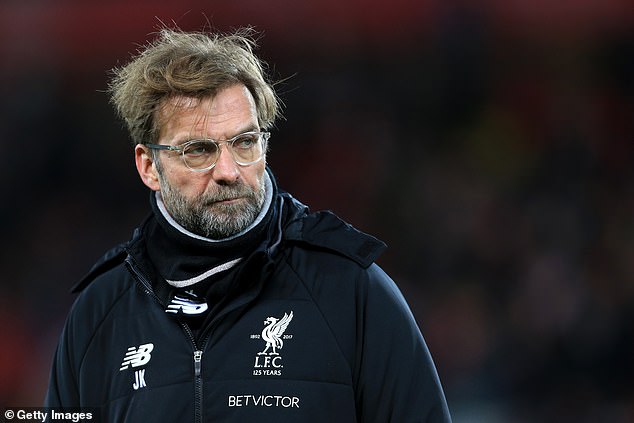 ‘What were the rumours again? Did I get the sack or did I leave by myself?’ said Klopp on Monday lunchtime, his self-deprecating question defusing the subject.

The light touch was a perfect way to put a pin in what captain Jordan Henderson had described as ‘total nonsense’.

‘Someone is sitting behind a keyboard making up rumours about the manager,’ said Henderson. ‘It’s not true. Saying that, I quite liked the one where Robbo and Ali had a fight! That made us chuckle!’

The conspiracy theorists had been given ammunition by the way Klopp reacted to a question from a Sky Sports reporter at the King Power Stadium, when he appeared to get emotional after being asked whether he was conceding the title. Fantasy and reality, however, are different things. 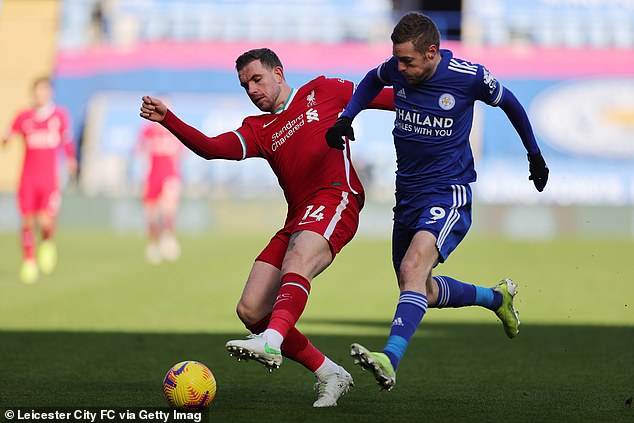 The Spanish winger scored one of the biggest goals in Leipzig’s history when he helped them reach last season’s Champions League semi-final. Quick and direct, he will keep Liverpool’s right back busy.

THE Denmark international has been a key player for Leipzig and was the first to reach 250 appearances for the club.

At 6ft 4in, Poulsen is a menace in the area and will test Liverpool’s captain in his emergency defensive position.

The France international is one of Europe’s most talked about defenders and will join Bayern Munich next season. Keeping Liverpool’s leading scorer in check will be crucial if Leipzig wish to progress.

The reason Klopp put his head down initially was because he was so exasperated to be asked the same question that he has answered many times over the last four weeks, as Liverpool’s form has tailed off.

He has been through a dreadful ordeal, of course, after his mother Elisabeth died late last month. That personal trauma, however, has not caused him to re-evaluate his professional circumstances nor, he says, has it led to him taking his eye off the ball.

Liverpool might be in the worst form of his five-and-a-half-year reign as the Champions League resumes for them in Budapest against RB Leipzig on Wednesday, but Klopp understands the reasons it has happened — and is ready, to use one of his favourite sayings, to strike back.

‘I don’t need a break,’ he said. ‘Look, the last thing I want to do is talk about private things in a press conference. Everyone knows that we have been through an absolutely tough time but that was three weeks ago. We always deal with it as a family, 100 per cent.

‘When I came here to the football club, to work… I’m 53. I’ve been in football 30 years, a coach for 20. I can switch off. I do not carry things around. If I am private, I’m private. If it is football and it is the workplace, I am here. I’m not influenced by things that are happening around me.

‘We will sort it. While we are solving it, it could be tricky. You need results but we are Liverpool. I am ready. The boys are ready. We will give our absolute everything to sort it.’ 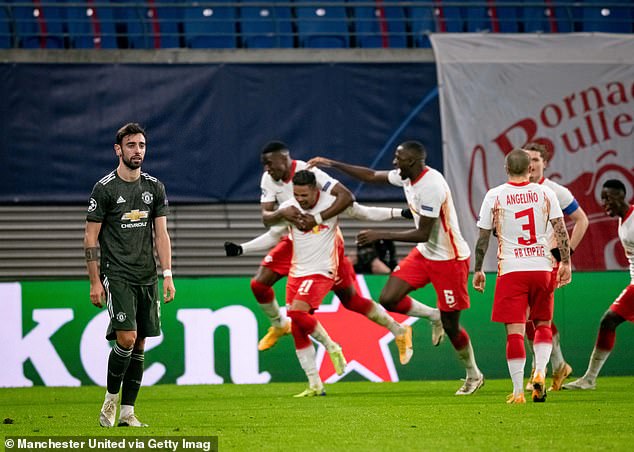 RB Leipzig beat Manchester United in the group stages, a result which knocked them out

Those four paragraphs are the truncated version of his answer, which lasted four minutes and spanned 500 words. This was more like the man to whom we have become accustomed: engaging and in good spirits. He hasn’t gone cold on anything, certainly not the ability of his team.

RB Leipzig, of course, present a formidable challenge in the last 16 and they showed when dispatching Manchester United from the competition that they can score freely and quickly. But they are meeting a Liverpool team with a point to prove. This bad form will not be terminal.

‘We, as players, take full responsibility,’ said Henderson. ‘I know the manager tries to protect us as much as possible but as players it is down to us to change the situation we are in. It is down to us to go out there and keep fighting. It starts now.’ 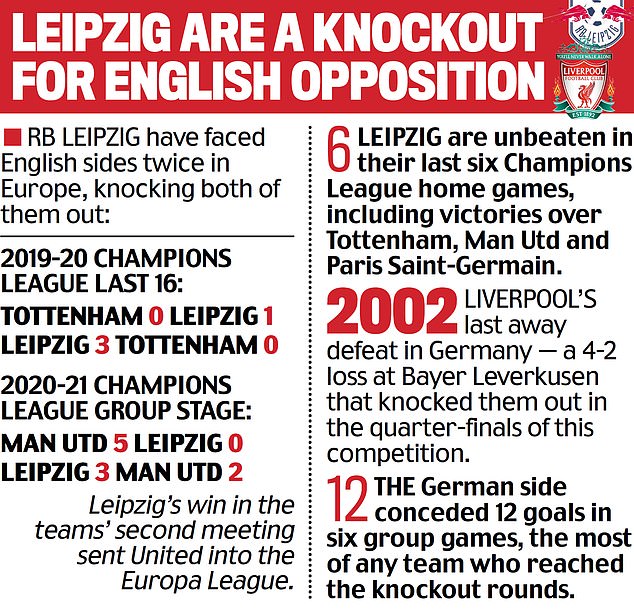