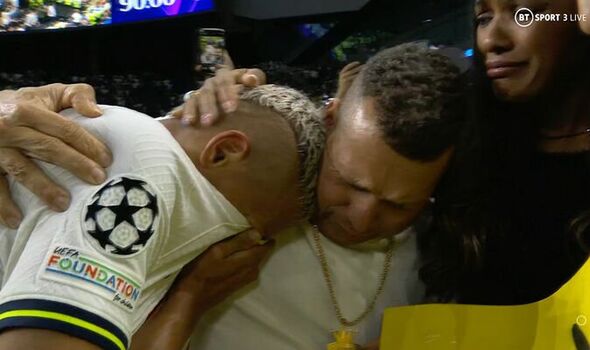 Tottenham forward Richarlison broke down in tears after he scored his first two goals for the club. The Brazilian marked his Champions League debut with a brace against Marseille in the 2-0 win on Wednesday.

Richarlison joined Spurs from Everton in the summer for a fee of up to £60million. He had to wait until Saturday’s visit of Fulham to make his full debut for the club.

He thought he had opened his Tottenham account late in that match but for his goal to be ruled out for offside. Richarlison maintained his spot in Antonio Conte’s starting XI for the first Champions League match of the season.

And Conte was proven right to select him. After Marseille were reduced to 10 men, Richarlison scored two headers to seal victory for the hosts.

After the match, the 25-year-old went over to his family in the crowd. He was quickly overcome with emotion as he hugged his loved ones.

Ivan Perisic consoled Richarlison as he made his way back down the touchline and to the dressing room.