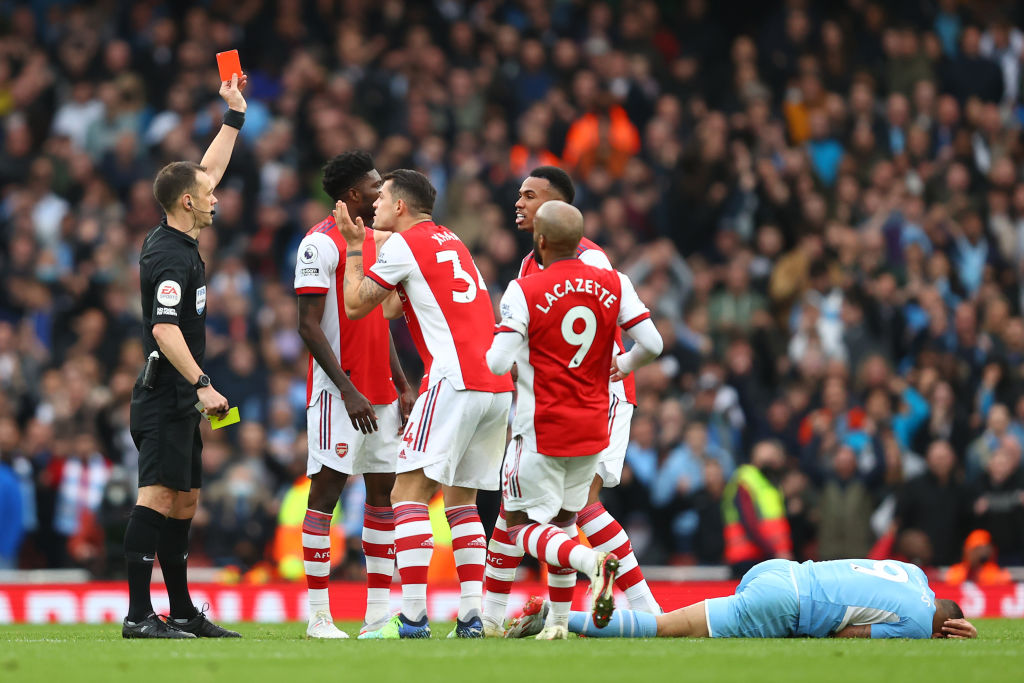 Manchester United legend Rio Ferdinand took aim at Gabriel after the defender was sent off in Arsenal’s 2-1 defeat to Manchester City, branding the Brazilian’s behaviour ‘stupid’ and ‘immature’.

Bukayo Saka gave Arsenal the lead just past the half-hour mark to send the Emirates crowd into raptures, but Riyad Mahrez equalised with a penalty in the 57th minute after Gabriel was booked for trying to scuff up the spot.

A frustrated Gabriel was given his marching orders just two minutes later for a petulant foul on fellow countryman Gabriel Jesus and the red card proved costly, with the visitors capitalising on their one-man advantage as Rodri struck in stoppage time.

Pep Guardiola’s champions held firm to secure victory which put them 11 points clear of second-placed Chelsea at the top of the Premier League table, while Arsenal remain six points adrift of Liverpool in fourth.

Reflecting on Gabriel’s second yellow card, ex-United and England defender Ferdinand told BT Sport: ‘This is stupid, this is immature, this is petulant. A penalty against your team… what do you think you’re achieving by doing that?

‘This is where the stupidity enhances itself. He’s not going in on goal, he’s not a threat, he’s in the middle of the pitch and straightaway after that incident you commit a silly foul like that.

‘You’re in disbelief, I don’t understand it.’

Ferdinand added: ‘You’ve got time to think, you know know you’re on a yellow card. You get a yellow card in a game and automatically you think, “Right, I’ve got to adjust the way I approach certain situations now.”

‘He doesn’t see that the referee is only 10 yards away and he’s half a pitch away from the goal area where there’s going to be a danger. There’s no danger.’

Ferdinand urged Gabriel to look to the likes of Ruben Dias and Virgil van Dijk to learn how to keep composure in the heat of battle.

‘He’s got to be the leading centre half here at the moment and you’ve got to curb that. You’ve got to take the emotion out of the situation,’ he went on.

‘When you’re in the heat of battle you won’t see Dias doing that, you won’t see Virgil van Dijk doing that. They then calm the others around them, that’s what leaders do.

‘You can get amped and uptight in a situation. But when the game restarts you have to have laser focus back on the job.

‘He is the total opposite of that. Maybe it’s inexperience but that’s something I feel people behind the scenes at Arsenal really need to get a hold of because you can’t continue losing people.’

Gabriel was applauded off the pitch after his sending off, but Ferdinand said the Brazilian’s team-mates would have been furious with his behaviour.

‘Trust me, the fans might have clapped him off but the other 10 players on the pitch won’t be thanking him at all.

‘They’ll be devastated, they’ll be gutted with that and they’ll be in there with eyes on him.

‘He can curb that, he’s just got to really understand what he’s doing and take it on board.

‘Take responsibility for it and actually make a concerted effort to try and manage himself through periods like that in games.’