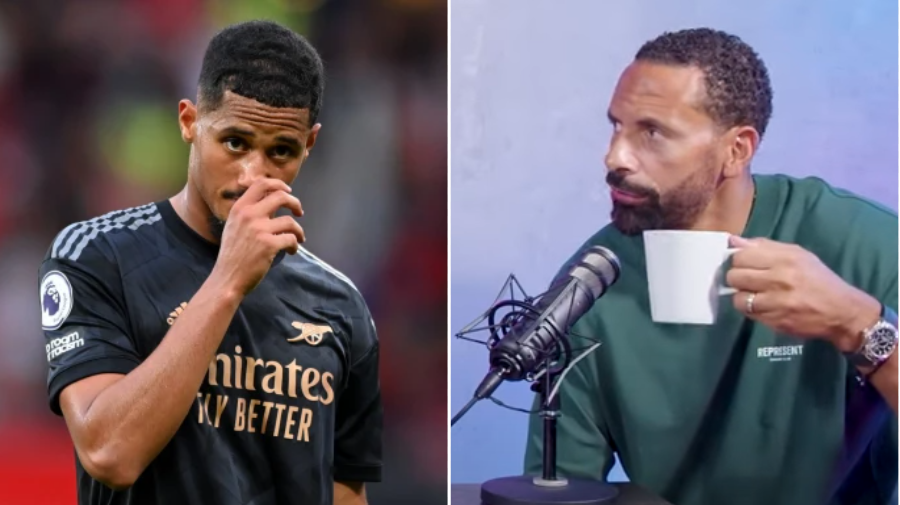 Rio Ferdinand has warned Arsenal fans to stop overhyping William Saliba and named four Premier League defenders who were better than the France international at the same age.

Saliba had impressed during the early weeks of the new season, playing a key role in a run of five successive victories which had propelled Mikel Arteta’s new-look side to the top of the table.

The Gunners, however, failed the first acid test of their credentials on Sunday when they were punished by a rejuvenated Manchester United who capitalised on Arsenal’s defensive naivety.

Marcus Rashford scored twice on the counter-attack to help United secure three valuable points with Saliba, caught out by the England forward’s movement, arguably at fault for both goals.

Saliba’s early performances, having finally made the breakthrough at Arsenal three years after joining from Saint Etienne, had drawn comparisons with Ferdinand on account of his elegance and confidence on the ball.

Ferdinand, however, dismissed those comparisons and picked out four of his former international teammates who he felt were performing at a higher level than the 21-year-old Saliba at the same age.

‘Wes Brown at 21. He was winning Champions Leagues. He was in the treble winning team, he played games in that team’.

On Saliba’s peformance at Old Trafford, Ferdinand added: ‘He failed the Rashford test. You don’t need to put this pressure on Saliba, he’s just five games in just let him play.

‘You’re salivating over Saliba but he’s probably in the changing room thinking I’ve got my DNA on two, maybe three, of the goals in some way shape or form.

‘Some people might say three, I’m saying two. His fingerprints are on two of the goals and he’s sitting there with 0 points from the game.

‘He’s playing offside. The manager’s not told him to do that. They didn’t play offside at any other time in that game.

Despite that criticism, Ferdinand is confident Saliba will develop into a top class central defender if he is allowed to progress without the pressure of being compared to all-time greats.

He said: ‘I actually think Saliba’s got a really good chance of being a really, really good player. He just needs time.

‘All this pressure you’re putting on him putting him up against people I don’t think he needs it. He was on loan last season. His first big test lets be honest was at Old Trafford in a big signature game.

‘As a centre-back you cannot sit there and say he played well when you’ve conceded three goals, please don’t try and tell me that. He’s finished with three goals in his net.

‘You can’t say that, I wouldn’t embarrass myself. I’m not saying he’s not a good player, you can’t sit there and concede three goals and lavish him.

‘Personal pride would not allow it. If we’ve conceded a goal, or two goals in a game and we’ve lost and no goals are a direct fault of mine we take it as a team.’