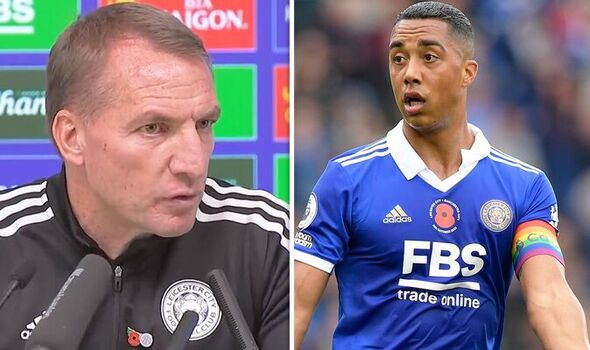 Leicester manager Brendan Rodgers insists he would love Youri Tielemans to sign a new contract amid reports the Foxes are scouting his replacement. Arsenal have a long-standing interest in the midfielder, whose current deal with the Foxes expires at the end of the season.

Arsenal are set to be active in the January transfer window in an attempt to build on their superb start to the campaign in the Premier League. After a quiet couple of months, Tielemans has started to return to the form he previously showed on a regular basis at Leicester.

With his deal coming to an end, Arsenal may feel they could lure the Belgian on the cheap. 90min.com claims Leicester have scouted Lorient star Enzo Le Fee as a potential replacement if they were to lose Tielemans.

But Rodgers has not given up hope on the 25-year-old signing an extension. Tielemans has featured heavily for the Foxes this term and Rodgers insists he has acted with the utmost professionalism.

The former Liverpool boss said: “In terms of fitness he’s been okay hasn’t he. I think he’s played a lot of the games.

“He’s been a fantastic professional for us and even though he’s in the situation with his contract, he’s never wavered from his mentality and what he gives to the team. Youri provides the team with the great knowhow in the game, wonderful player to work with.

“Like I said I will just continue to work and develop his game whilst he’s here for however long that is. I would love him to sign another deal and continue his journey here at Leicester City. But we will see in the coming months.”

Speaking during a recent international break, Tielemans insisted he was happy at Leicester and he would only leave if the right move became available. He said: “I’m not going to speak too much about my contract situation at the moment.

“My family is very happy there and that’s important. I didn’t leave Leicester in the summer as I always said the project had to be the right one. Just because things are getting worse now at Leicester doesn’t mean I should regret [staying].

“That World Cup has nothing to do with it. It is always an honour to play for the national team and a World Cup is always special.

“Whether you are in your last contract year or not. It’s also not the case that I talk to the club every day about my extension or not. That’s work for my agent.

“In the end I will decide. There was talk of different clubs, but I won’t go into that.”