Melbourne Victory star Marco Rojas will travel to New Zealand to face Wellington Phoenix despite not being fully fit, while Adama Traore will miss another match due to injury. 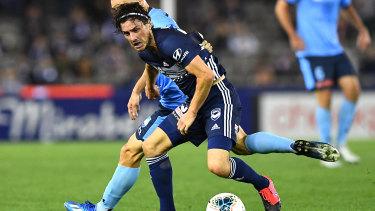 Rojas came off during last week's dismal defeat to Sydney FC with an ankle injury while Traore missed that match because of a hamstring.

"Rojas, he didn’t finish the game and now he is working and travelling tomorrow," Victory coach Carlos Salvachua said on Thursday.

"It is not perfect but he is travelling."

Salvachua, who was uncharacteristically annoyed with his side after the defeat to Sydney, said the squad had addressed the problems from that match during the week.

"It is not easy after losing a game like the other day," he said.

"Now we are professionals and we have to look forward.

"We tried to analyse together why these kind of things happened in the second half. And now we play away against another good team, and we have to win.

"They tried to win the game at the end and they feel that is the best option sometimes, it is human when you are losing the game and you’re in front of the crowd and the members trying to score goals, but we have to see the best option was to do the same as we did in the first half."

Victory sit ninth on the A-League ladder with six games to play, seven points adrift of Western United who are sixth. Wellington are in third, three points behind Melbourne City with a game in hand and have evidently been one of the hardest sides to face all season.

While Victory's form is poor, at least the opponent they lost to last week in Sydney FC play a similar style to Wellington. The Phoenix have essentially copied and tweaked Sydney's system so the Victory should be well prepared.

"In our situation is not easy to play away against Wellington," Salvachua said.

"We work with the idea of [playing like we did in] the first half [against Sydney] like the other day, and we will see."

Captain and star striker Ola Toivonen has been cutting a frustrated figure recently as Victory's struggles take their toll. Salvachua said he is still firmly focused on success.

"The striker, when he is not scoring goals it is not easy for all the strikers, not just Ola," he said.

"He had chances in the last game and he is not scoring. Sometimes he is thinking about the situation, he is human."

Tim Hoogland will sit out this week's game after a controversial red card in the loss to Sydney FC. It caps off a frustrating year for the German, who had only just achieved a run of games in the team following injury problems earlier in the season.

"He [Hoogland] understands the referee decided it was a red card and he has to accept the decision. He has to work this week and next week and next week. It is not the best for him and for us because now we lose him again," Salvachua said.

Victory will travel to New Zealand as normal on Friday for Saturday's game, as their plans have not been disrupted by coronavirus.

They are based at AAMI Park with the Melbourne Demons and Super Rugby's Melbourne Rebels.

The Demons have moved their football program to Casey Fields, but at this stage Victory will remain at AAMI Park.

Salvachua said he had coached teams in front of empty stadiums before in Europe, and that if this measure had to be taken in the A-League, he would rather games be called off.

Tags: face, in, Rojas, squad, to, Welling
You may also like
Latest Posts