AC Milan 0-3 Inter: Romelu Lukaku and Lautaro Martinez strike again as Antonio Conte’s side pick up priceless derby victory to hold four-point lead over the Rossoneri at the top of Serie A

Some results are more than just three points. Inter Milan’s 3-0 crushing of AC Milan is a real indication that Antonio Conte can deliver a first Scudetto since the Jose Mourinho days.

Sunday’s San Siro clashed lacked the bite last month’s Coppa Italia had with Lukaku and Zlatan Ibrahimovic’s spat followed by Christian Eriksen’s shock winner – but this is the biggest indication that the Serie A title could end up somewhere other than Juventus for once. 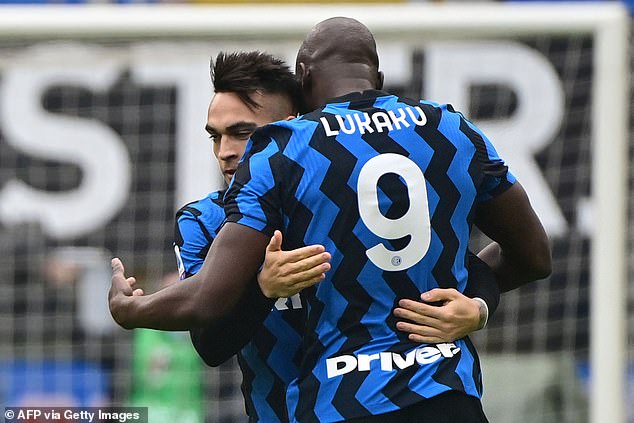 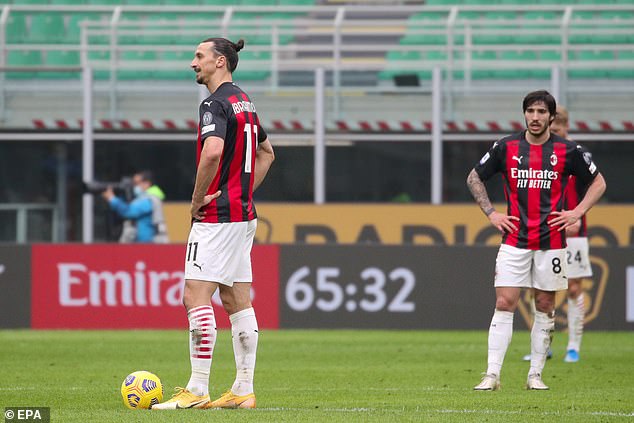 Inter refused to sit on their one-point lead at the top at the start of the match and it showed in the line-up. The more attacking Ivan Perisic was preferred to Ashley Young at left wing-back and Conte’s side started on the front foot.

Part of Inter’s rise to the top of the table has been the Lautaro-Lukaku partnership and it took just five minutes for the striker duo to combine in the biggest match of the season.

Milan would have seen how Belgian forward Lukaku tormented Lazio last weekend and the 27-year-old burst down the right unchallenged and – at the second time of asking – whipped a lovely ball for strike partner Martinez to head home an easy finish. 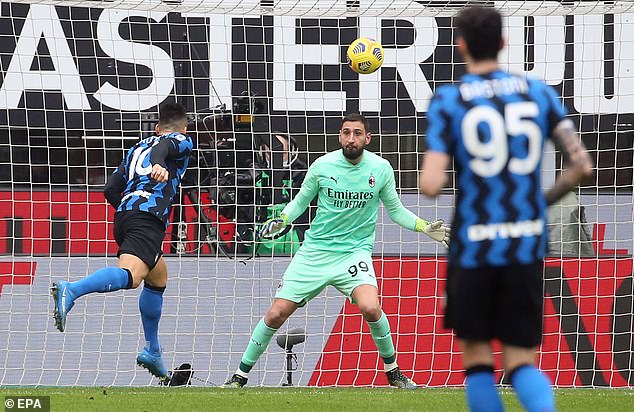 Another plus point for Conte in recent week is the return to form of Christian Eriksen. The ex-Tottenham man looked set for a January exit but a recent resurgence as seen him as a dangerous outlet once again.

His link-up play was clear to see as Inter threatened for a second. A clever one-two allowed Martinez to burst down the right, his cross tried to find Perisic at the back post but Davide Calabria cleared from a corner. From the resulting set piece, the Danish midfielder forced Gianluigi Donnarumma into a smart stop.

Yet there were first-half fears that Inter, as they did last year under Conte and earlier this season in January, would let early promise fade into disaster.

A mix-up between Alessandro Bastoni, Stefan De Vrij and Marcelo Brozovic nearly gave Zlatan Ibrahimovic his first taste at goal. The Swedish striker nearly found the net in emphatic fashion with an exquisite backheel, but Samir Handanovic held his shot. 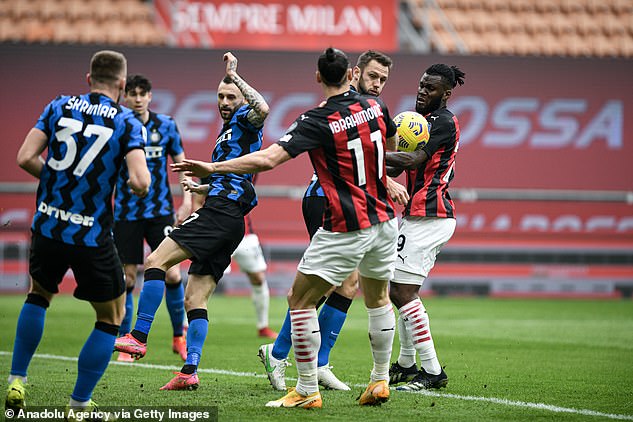 Later in the half, Inter were given another warning sign. Frank Kessie’s ball forward was cleared by Bastoni as far as Theo Hernandez – whose shot bobbled wide when given a clear chance on goal.

But it was a first-half that Inter still controlled as Conte’s side remained a threat on the break. Perisic crossed for Lukaku inside the six-yard box but the Belgian forward couldn’t apply a touch int the area while the wing-back stung Donnarumma’s palms with a fierce shot while Simon Kjaer’s challenge denied Martinez a second from a tap-in.

In the final action of the half, another counter-attack led to a free-kick which Eriksen delivered to Milan Skriniar at the back post – but the Inter defender headed over from inside the six-yard box.

Milan were second best to their opponents in the first-half and Stefano Pioli came out firing after the break. Within the first five minutes of the second-half, Ibrahimovic had forced Handanovic into two finger-tip saves from two headers, while Sandro Tonali forced another tip-over from the Inter shot stopper from the edge of the box. 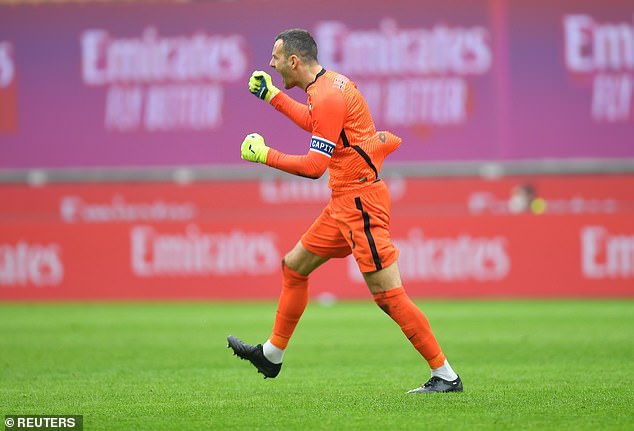 The Rossoneri’s quest to get back into the game continued with Ibrahimovic as the focal point again. The Swede headed down to Franck Kessie who fired over from inside the box.

But for all Milan’s endeavours, Inter’s counter-attacking mindset finally paid off. A superb breakaway saw Eriksen feed Perisic down the left. The Croatian played an intricate pass across goal to the unmarked Martinez who had a simple finish.

The strike was a sucker punch for Pioli’s men who continued to fall into the Inter trap. 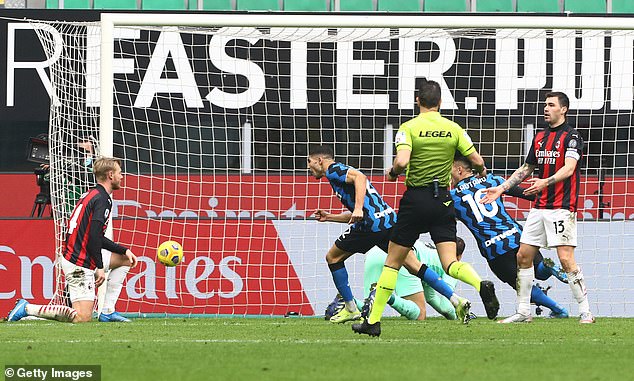 Top scorer Lukaku threatened to add a third by forcing Donnarumma into a save on the hour mark – seven minutes later he did not leave the Milan goalkeeper off the hook.

The Belgian burst past Alessandro Romagnoli and finished a run which started from inside his own half with a thumping finish in at the near post.

Conte ran down the touchline to congratuate Lukaku on his superb solo strike. That strike was more than just a goal – it was a pivotal moment in this topsy-turvy season. 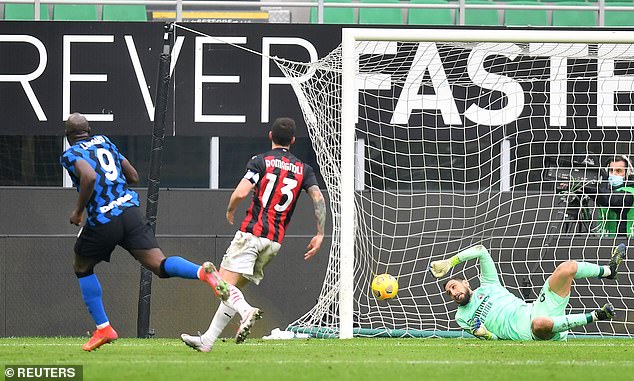 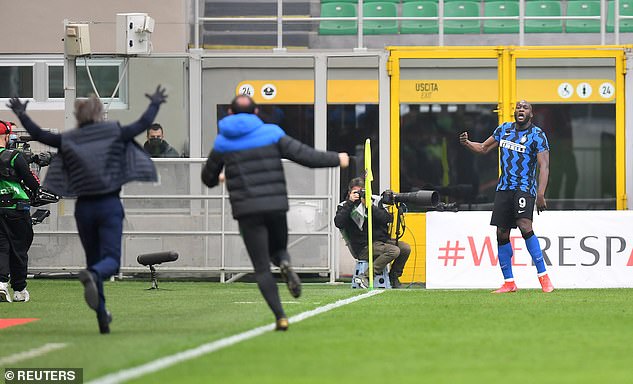 The result was put beyond doubt and both sides protected what they had. Milan took off Zlatan Ibrahimovic on 75 minutes and Martinez came off five minutes later despite being on a hat-trick. There was good reason for that – Inter suffered injury concerns through Niccolo Barella and Achraf Hakimi late on.

It hints that there are further battles to come – let’s not rule out Juventus from the running.

But it’s Inter’s title to lose, time will tell if they can hold onto top spot.

Tags: and, Lautaro, Lukaku, Mart, Romelu
You may also like
Latest Posts