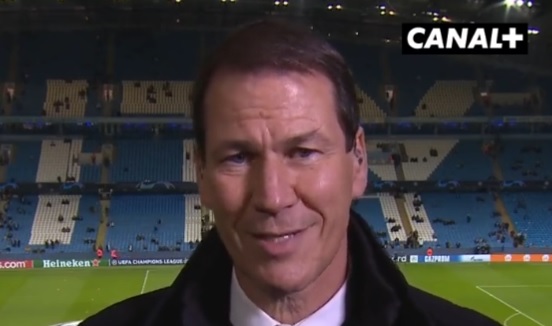 Rudi Garcia has remained tight-lipped over his future after holding talks with Manchester United over their interim job.

United are searching for a temporary replacement for Ole Gunnar Solskjaer, who was sacked on Sunday, and talks with different candidates have already begun.

Former Barcelona boss Ernesto Valverde has already been approached, but United have also had discussions with Garcia before Michael Carrick took charge of the team for the 2-0 victory over Villarreal in the Champions League on Tuesday evening.

The 57-year-old, who won the league and cup double with Lille in 2011, has been out of work since leaving Lyon at the end of last season.

When asked about his link with United, Garcia told Canal Plus: ‘I’m already there in Manchester [laughs].

‘I’m here to comment on a very good game between Manchester City and PSG.

‘In all seriousness, I don’t usually comment on rumours in my career. I won’t say anything about it.

‘Manchester United are one of the biggest clubs in the world. I neither confirm nor deny anything.’

United, meanwhile, have been dealt a blow in their pursuit of Mauricio Pochettino as Paris Saint-Germain have made it clear that they will not let the Argentine leave before the end of the campaign.

Pochettino is understood to be keen on a return to the Premier League and the prospect of managing United but PSG’s hierarchy are ready to stand firm.

Zinedine Zidane, however, has made it clear to PSG that he would be willing to take over if Pochettino did leave.