Scotland’s men’s team played their first game at a major tournament in 23 years on Monday, in case you hadn’t heard, as Steve Clarke’s side hosted the Czech Republic in Glasgow.

The Euro 2020 Group D fixture, which followed England’s 1-0 victory over Croatia at Wembley on Sunday, saw a raucous Hampden Park crowd watch on as Scotland set up in a 3-5-2 formation against the Czechs’ 4-5-1.

It is a system that Clarke has favoured, and here we look at how it functioned as Scotland lost 2-0 against the Czech Republic.

In goal was David Marshall – penalty shootout hero from the Scots’ qualification campaign – behind a back three of Liam Cooper, Grant Hanley and Jack Hendry (lining up from left to right).

Stephen O’Donnell was stationed on the right flank of the middle five, with Liverpool left-back Andy Robertson on the opposite side. In the middle was Manchester United midfielder Scott McTominay, most centrally, with Aston Villa’s John McGinn to his left and Stuart Armstrong to his right.

Up front were Lyndon Dykes and Ryan Christie – the former on the right of the strike partnership, the latter on the left.

A notable absentee from the matchday squad was Arsenal left-back Kieran Tierney. 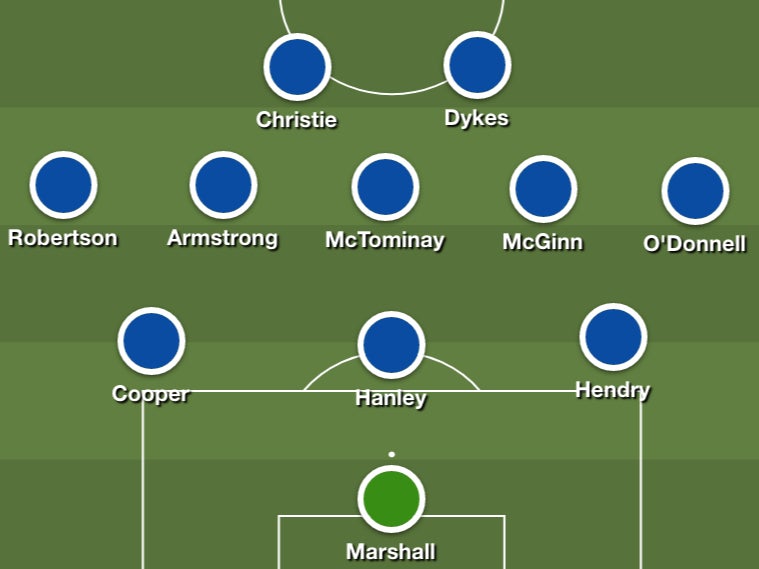 The most important element of Scotland’s system was the middle five.

Firstly, that part of Clarke’s team contains the greatest quality, with McTominay, McGinn and Armstrong forging a solid nucleus, and captain Robertson to their left undoubtedly the star man.

Those players also have the greatest impact on Scotland’s approach.

The middle five offered some protection defensively here, while allowing the hosts to swarm the Czechs when the visitors had possession – although that became more difficult as the home team tired.

They also contracted and expanded laterally depending on whether or not they had the ball; when in possession, Clarke’s side aimed to create as much width and space as possible, whereas they sought to starve the Czech Republic of both when the away team had the ball at their feet.

There were moments when the occasion and atmosphere seemed to somewhat inhibit Scottish discipline on the pitch, in a positional sense, seeing numerous players crowd the same spot when defending or rush to the ball at once without communicating.

The players adjusted a little as the game wore on, though, and that frenetic edge wore off a bit. But not enough.

It should be said, in any case, that the energy from the crowd could have aided Scotland. The atmosphere was stirring and clearly moved the players to a committed and courageous performance – though that was never really in doubt, anyway. 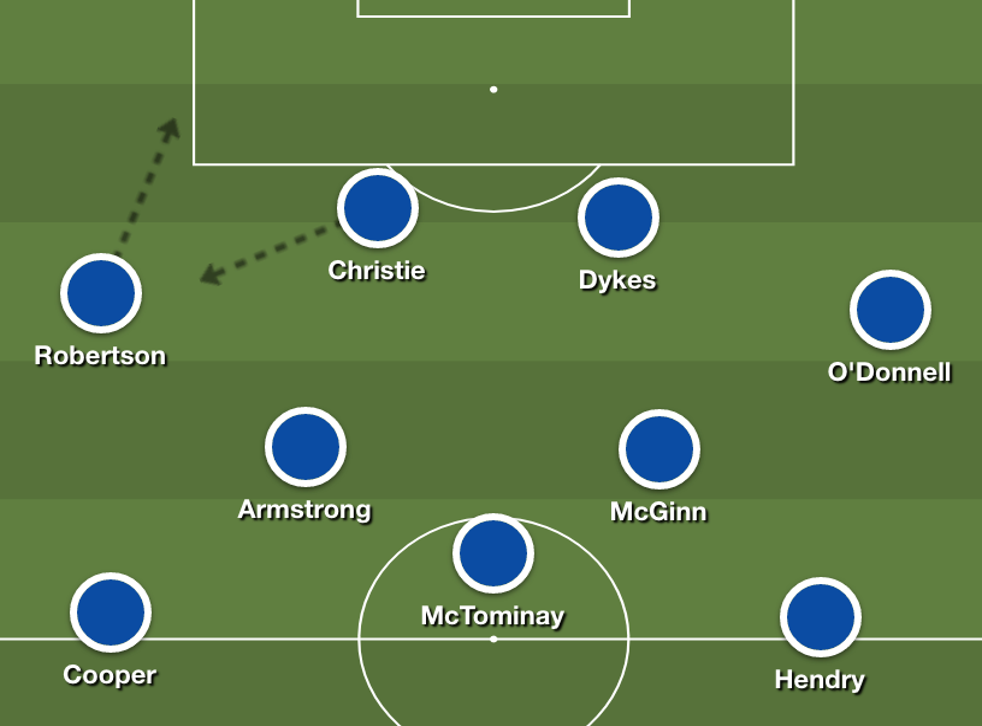 Robertson was always going to be vital for the Scots. The captain played a crucial role in trying to calm his team-mates as the game progressed – with limited success, it must be said – but his talents with the ball were equally important.

The Liverpool left wing-back combined well with Christie for a one-two in the opening 90 seconds, the striker dropping to hold up the ball before feeding Robertson on the overlap and allowing the defender an opportunity to cross – though he overhit the ball.

Robertson had a decent chance just after the half-hour mark after a similar exchange with Christie. This time, the build-up came from the right, Christie then laying the ball off to Robertson. The move ended with the Liverpool man shooting from range and seeing his effort tipped over the bar.

The Czech Republic’s first goal came from a set-piece on 42 minutes, with Patrik Schick heading home after a cross from Vladimir Darida. McGinn could have been quicker to close down Darida and deny the assist.

The second goal, in the 52nd minute, saw Schick strike again with an outrageous shot from the halfway line that sailed over a stranded Marshall and into the back of the net.

The ball arrived at the Czech striker’s feet fortuitously after Scotland centre-back Hendry’s own (ill-advised) long-range shot was blocked.

Schick hit the ball first time with Hanley nearby and Cooper desperately trying to cover on the left. While there was an element of luck before Schick’s shot, Scotland had pushed up rather high with little reservation and Marshall was too far from his goal.

At half-time, Christie went off as Che Adams came on in his place. The substitute looked a little more threatening.

Armstrong was replaced by Ryan Fraser in central midfield on 67 minutes, and at the same time, Callum McGregor came on for Hendry in central defence.

Clarke made another double change on 79 minutes, as he replaced O’Donnell with James Forrest on the right flank and took off striker Dykes for Kevin Nisbet.