Report and highlights as Scotland put their fans through the wringer but win on penalties; Scotland’s reward for the win in Belgrade is a place in Group D alongside England, Croatia and Czech Republic

Scotland qualified for their first major tournament since 1998 after David Marshall saved Aleksandar Mitrovic’s penalty in a shootout to send them to Euro 2020.

Scotland put their fans through the wringer as Steve Clarke’s men were two minutes away from a 1-0 win in normal time in the winner-take-all clash after Ryan Christie’s goal but a Luka Jovic injury-time equaliser forced extra-time.

Clarke had taken off his three most influential players – Lyndon Dykes, John McGinn and Christie – just before Serbia’s dramatic equaliser and Scotland lost their spark in extra-time but they held on to take the game to penalties.

In the shootout, all five of Scotland’s takers found the net before Mitrovic was denied by Marshall to send the Tartan Army through in dramatic fashion.

Man of the match: Ryan Christie

How Scotland did it the hard way…

Scotland have been turned upside down by Clarke’s influence in the dugout with a run of eight matches unbeaten and he stuck with the crux of the team that beat Israel on penalties in the semi-final.

Despite being the away team, Scotland enjoyed 77 per cent of possession in the opening 15 minutes with Dykes dominating the Serbian back three which gave the visitors the platform to build on.

Serbia were barely seen as an attacking force but flexed their muscles midway through the half when Mitrovic laid the ball back for Sasa Lukic who steered the ball a yard wide from the edge of the box.

Scotland started to turn possession into chances when Christie fed McGinn after another knockdown from Dykes but the in-form Aston Villa man struck his effort too close to the goalkeeper.

Clarke perhaps sensed an opportunity to take advantage of Serbia’s lacklustre showing after the break and skipper Andy Robertson spurned a glorious chance five minutes after the break after Dykes again had provided the brilliant build-up play.

But they only had to wait 90 seconds to get the goal their play deserved.

Callum McGregor snapped into an interception and fed Christie, who swivelled into space and found a cute finish into the corner from 22 yards.

Christie soon had a volley saved following a Dykes head-on and Scotland remained in control.

But the second goal did not come and minute by minute Clarke’s side slipped deeper into their own box. Headers from Sergej Milinkovic-Savic and Mitrovic failed to hit the target but Scotland did not look overly nervous as they continued to push on.

Clarke took off his three most creative players in order to see the game out, but the pressure increased and Jovic gave a sighter of what was to come by heading wide when free inside the box.

He did not waste his second chance though as heartbreak was on the menu again for Scotland.

It was one-way traffic in the extra period as Marshall was called upon to produce a brilliant fingertip save to divert Nemanja Gudelj’s long-range effort away from the top corner.

But Scotland held out for penalties and Leigh Griffiths’ first involvement from the bench to was to fire home the opening penalty before McGregor, McTominay, Oli McBurnie and Kenny McLean also netted before Marshall guessed the right way to deny Mitrovic.

The goalkeeper stopped for a second to check with the referee that he was on line before the team celebrated an achievement that is long overdue for Scottish football. 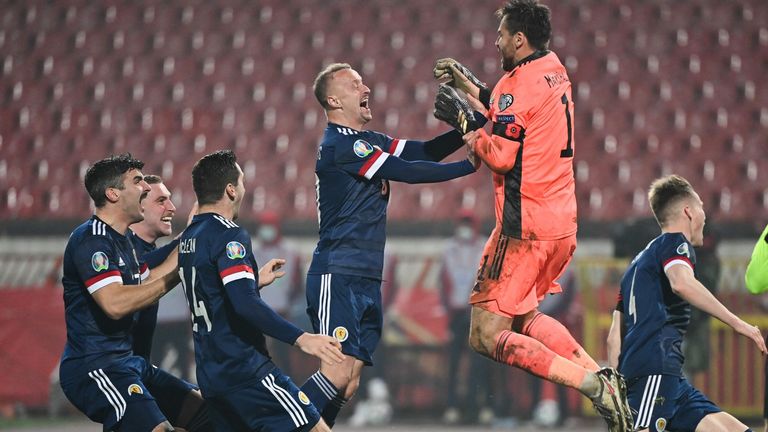 Scotland are back in Nations League action on Sunday with a trip to Slovakia before taking on Israel on Wednesday.