It says much of Sheffield United’s heightened ambition – especially in light of Manchester City’s impending European ban – that a result to keep them in sixth position in the Premier League is met with regret.

But that was the overriding emotion among another capacity and captivated crowd here at Bramall Lane, and it was a feeling shared by manager Chris Wilder, even if he did declare his pride at the performance.

Wilder’s namesake Deontay will be trading punches with Tyson Fury in Las Vegas overnight but the Blades chief was left frustrated as his side failed to land their own knockout blow, despite having the visitors on the ropes for decent periods. 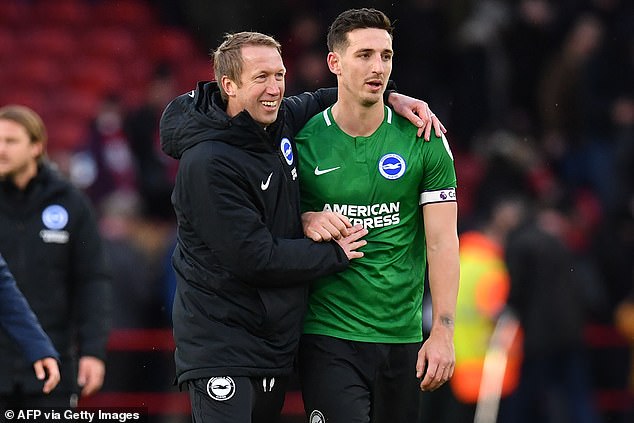 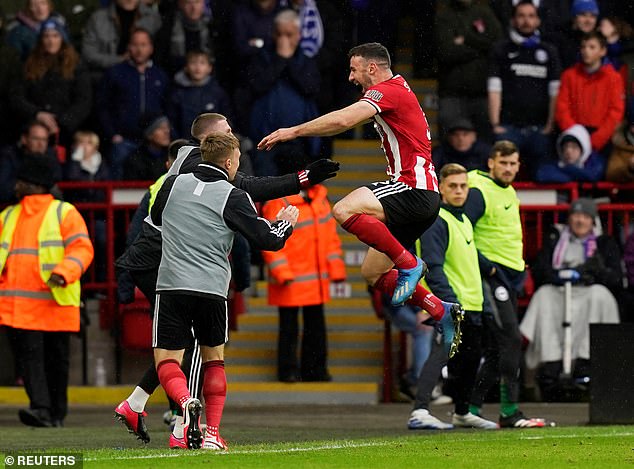 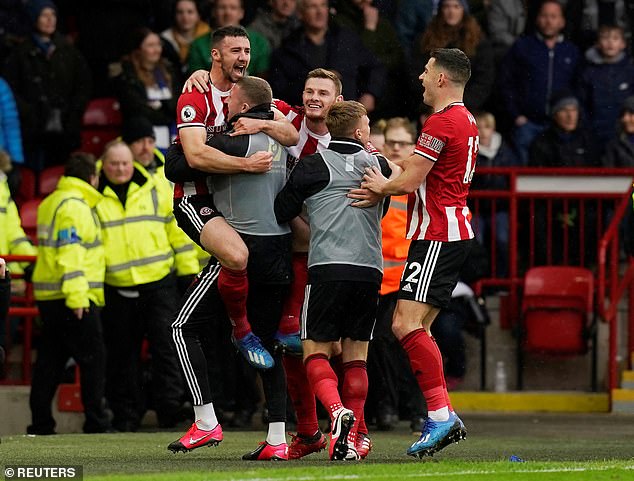 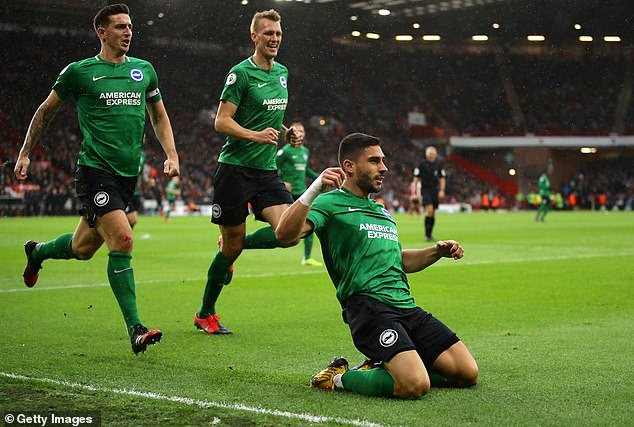 Yes, the point sees them move level with fifth-placed Spurs with Jose Mourinho’s stuttering side due here in early April, but this, you feel, was an opportunity missed.

Wilder said: ‘There is a slight tinge of disappointment but my players couldn’t have given me any more, their drive was brilliant.

‘I enjoyed watching my side play today, I really did. If anyone thinks we are a stereotypical side straight out of the Championship – smack it forward, get the first and second balls – then they are wrong. If your opinion doesn’t change after watching that then you shouldn’t be commentating on the game.

‘We have one defeat in 18 matches taking Manchester City and Liverpool out of it – we are consistent, and this was another good performance. I would have stayed behind to applaud them after that. I’m proud, it was a proper Premier League performance.’ 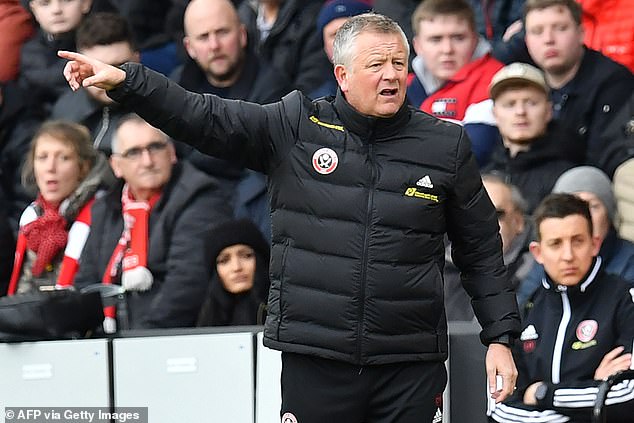 The stadium announcer quite rightly roared before kick-off that there has never been a better time to be a Blade and they took a deserved lead on 26 minutes through defender Enda Stevens.

United were smart in working a quick corner – short and allowing Ollie Norwood space to pick out a man – so Brighton would have been relieved when Dan Burn rose to head clear.

But such respite was short-lived and Stevens took one touch to control before dispatching left-footed into the top corner from 18 yards. It was a stunning execution and one that brought a collective gasp of appreciation when shown again inside the ground. 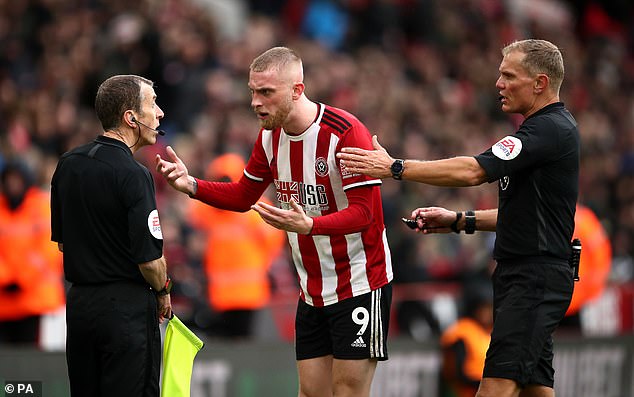 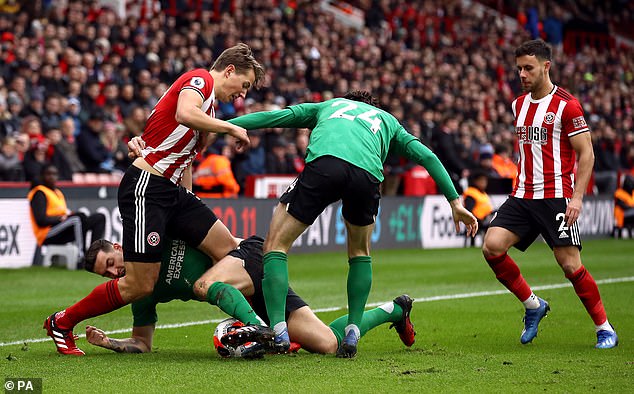 ‘If Enda had another shirt on and played for a glamorous club then they’d be looking at that goal right over the weekend, it was a fantastic finish,’ said Wilder, who then lost the Ireland left-back to a calf injury at half-time.

The Blades were up into fifth position on the back of Stevens’ blast but their elevation lasted just four minutes.

By the half-hour Albion were level when Neal Maupay broke a nine-game goal drought as he stooped to head in from Adam Webster’s knock-down, the defender having climbed to connect with Aaron Mooy’s deep free-kick.

It was a soft concession from a home perspective and Wilder’s disappointment told on the touchline. That annoyance had not eased by the time he came to reflect. 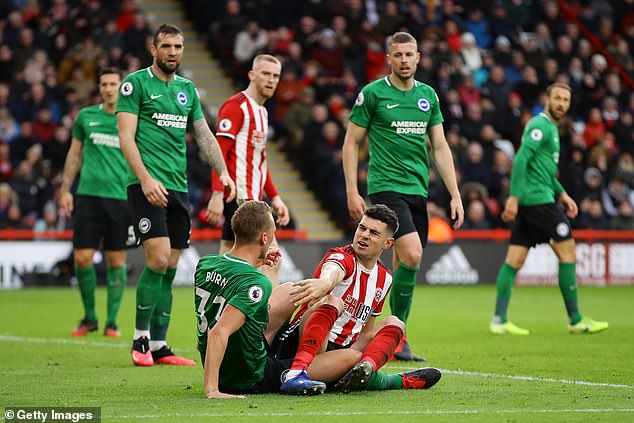 ‘We gave away a cheap goal and didn’t deal with the second ball,’ he said. ‘That leaves you open. You can’t do that when they’ve got so many six-foot-four-inch lads. And Maupay is someone we tried to get in the summer, so I’ve got plenty of admiration for him.’

Wilder was just as fraught moments after the equaliser when George Baldock, having done well to intercept and kill a promising Brighton counter, then decided to dribble across his own six-yard area. Ezequiel Schelotto slid to challenge Baldock and the defender was lucky to see the ball squirm by the post at the expense of a corner.

The hosts lost the excellent Stevens at the break but still they emerged the more threatening side.

One frenzied scramble from a corner-kick saw Brighton keeper Mat Ryan snaffle at the feet of Oli McBurnie inside the goalmouth, while John Fleck was unlucky to see an ambitious drive whistle inches by the upright having taken aim from 25 yards. 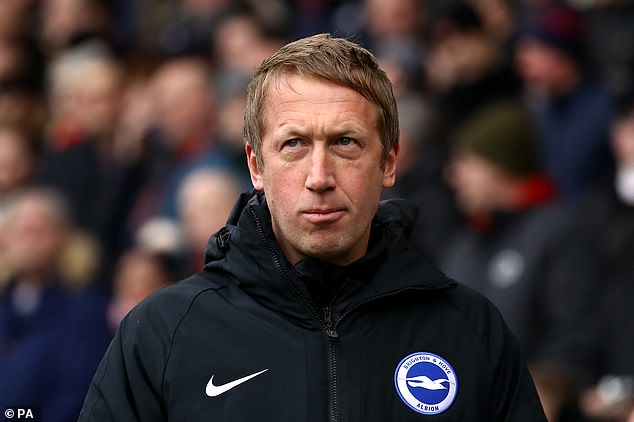 Ryan then denied McBurnie at the near post in the closing stages and Brighton resisted to take home the point that moves them four clear of danger.

‘They have an identity and clarity about how they want to play and the fact they now have 40 points already is amazing.’

Brighton were limited to just two shots on target, but Potter added: ‘We fought and we battled but we’ve played better and lost.

‘It wasn’t that we didn’t want to play, we just couldn’t, and you have to credit the opposition for that.’

Wilder, it seems, would not have been impressed had Potter suggested anything other.

Tags: 1-1, Brighton:, Sheffield, United
You may also like
Latest Posts