Doha: The Socceroos will mine their thrilling first 30 minutes against France for any shred of inspiration they can find in the hope that repeating it for longer – and against lesser players than Kylian Mbappe, Ousmane Dembele, Olivier Giroud and the like – can help them resuscitate their ailing World Cup campaign in Qatar.

Despite how it might have felt immediately after their 4-1 defeat to the reigning world champions, all is not lost. The final margin should have been a lot uglier, but it wasn’t, and so Australia can still make the round of 16 if they’re good enough.

Attention now shifts to their next clash against Tunisia on Saturday night (AEDT). Ranked No.30 in the world by FIFA, the “Eagles of Carthage” are – much like Australia – devoid of any recognisable star quality, but still had the better of a highly rated Denmark in a scoreless draw in Doha. They also have the backing of a vibrant expat community of about 30,000 people, as well as those who have travelled here for the tournament.

Graham Arnold’s men will need to not only beat them, but hope that France batters Denmark to help minimise the impact of this heavy defeat on the Group D standings – and then overcome the Danes in their final group match next week.

Both of the Socceroos’ remaining two matches will be played at the Al Janoub Stadium, where they shocked Les Bleus with an early lead in a ferocious but short-lived start that had fans daring to dream of an almighty boilover.

“It was a period of the game that we can look back on and try and grow from,” midfielder Jackson Irvine said.

“We did a lot of things really well – composure in the final third, playing forward, and defensively, solid like we were for good spells of the game. It’s disappointing for it to get away from us in the manner in which it did … individual mistakes at this level are just so ruthlessly punished. 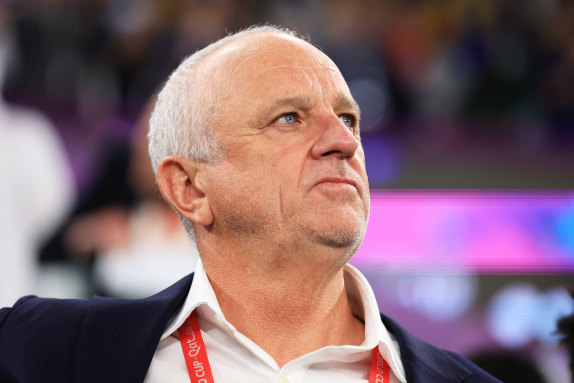 “We’re going to look at what we did well, especially in that first period of the game, but players of such immense quality and ruthlessness at this level will just punish you every time.

“It’s a tough school, a tough lesson for us to learn but it’s the right time to do it, going into two massive games now.”

Australia found themselves in a similar position at the 2010 World Cup in South Africa. Smashed 4-0 by Germany in their first match, they then drew 1-1 with Ghana and beat Serbia 2-1, but finished third in their group due to poor goal difference.

This time around, their goal difference is better by one, and if France carry their red-hot form into their next game against Denmark, who were average in attack against Tunisia, the outlook might be even brighter for the Socceroos.

They can, however, expect to be outnumbered in the stands. Tunisia’s fans helped contribute to their domineering performance against the Danes, whistling through their national anthem, jeering them in possession, and loudly applauding the desperate defensive actions that helped them hold the world No.10 side to that 0-0 stalemate – one of the best results in their World Cup history, given the calibre of their opponents.

Defender Kye Rowles, who admitted he was “packing it” with nerves against France, watched part of the Denmark-Tunisia match on TV before playing later that night.

“It seemed pretty good. That’s what you want at these games,” he said. “Tonight was a very good atmosphere – our fans brought it and so did the French. It was a great game to play in, it was always noisy. They didn’t stop singing. They’re always behind us. I think the next game will be just as loud, if not louder. It should be pretty fun.”

The Socceroos came out of the match physically unscathed, with striker Mitch Duke confirming he was fine despite copping a knock to his hip in the first half. Facing a short a three-day turnaround, Arnold has already flagged the possibility of personnel changes, and was flirting with a switch to a back three against France before opting to stick with his tried-and-tested formula of four players in defence.

“When we get back to the hotel, that’s the game gone,” Arnold said. “It’s good that the other result was a draw. Now it’s about winning [against Tunisia], so we’ve got to get ready for it.”

Meanwhile, Craig Goodwin said his elation at scoring Australia’s goal – their first from open play at the World Cup in over eight years – had been tempered by the final outcome.

“Putting on the Australian jersey is an honourable moment at any time, but to be at the World Cup, to play against the reigning champions and to score and take the lead was an incredible moment. The emotions were flowing through me,” he said.

“It was something that I’ll cherish for the rest of my life – but I’ll do that after the tournament, because we’ve got a game in three days time, and it’s something that we believe that we can win. We take the positives out and we look forward to the Tunisia game in a few days time.

“We have to go in with full confidence – the group is wide open, and we have the belief in this group that we can do something special.”