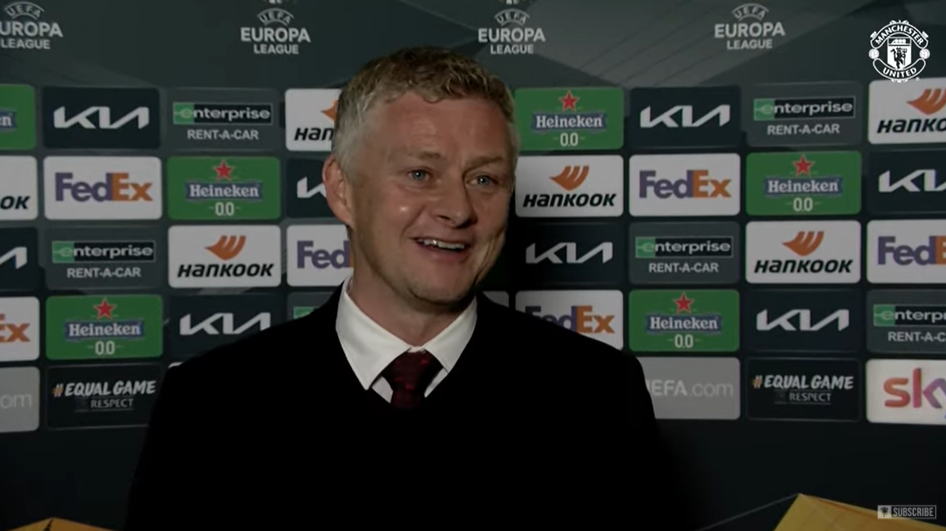 The Red Devils suffered a 3-2 defeat in Italy on Thursday night but still comfortably progressed to the final of the competition after winning the first leg 6-2.

Cavani, who joined the club on a free transfer last summer, produced an impressive performance in the second leg, scoring twice to ensure Manchester United will feature in the final on May 26 against Villarreal, who knocked out Arsenal.

‘It feels good to be in the final,’ Solskjaer told MUTV.

‘We played one very, very good half at Old Trafford which has taken us through. I’m disappointed we lost tonight – especially the way we played in the second half.

‘It could easily have been 8-6 to them. It was a strange game.

‘We kept giving them the ball but luckily we have one of the best keepers in the world and a centre forward who is 34 but he can score goals.

‘His movement, his finishing, absolutely top. Edi and David, two top performances from them. We are in the final and are looking forward to 26 May.’

Red Devils captain Harry Maguire, meanwhile, added: ‘It’s a great achievement to get to the final. We didn’t win the game and that’s disappointing but we did the hard work in the first leg.

Roma will be glad to see the back of Edinson Cavani ð pic.twitter.com/lRVZgK36LG

‘We started the game a bit edgy. It was end to end like basketball and we gave them too many chances in second half.

‘Now we’ve got to go to the final and win it. Edinson scored two great goals and his movement and work rate without the ball is excellent.

‘His second goal is typical of him and what he has done throughout his career.’