Doha: If you’re reading this via social media, you should stop now. It might contain traces of praise and adulation for the Socceroos. If so, coach Graham Arnold thinks you’re conspiring in their self-sabotage in the 2022 World Cup.

Not a media briefing goes by in which he doesn’t raise it unasked. Shite, he called it one day. His media minders tried to tone it down, but he was adamant. For tournament players, social media was poly unsaturated shite. 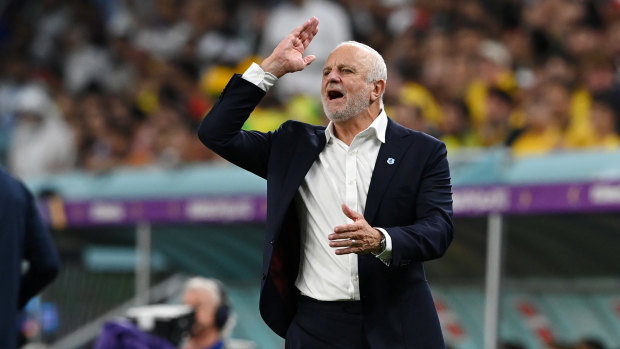 He’s seen it all before. They’re up all night reading about how good they are. Their eyes glaze over. Their brains turn to jelly. So do their legs. Idolatory turns their heads. Denunciation does their heads in. But they keep reading and they never go to sleep.

They can’t help themselves. But you can. By being here, you’re encouraging them. You need to log off now.

“Avuncular Arnie’s not entirely a killjoy. He enjoys a degree of the flattery that comes his way. He loves the videos he is sent of wild celebrations at Fed Square and in his local pub.”

Personally, Arnold is glad he played in a time even before mobile phones, in blissful isolation. To this day, he doesn’t read anything about himself or his team. 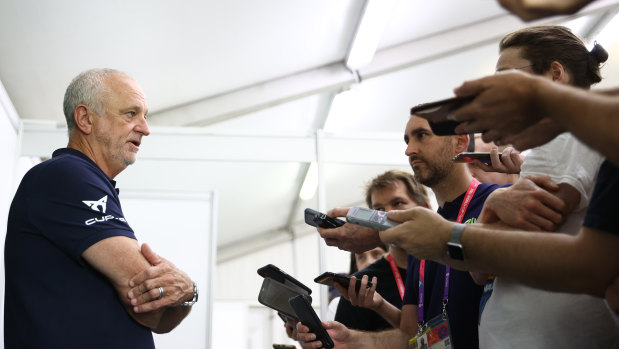 Graham Arnold speaks to the media.Credit:Getty

Apart from a couple of hours on match day, they can’t even hear the World Cup, let alone see it. Their only connection to the world is an HTML cable. Their window on it is Twitter, Insta, Tik Tok and Snapchat. It’s always open.

It was ever thus. The 2014 World Cup was in Brazil, soccer nirvana, but only dimly in the consciousness of the Socceroos. “We don’t get to see what everyone else gets to see,” said Tim Cahill then. “We don’t need to see it. We’ll see it after that tournament.”

Instead, they exercised and played pool and table tennis and FIFA14. Today, it’s FIFA23. As they play in #FIFAWorldCup2022, they play at it. 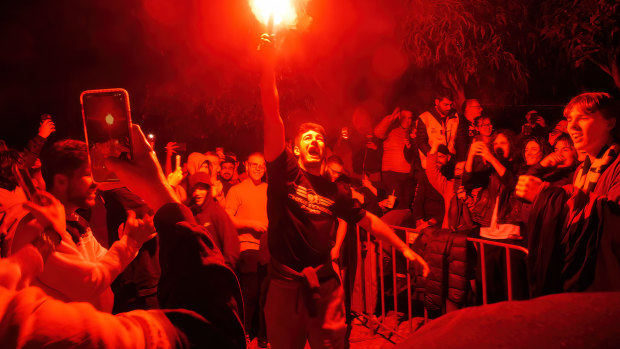 But the devil makes work for idle hands, For soccer players, that’s all of them except goalkeepers. So for our heroic, that is, quite-good-on-their-day Socceroos, there’s always social media. Always and all hours.

Avuncular Arnie’s not entirely a killjoy. He enjoys a degree of the flattery that comes his way. He loves the videos he is sent of wild celebrations at Fed Square and in his local pub. He understands that is good for the wellbeing of Australian soccer for the players to see and enjoy the world watching and enjoying them. They won’t see it outside their cloistered windows.

“We’re in a fantastic facility where we don’t get out and see the public,” Arnold said. “Just to see those videos and see those reactions is massive for us, because it just shows the boys how much support they’ve got back at home. You can, if you don’t see it, be wondering, what’s it like back at home.” 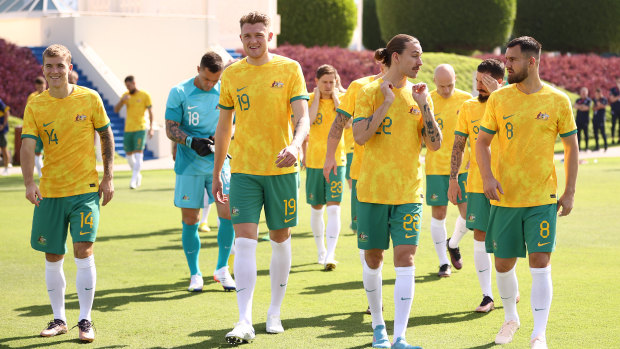 The Socceroos train at their base in Qatar.Credit:Getty

But there’s no off-switch, no moderator, no monitor. Arnold styles this Socceroos squad a family, and he makes a great father figure, loving but curmudgeonly.

“I hate saying this, but they’re on social media til 4 or 5 in the morning, reading all these comments and pats on the back,” he said, unbidden, minutes after the Socceroos had beaten Denmark, the greatest win in their history.

“I’ve been in the game and been around long enough to know that the most important thing is recovery, sleep, and making sure you do everything to get yourself ready for the next game.”

That is, get off the bloody screen, turn the light off, you’ve got school in the morning. There’s not a family anywhere who won’t recognise this. There’s barely an individual. 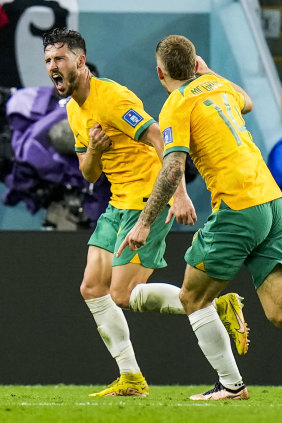 Mathew Leckie was the hero against Denmark.Credit:AP

Fleet Street was onto him. Materialising instantly in front of him after the Denmark game was a reporter from The Sun. Was he going to confiscate their mobile phones. No, he wasn’t. Nor was he going to ban social media. Other than in North Korea, it’s un-ban-able.

By Thursday, though, Arnold must have known he was fighting a losing battle. While he was sounding the social media alarm, Football Australia was announcing a new partnership with Tik Tok.

“Our national football teams resonate deeply with all communities and our playing group have a strong following both at home and abroad,” said a Football Australia spokesman. “These TikTok accounts present the opportunity for fans to engage with both teams in a different and unique way, using the power and popularity of short-form mobile video.”

So social media is still shite, but now it’s our shite? With a blue tick. It has friended us. For Australia now, the end of the world can only be a matter of time. Tick, tock, tick, tock. 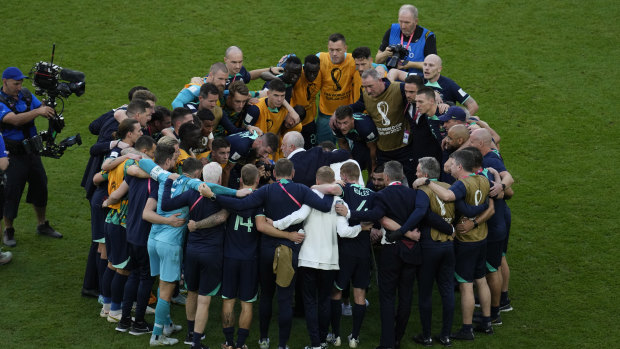 A group hug for the Socceroos after their win against Tunisia.Credit:AP

So it’s down to you, social media savvy Socceroos fan, to stop the downfall. You’ve got better things to do. They haven’t. But if you’re not there, there’s nothing to see, because that’s the way social media works. They can only be as distracted as the distractions you provide.

OK, so they haven’t fallen yet. Still, you can’t trust them to do anything except win World Cup games and generally be moderately heroic. But you’re tempting them, and that’s tempting fate. Best you stop now. I am, right here.