A flash of brilliance from Neto settled a lively contest as Saints were consigned to a record sixth straight Premier League defeat.

Danny Ings had put the hosts in front with a brilliant volley (25) but the game turned on a moment of controversy as Ryan Bertrand was deemed to have handled Nelson Semedo’s shot inside the box.

Ruben Neves converted from the spot to give Wolves a lifeline (53) before Neto’s individual strike from an acute angle completed the turnaround (66).

The result moves Wolves above Southampton into 12th place with Ralph Hasenhuttl’s side replacing them in 13th with 29 points from 23 games. 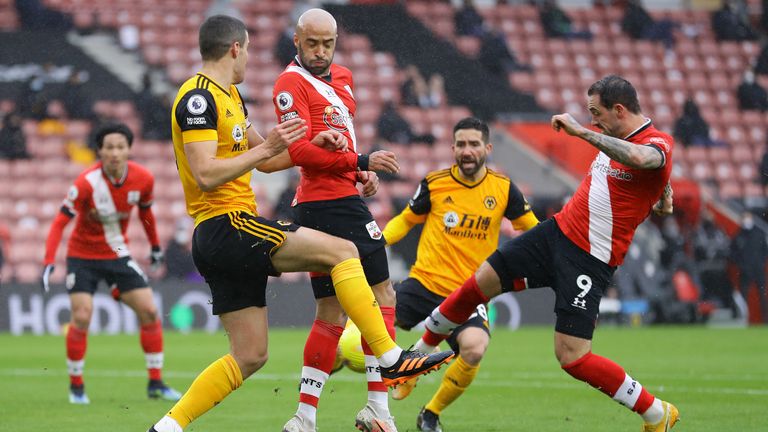 Man of the match: Pedro Neto.

Both sides have suffered an alarming dip in form during the winter with just two wins from the previous 20 Premier League games between them, but Southampton brought with them the confidence garnered from their 2-0 win at Molineux in the FA Cup on Thursday.

Neto and Adama Traore were well nullified on the flanks and the hosts duly took the lead in stunning fashion on 25 minutes.

The move began with James Ward-Prowse and Takumi Minamino combining in midfield before Stuart Armstrong’s dribble and cross was sent searing into the net on the volley by Ings.

It brought the increasingly familiar furrowed brow from Nuno Espirito Santo; Nelson Semedo had allowed Armstrong to cross too cheaply, but there was a cute block from Nathan Redmond on Conor Coady to allow Ings to volley into the top corner. 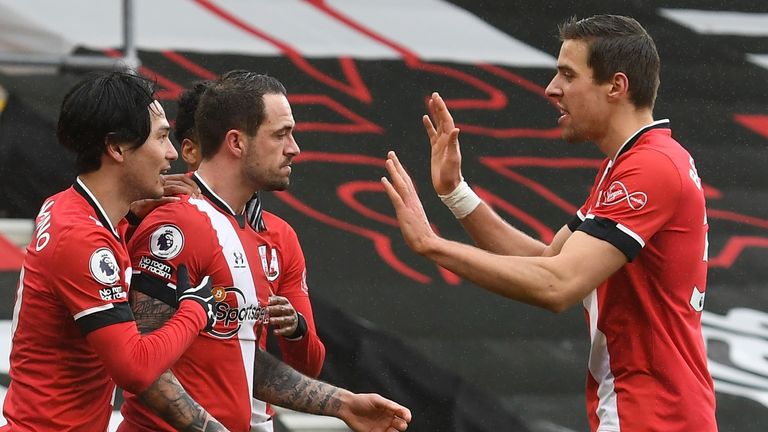 Nuno’s Wolves were toothless in the opening half compared to their confident and bright opponents. The visitors lacked a threat and had just four touches in the Saints penalty area to go with no shots on target.

The only consolation was that Southampton weren’t further ahead with Minamino having already seen his shot well saved low down by Rui Patricio from Redmond’s pass prior to Ings’ breakthrough.

Takumi Minamino came back in for a Southampton side showing three changes for Sunday’s Premier League clash with Wolves. Saints were bidding for two wins over the Molineux men in four days, following Thursday’s 2-0 FA Cup win in the Midlands. 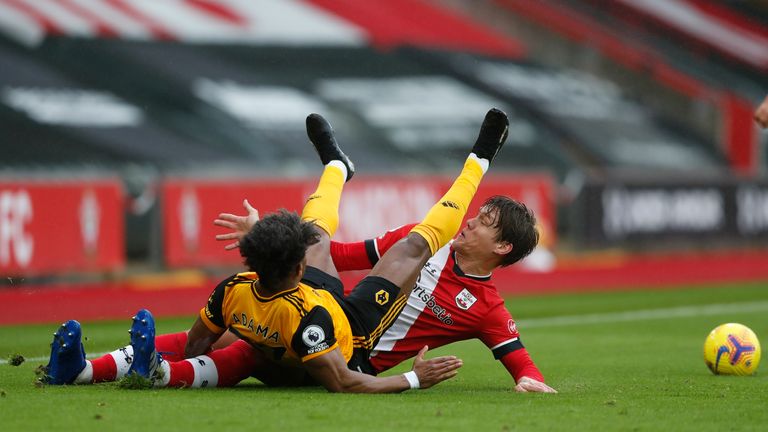 There appeared little else on for Semedo when he took aim from distance, with his shot catching the trailing arm of Bertrand. Referee Graham Scott immediately awarded the penalty with VAR Martin Atkinson sticking to the original decision upon VAR review.

It was Hasenhuttl’s turn to sport a scowl as Neves made no mistake from the spot, sending Alex McCarthy the wrong way. Saints were still smarting when 13 minutes later they found themselves trailing.

This time, Neves was the provider as he sent the ball into Neto’s direction, who drifted with ease away from Jannik Vestergaard and from the tightest of angles, the Portuguese lifted his left-foot shot beyond McCarthy. 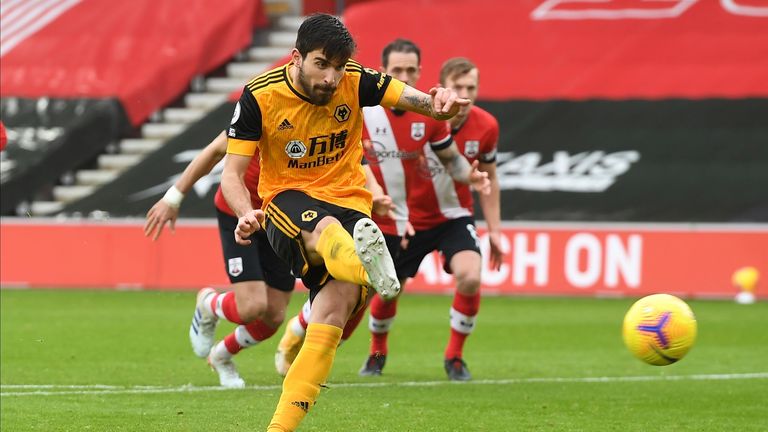 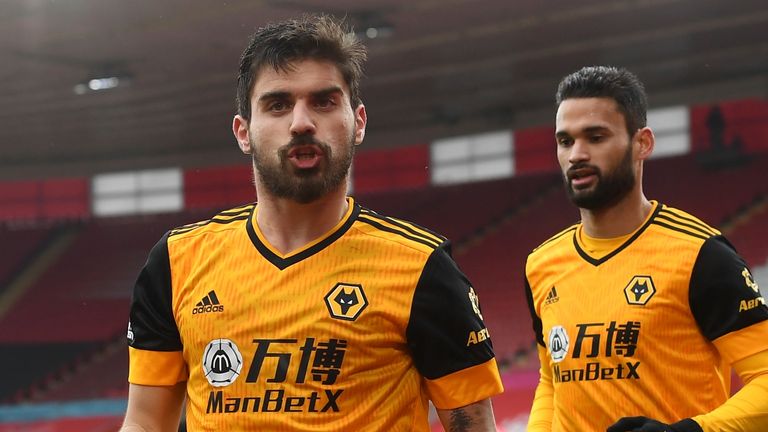 Southampton rallied and Hasenhuttl thought his side ought to have ben awarded a penalty of their own when Armstrong’s cross appeared to strike the elbow of Leander Dendoncker at the far post.

James Ward-Prowse’s long-range strike was then well kept out by Patricio with the rebound saved once more from Che Adams – albeit the offside flag would then have come to Wolves’ rescue.

Adams would get his chance as Redmond scurried away down the right, but the Saints striker sent his header well wide. It was the closest Southampton would come to an equaliser as Neto’s strike proved a worthy winner.

What the managers said

Southampton boss Ralph Hasenhuttl: “I think we shouldn’t discuss our negative run. It’s hard to understand and explain and take this defeat. Until the penalty, they had no goal chance at all and we were the dominant team.

“I don’t want to speak about rules, but when you talk about hands being away from the body, I don’t understand how we weren’t given a penalty too. It’s a little bit too much to take in the last couple of weeks. Why didn’t we get a penalty as the arm was clearly away from the body [for Leander Dendoncker]. It was on the elbow. I don’t know, it’s handball, no? You tell me.

“I don’t want to discuss about anything else. The guys worked hard.” 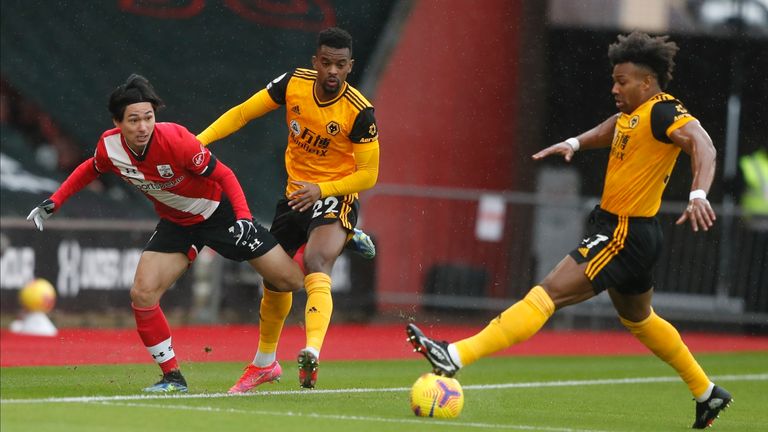 Wolves boss Nuno Espirito Santo: “I’m pleased with the reaction as we moved the momentum of the game onto our side. We told them at half-time just to try to find better solutions as Southampton had started well and had been more aggressive. The game changed on the small details and due to the actions of our offensive players. They players did well.

“It was a very tough game. In the first half I thought Southampton organised better but then we were on the front foot in the second period, scored two goals and defended really well. I’m thinking about us [for the penalty]. It was a good move and after it was the decision of the referee. I haven’t seen the images yet but there are people in a better position than me to judge that.

“I don’t agree that we were disappointing. Southampton are a tough team and they were better in that moment. But the game changed. I thought Pedro – in fact both of the wingers – did well once they changed sides with more actions. Their games are based on one-v-one situations. His goal was a huge moment for us. They’re very talented and the standards are high. We expect the best from them.”

Man of the match – Pedro Neto 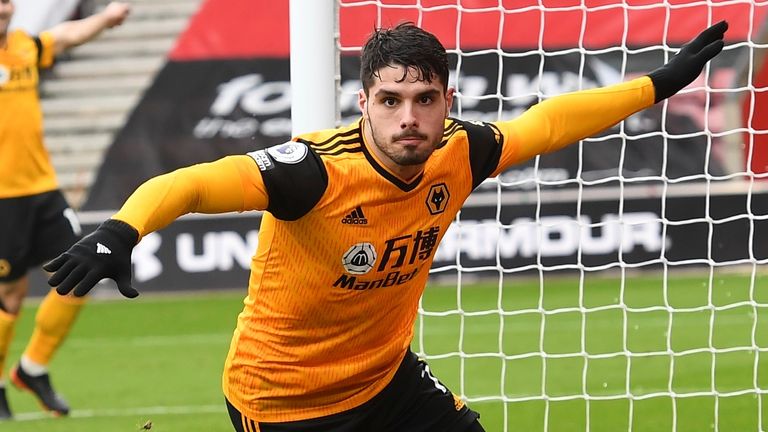 Bertrand’s handball will certainly grab headlines, but Neto was integral to Wolves’ transformation in the second half with his three key passes more than any other player.

The 20-year-old was well marked in the opening period but Nuno Espirito Santo swapped his wingers at the break. Southampton had no answer.

Neto told Amazon Prime: “In this game last season we were 2-0 down and here again it was a really poor first-half from us. We gave a good response and we played like we always want to play. We worked harder than them and managed to score twice so we’re very happy.

“We changed the way we played. I moved to the right side and Adama went to the left. We need to start winning the duels, which we did.”

Neto has been directly involved in nine Premier League goals this season (five goals and four assists), the most of any player in the competition this campaign aged under 21. 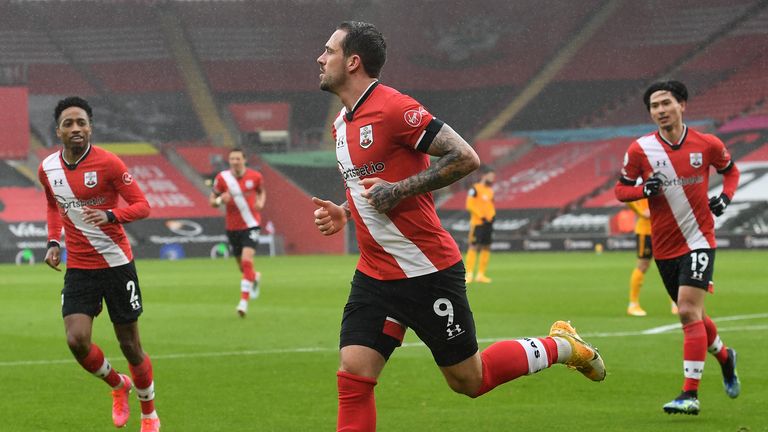 Tags: 1-2, Brilli, Southampton, Wolves
You may also like
Latest Posts