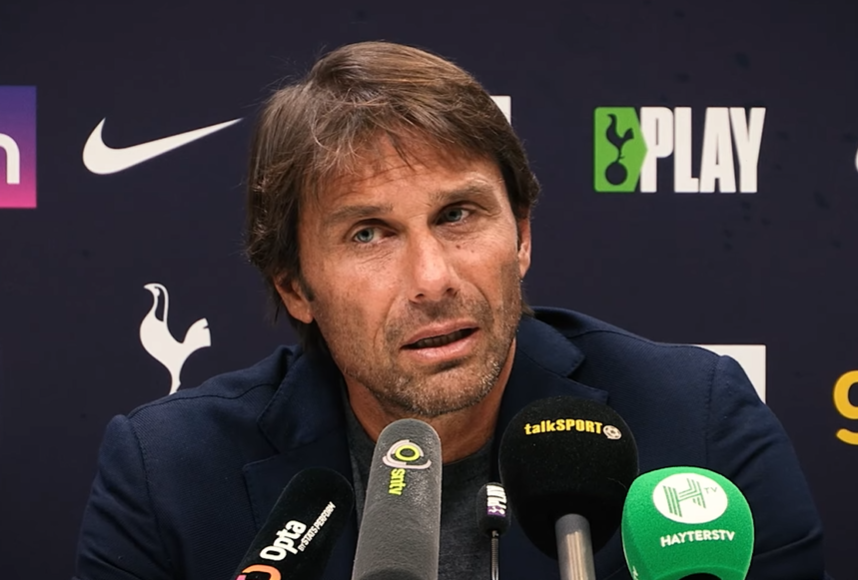 Antonio Conte believes Tottenham face a massive test in Saturday’s north London derby and has praised Arsenal’s start to the new Premier League season – as well as their new signings.

Unbeaten Spurs sit in third place in the table, one point behind leaders Arsenal, and travel to the Emirates in the weekend’s early kick-off looking to become the first team since Brighton in early April to take points off the Gunners at home.

Mikel Arteta strengthened his squad significantly over the summer – bringing in the likes of Gabriel Jesus and Oleksandr Zinchenko – and Conte is in no doubt about the quality of the side he is coming up against.

Asked if it is important to try to leapfrog Arsenal to top spot in the table, Conte said at his pre-match press conference on Thursday: ‘You know very well that this is the eighth game we are going to play, we have just started this league.

‘For sure, Arsenal have had a fantastic start. They lost only one game against Manchester United. They are showing to be a really good team.

‘I think in the summer they made good signings for them and improved a team that, don’t forget, they were four points up on us with three games left last season.

‘It means that we are talking about a really good team, and last season we did a really good job to overcome them in the last three games.

‘But at the same time I know the quality of this team. I know they are working with Mikel Arteta for many years. They are really well organised.

‘I said last season, Arteta for me is a really good coach. He’s young but he can have in front of him a great career.

‘We know that Arsenal are one of the six teams that try to take the best position in the Premier League.’

Conte also revealed that he had watched some of Arsenal’s All or Nothing documentary on Amazon though has yet to finish the series – and he burst out laughing when it was suggested he would like the ending.

‘To be honest I didn’t finish watching it but for sure in the future I will finish this documentary,’ he said. ‘I did the same with Tottenham, Manchester City and Juventus because I’m really curious to understand the way to manage the situation for the coach.