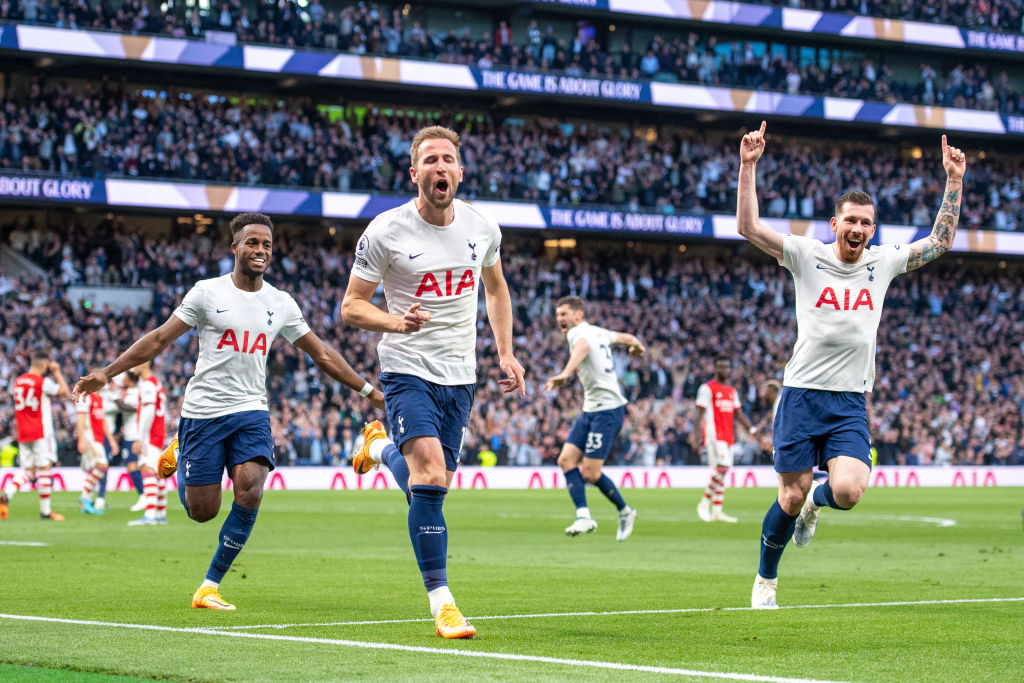 Tottenham Hotspur enjoyed a dream north London derby in the Premier League on Thursday night as they hammered Arsenal 3-0 and kept their top four hopes alive.

It was a disaster of an evening for the Gunners at the home of their fierce rivals, as they were not only well beaten but saw Rob Holding sent off in the first half and Gabriel limp off injured in the second.

Harry Kane got two of the three goals – a penalty and a scrambled effort from a corner in the first half – while Son Heung-Min scored less than two minutes after half time to end the game as a contest.

Mikel Arteta’s side remain in control of the race for fourth place, holding onto it, one point and one place ahead of Spurs.

However, with two games to play, things will be very tense for them in their trip to Newcastle and when they welcome Everton to the Emirates.

Spurs are still to host Burnley and go to Norwich, aiming for six points and hoping the Gunners slip up.

It was a frantic start to the game with tempers flaring early on and it seemed that cards were to be shown over the contest.

It was a foul that brought about the first goal as Cedric Soares nudged Son in the back as a cross was swung into the penalty box.

While some would label it a ‘soft’ penalty, it looked like a clear foul and it allowed Kane to comfortably slot home the spot-kick on 22 minutes.

Kane broke into the box but was eventually halted by Gabriel, only for the ball to bobble to Son who powered a finish past Aaron Ramsdale.

3-0 to Spurs… game over for Arsenal?! pic.twitter.com/En6JQa89Uc

Spurs continued to dominate the rest of the second half with little offensive work to note from the visitors, except a sharp chance for Martin Odegaard with 10 minutes to play which was hit straight at Hugo Lloris.

The injury added to insult for Arsenal was Gabriel limping out of the contest holding his hamstring, which looks set to be another blow for Arteta ahead of the final two games of the season.

The game had long since been over when referee Paul Tierney blew the final whistle, but the race for the top four is now very much alive.