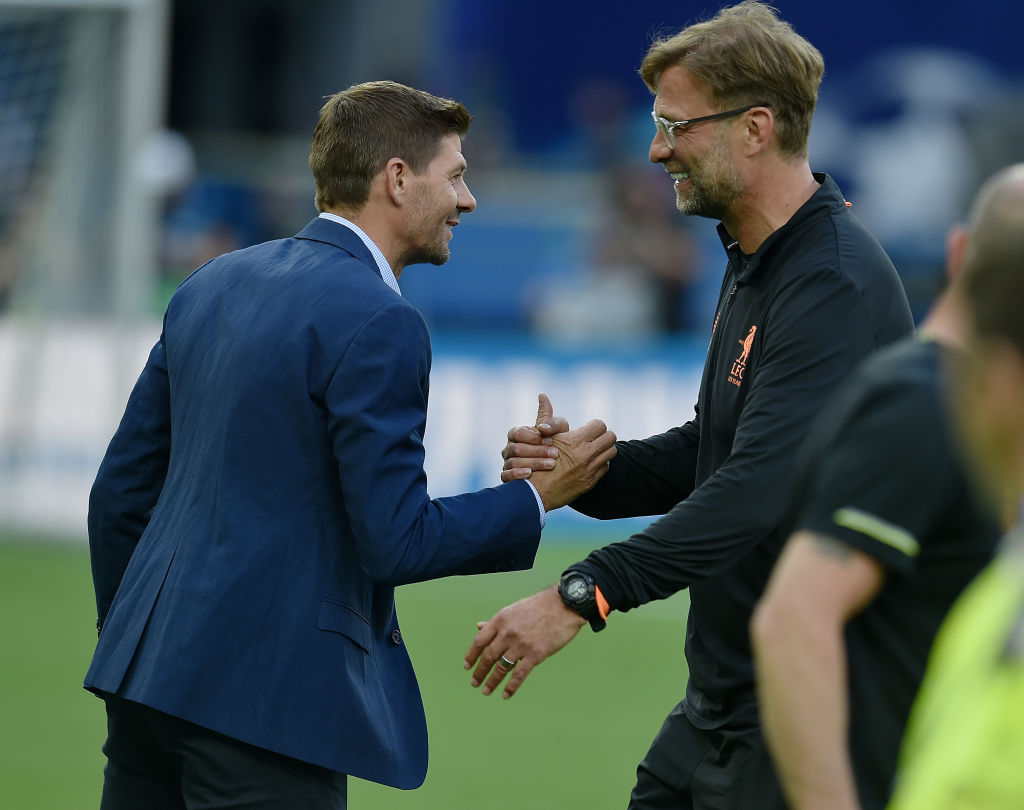 Steven Gerrard says he has already been promised a ‘big hug’ from Jurgen Klopp when he takes his Aston Villa side to Liverpool in December.

Gerrard has taken over as the new Villa manager and is preparing for his first game in charge in the Premier League at home against Brighton on Saturday afternoon.

Undoubtedly one of the game Gerrard will have checked the date of when he took the Villa job was Liverpool away, as he prepares for an emotional return to Anfield to take on the club at which he is a legend.

That fixture comes around on 11 December and Klopp is well aware of it too, as Gerrard revealed what the German had said to him after hearing of his new role in the Premier League.

‘I’ve been in touch with Klopp, I bump into him when he walks his dogs,’ Gerrard said at a press conference on Thursday.

‘He sent me a message saying he is “looking forward to a big hug on the side” when Villa play Liverpool next month.’

Gerrard’s success at Rangers has led him to the Aston Villa job and many expect him to eventually succeed Klopp as Reds boss when the German’s current contract expires in 2024.

The Villains have been spoken of as a stepping stone for Gerrard to reach his dream job back at Anfield, but he has, unsurprisingly, denied that and says he would be happy to see Klopp stay on at Liverpool long into the future.

‘Very unfair,’ he said of the stepping stone suggestions. ‘You’ll never hear me say it’s a stepping stone. I’m honoured and proud to be in this position. I will be 100 per cent committed and more.

‘There is nothing wrong with dreams and aspirations, but they [Liverpool] have a world class coach right now and if he signed a deal for life right now I’d be very happy.’

Villa take on Brighton at 3pm on Saturday in Gerrard’s first game in charge, while Klopp also has a big game in prospect against Arsenal at Anfield at 5.30pm.