Tammy Abraham was not happy when Cesar Azpilicueta told him to leave Jorginho to his penalty duties in a 4-0 win over Crystal Palace. The Italy international had already netted from the spot when he and the English striker had an awkward on-pitch encounter when Mamadou Sakho fouled Kai Havertz in the box.

Azpilicueta had to pull Abraham away from Jorginho after the midfielder took the ball from him to take a penalty.

Chelsea were 3-0 up at the time with just minutes to go when Havertz was taken down in the box by Sakho to give the Blues their second penalty of the afternoon.

With Abraham desperate to add to his goal tally, he was keen on taking the spot-kick.

But Jorginho is Chelsea’s designated penalty taker and the two became embroiled in a difficult moment with some words thrown between the two. 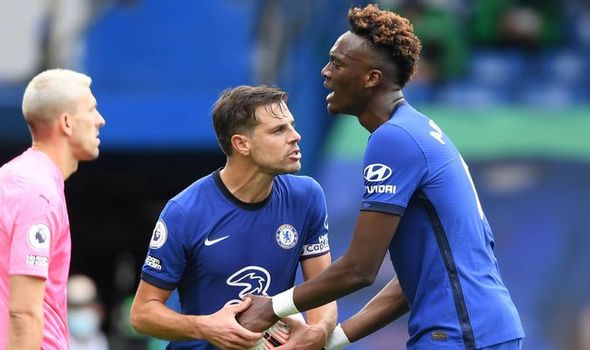 And club captain Azpilicueta was straight into the thick of the matter, pulling Abraham away as the England international moaned and sulked.

It did not seem to trouble Jorginho, who scored in the exact same place he put the first after his trademark hop and skip routine.

And at full-time, all that mattered was the result after a resounding 4-0 win for Frank Lampard’s men after a tricky week.

Chelsea had been knocked out of the Carabao Cup to put the Blues boss under some pressure following a penalty shootout loss to Tottenham.

Drawing 3-3 with West Brom saw concerns over ther defence after three goals conceded in 30 minutes against the Baggies.

But there were no concerns after today as the Blues go into the international break three points better off.

Ben Chilwell was the instigator, getting a goal and an assist on his Premier League debut to kick off the thumping. 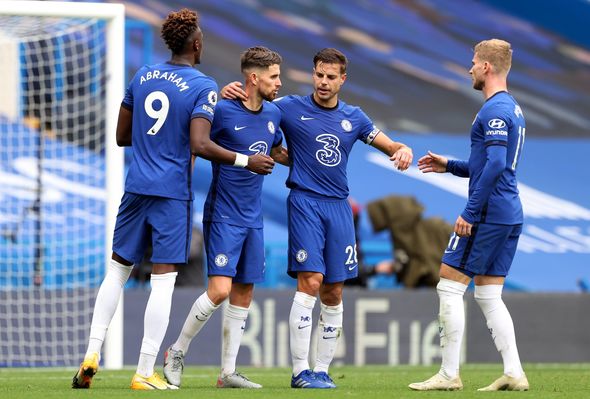 Kurt Zouma was the benficiary of the full-back’s crossing, placing a fine header past Vicente Guiata with nearly 20 minutes to go.

With Palace’s frustrations growing, lazy challenges by Tyrick Mitchell and Sakho allowed Jorginho to score from the spot.

After the match, Lampard insisted that there were no problems.

When asked about the situation, he said: “It has been dealt with. On the pitch and in the dressing room. I don’t mind Abraham having a go but that’s why we have leaders.”