Caitlin Foord has given a ringing endorsement of Tony Gustavsson's appointment as the new Matildas coach and believes his infectious personality and experience in "pressure moments" will help the national team's realise their glittering potential.

Foord conducted her own due diligence through friends and ex-teammates who had played for the US women's national team during the Swede's successful reign as Jill Ellis' assistant – and the feedback was overwhelmingly positive. 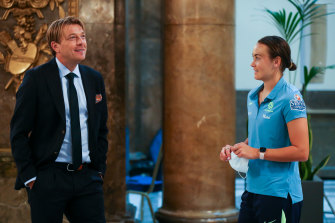 It didn't take long for the 25-year-old Arsenal striker to understand exactly what they meant after meeting Gustavsson last week at his unveiling at the Australian embassy in London.

"I just got a positive, exciting vibe from him, which I feel like fits in perfect with our team," Foord said.

"It's just exciting to have someone who's genuinely passionate about the job and can see what we can see within our team, and what we can do and achieve.

"He said [to me], 'I'm so glad the team feels like that because that's how it should feel – you guys have always had all the tools to be able to beat the best nations.'

"It's just putting all those tools together, which he thought we'd lacked in the past. To have someone who's seen that and to hear first-hand that teams like that fear us, that's exciting." 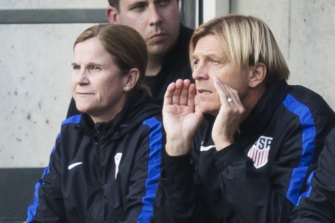 Tony Gustavsson in the dugout with USA coach Jill Ellis.Credit:Getty

Gustavsson, 47, spent two stints as an assistant coach with the US team – first under compatriot Pia Sundhage, who steered them to Olympic gold in 2012, then with Ellis, who guided them to wins at the 2015 and 2019 Women's World Cups.

Ellis was Football Federation Australia's initial target for the job but sources close to the recruitment process indicate she gave warm support to Gustavsson's candidacy, while Foord said the American players she had spoken to had only good things to say.

"One of the things that all of them said was they learned a lot from him – he's very intelligent in what he does, he was almost like the brains behind their success," Foord said.

FFA also sought feedback from Matildas players on the qualities they thought their next coach needed to possess – and while Foord was not directly involved in those talks, which went through the team's leadership group, she said it was clear from what had been relayed to the rest of the squad that Gustavsson ticked all the necessary boxes.

One of their main requests was for a coach who had enjoyed success at a high level. As the Matildas embark on a four-year stint under Gustavsson that will take in four major tournaments – including a World Cup on home soil in 2023 – Foord is hopeful his expertise can turn them into contenders at each one.

"We have the team and the squad to be able to do it. And we do have the belief, but it's [about] when we get deep into a tournament to keep believing," she said.

"It's in those pressure moments when you have to perform or if something's not going right, it's having a leader to look to that can think quick, on the spot, what needs to change and find solutions. From what I've heard he's definitely the guy for that.

"We look, after these tournaments, for the answers and it's so hard to know what went wrong or where we could have gone better. Maybe with Tony coming in he may have the solutions because he's been there before and he's done it.

"That's what all of us have been looking for. It wasn't like we were saying we want this person in particular, we just wanted the best person for the job and we feel like the federation has done that with Tony."

Gustavsson won't officially begin his new role until next year when he finishes his commitments with Swedish club Hammarby but is expected to oversee a Matildas training camp next month in England.

Tags: best, for, job, person, THE
You may also like
Latest Posts