The Porto playmaker being tracked by Arsenal, the Germany star who ditched England and the Wolves midfielder turning heads for Portugal… the wonderkids to watch in tonight’s U21 Euros final

Euro 2020 is just around the corner but before we feast our eyes on the biggest talents in European football, it’s time to see what the next generation has to offer in the U21 final this Sunday.

Germany and Portugal will play out the showpiece in Ljubljana, Slovenia, and both sides boast a wealth of young starlets eager to show their quality with the eyes of the world watching.

This final has previously seen some of the top stars in the game announce themselves onto the biggest stage, with Mesut Ozil and Manuel Neuer starring in Germany’s 4-0 thrashing of England back in 2009.

Now these two nations with a history of churning out top players will have a chance to show what the future may hold as they bid to claim the European Championship crown. Sportsmail has taken a look at the names you should be looking out for ahead of the final on Sunday. 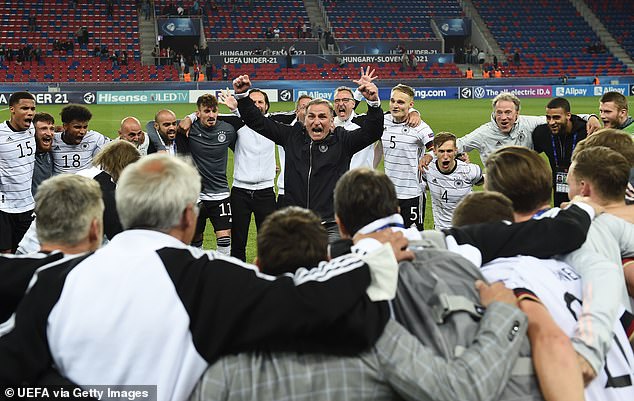 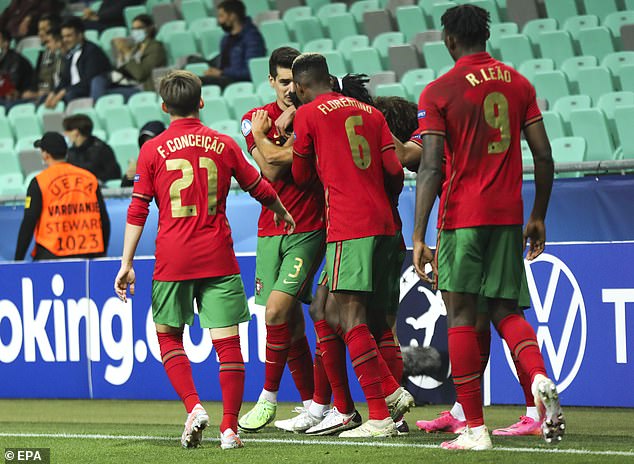 Manchester City fans will be well aware of the German’s talents, but after a handful of loan spells, the forward is finally showing his quality during a ruthless spell at Belgian outfit Anderlecht.

Nmecha has smashed in 21 goals in 41 games for Vincent Kompany’s men this season and is now leading the charge for Germany’s U21 side – but he could have easily been doing it for the Three Lions.

The 22-year-old was born in Germany but had represented England at six levels between U16 and U21 having grown up in Manchester – and even formed part of the squad that won the Toulon Tournament in 2019 under Aidy Boothroyd, coming on in the final against Mexico. 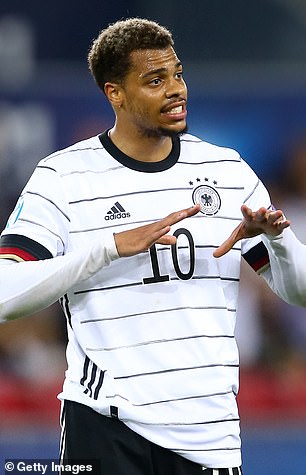 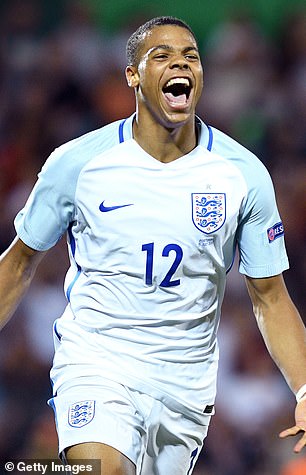 But he declared for his birth country in March 2019 and has since played 19 times, scoring 11 goals, and actually featured against his former international team in a 2-1 win during the same month he switched sides.

He is currently the joint top scorer at the U21 European Championships this year, with three strikes to his name having found the net against Hungary, Holland and Denmark.

The Wolfsburg right back has a pretty interesting story to tell when asked about how his big break came about.

He was at Mainz and preparing for a routine game with the reserve side in 2018 when he was told the first team wanted him for a match against RB Leipzig – forcing him to get off the coach.

It proved to be a stunning decision by the German outfit as he started the game in midfield, putting in a superb display by covering more ground than any other player and capping off his day by netting their third goal in stoppage time, with the team romping to a 3-0 win. 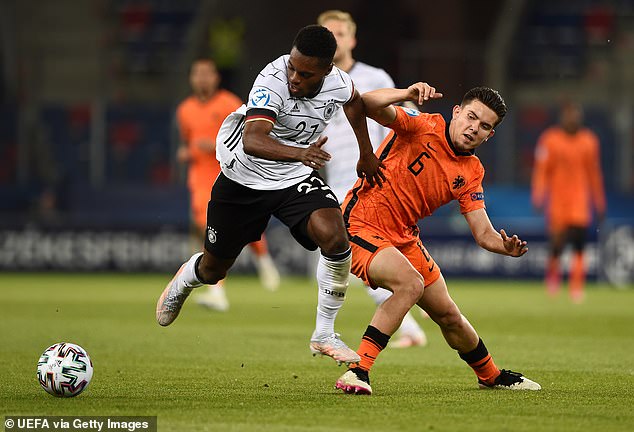 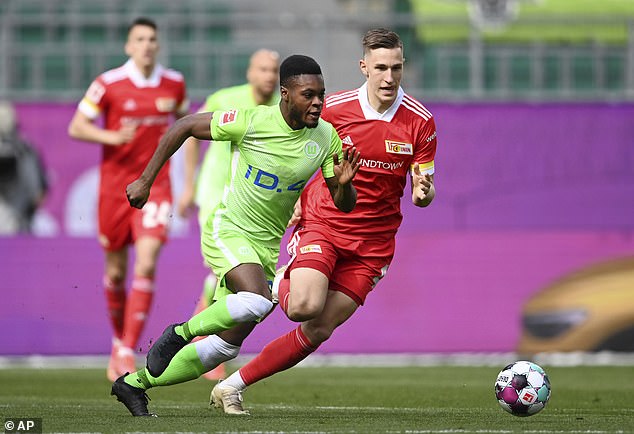 ‘I found out at a motorway service station that I should get off the bus,’ he said. ‘It took me 45 minutes to work out where I was, but in the end I got there and the fans were happy, my team-mates were happy, I was happy. My debut could not have gone any better.’

The versatile star, who has a sole cap for Germany, went on to play 16 times for the senior side in the 2018-19 season – making a total of 54 outings before joining Wolfsburg in 2020.

Last season Baku – linked with Liverpool in recent weeks – saw himself finish as Wolfsburg’s third top goal scorer with six and their second highest provider of assists – also with six – and he’s carrying that form into the Euros.

He has two goals and two assists at this tournament – including a quickfire brace in the 3-0 win over Hungary in March.

The man who got Germany to the final. He netted twice in the semi-final victory over the Netherlands – a game that saw him make history.

His opener after just 29 seconds was the fastest goal ever scored at the U21 finals, and he went on to add another just eight minutes later.

Germany kicked off and sprayed a few passes around the defence before a sweeping move ended with Nmecha putting a cross on a plate with the outside of his foot – and Wirtz could hardly miss. 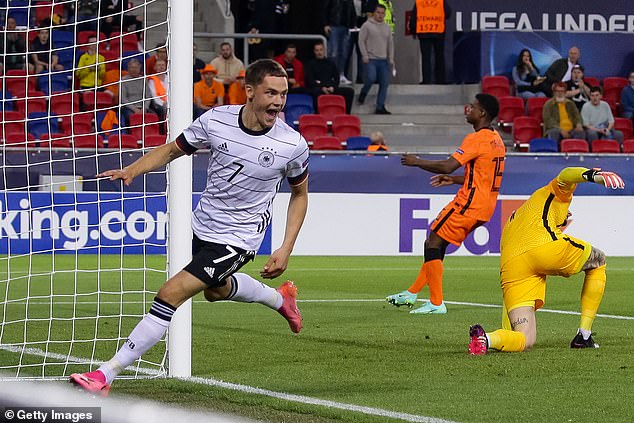 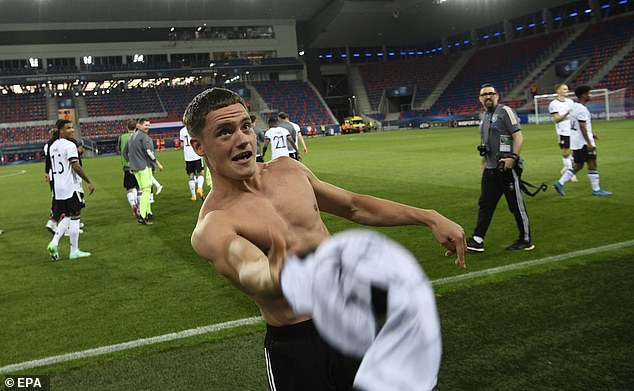 The goal broke David Rozehnal’s record for Czech Republic back in 2002, and the Bayer Leverkusen forward – who is their youngest ever debutant – called his brace ‘an indescribable feeling’.

‘This is simply an indescribable feeling,’ he said.

‘It’s so nice that I was able to give this to the guys and the whole team. Today I also had a bit of luck in my side, and I took advantage of that.’

But he brushed off the hype around his record-breaking goal, saying it meant more to him that he was off the mark for his country. 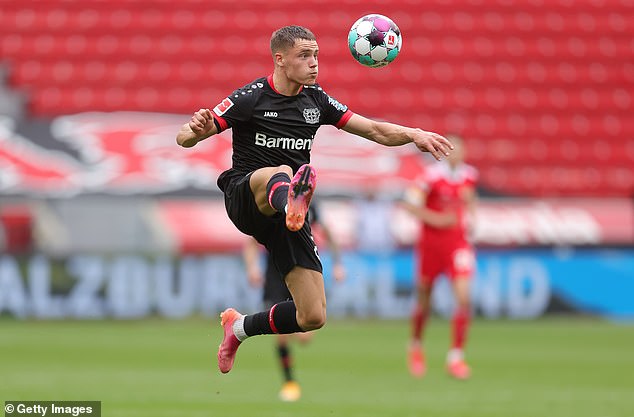 ‘The record doesn’t interest me that much,’ he added.

‘Scoring a goal is always nice. But these were my first goals ever for Germany. To score for my country in a game like that, that’s just nice.’

Still just 18, hopes are high for Wirtz, who played 38 times for Leverkusen this season and has been hailed as ‘the next Kai Havertz’ as he scored eight goals and laid on seven assists.

Porto’s promising creative midfielder Vieira shows quick feet, a burning desire to drive forwards with the ball from deep and he has played a huge role in taking his side to the final.

He has played all five of Portugal’s games at the tournament and he inspired the winning goal against Spain with his deflected strike eventually going down as a Jorge Cuenca own goal.

‘I don’t know if it’s mine or if it’s an own goal,’ he said after the game. ‘What matters is the victory. We are a very united team. That is one of our greatest strengths.

‘We knew that Spain would often force us to defend with a lower block. They have a lot of quality. Now we enjoy it and we are very happy to go to the final.’ 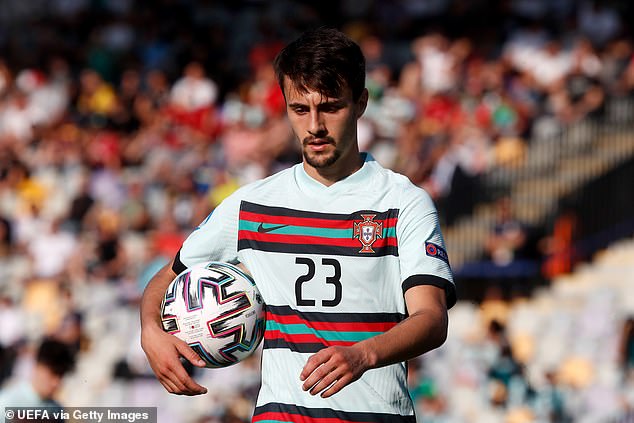 Vieira, who has often been deployed as the attacking midfielder just behind the two strikers, is reportedly a target for Arsenal as Mikel Arteta seeks to find a midfielder who can open up defences – with Martin Odegaard returning to Real Madrid following his successful loan.

In December, Portuguese media claimed the Gunners were set to make a move for the 21-year-old – with Olympiakos and Marseille rivalling them.

Vieira, who is said to have a release clause of just £30m, has played 27 games for Porto since making his debut in June last year.

The midfielder – who spent last season on loan at Wolves – has been one of the brightest stars at this Euros, despite making only five starts at Molineux.

He has been an ever-present for Portugal and set up Vieira’s winning goal against Spain to take them to the final.

Wolves have the option to sign the 21-year-old permanently from Porto this summer, and they might look to take that up given his sparkling displays in midfield during this tournament. 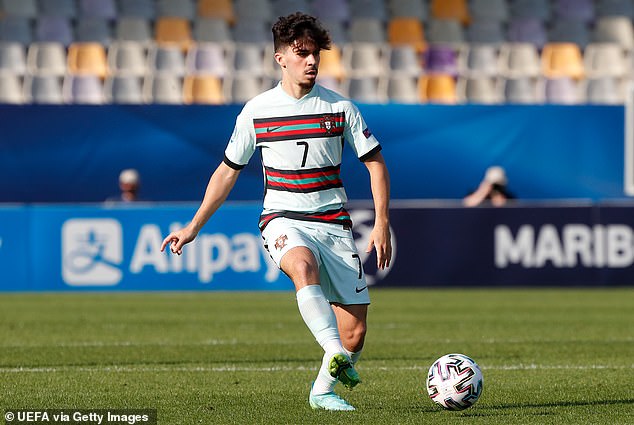 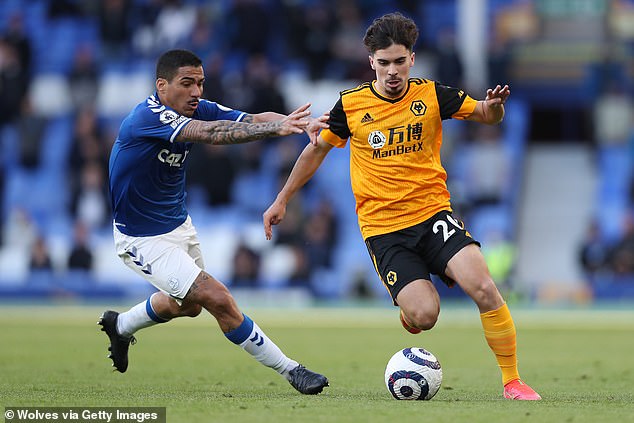 He made 22 appearances overall under countryman Nuno Espirito Santo in the last campaign but still gave hints of his quality, despite being unable to nail down a regular first team spot.

Last month he admitted he was surprised with his lack of game time but hoped to push on next season.

‘I’m not going to lie: I came with the idea of having more minutes, playing more and being in the team more often, but it didn’t happen,’ Vitinha told O Jogo. ‘I had the same type of opportunities and tried to make the most of every bit of it to show my value and help the team.

‘Of course [I think next season will be better] as player always thinks it can be better and I will aim for that.’

The defensive midfielder, who spent last season on loan at Monaco, has emerged as one of the most highly rated in his position in the world in recent years, and was being tracked by both Fulham and Leeds before moving to Ligue 1.

But the 21-year-old struggled to make an impact in France on loan from Benfica, playing just six times, with his boyhood club initially hoping for him to gain more experience with a view to either coming back or enhancing his value.

He started the first two games of the Euros, playing against Croatia and England, alongside Vitinha and former Spurs star Gedson Fernandes. 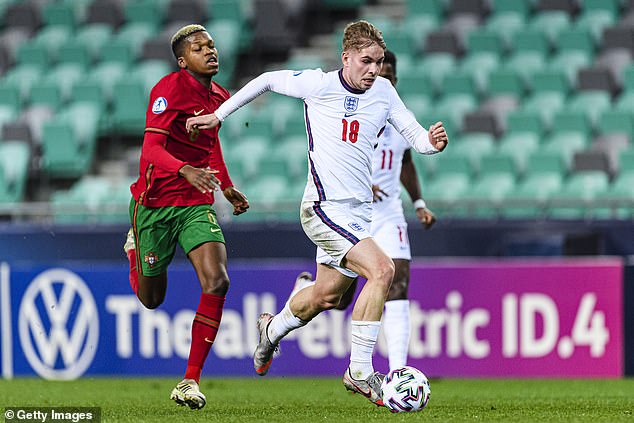 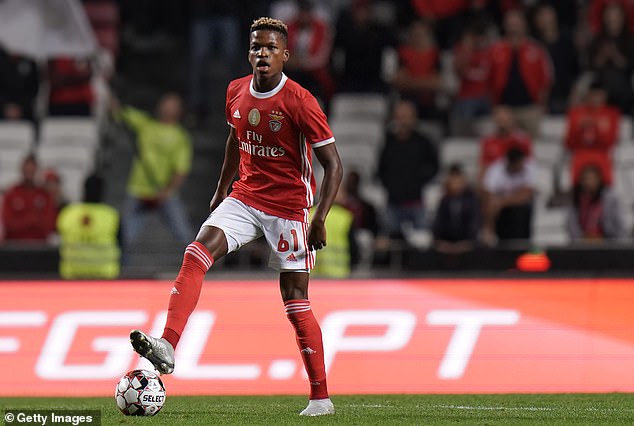 But he has been dropped for the remaining games – coming off the bench in the last two, and will be hopeful of impressing coach Rui Jorge and earning his place back in the final.

Luis came close to joining Fulham last year, with the Cottagers holding talks over a loan move with a view to signing him for £25m. Leeds were also an interested party but opted against making a bid.

After such a disappointing season at Monaco, Luis – who has won the European Championships at both U17 and U19 level – will be keen to play his part and impress in the final in a bid to attract more interest this summer.

He has played 21 times for Benfica since making his debut as a teenager in 2019.

Tags: and, GERMANY:, Portugal, stars, THE
You may also like
Latest Posts