Amid a discussion on the week that has been in Arsenal Football Club, Andrew Allen, a writer and broadcaster who is deputy editor of the hugely popular Arseblog, stops himself mid-conversation.

“Look around,” he says, turning from the top of the steps just above The Armoury to the thousands of Gooners out in force around him. “You suddenly think, f***ing hell, it’s so good being a football fan when everyone’s on the same side and you’re all pulling in the same direction. It just suddenly feels like it means something again.”

A few hours later, Arsenal succumbed to a 13th league defeat of the season. So emerged more fractured conversations on the state of the club on the pitch. Is Mikel Arteta really the saviour? Is this a squad in need of a complete face-lift? As perverse as it may seem, to be weighing up performance-related quandaries felt like a welcome return to what matters. The players. The manager. The football.

But the demonstrations earlier presented an opportunity for a fanbase synonymous with internal unrest to come together. The factions created on matters like Arsene Wenger, Mesut Ozil, and recently Pierre-Emerick Aubameyang and Arteta uniting to create an unshakeable warmth at Friday’s latest fan protest. A warmth not solely down to the glorious sunshine and crisp blue skies giving a greater hue to the red shirts and smoke from the ubiquitous flares. Underpinning it all was untold and unified anger.

On Thursday, the club’s director Josh Kroenke – son of the owner, Stan – and chief executive Vinai Venkatesham participated in a fans forum to apologise for the plans made to join the European Super League that fell through this week. Arsenal’s withdrawal during the collapse of this brazen power grab was accompanied by an apology within their statement. Arteta confirmed those responsible for signing up also apologised to him and the players. Amid the remorse was a reiteration of their desire to have a more open dialogue going forward.

But the key takeaway was an unwillingness to sell up, which narrowed the focus of Friday’s protests on KSE (Kroenke Sports and Entertainment). “We Want Kroenke Out, Say We Want Kroenke Out” took turns with the red mist to occupy the air, as #KroenkeOut signs littered the concourse and surrounding streets, like song sheets that had long been surplus to requirements.

Emboldened by Arteta’s words that fan expression is a key tenet of the game – “for me, what it shows is the power and the capacity when they show that determination and passion to achieve what they want” – the demonstration began at 6pm and carried more or less to full time. By then, police had dispersed the more well-oiled members of the crowd, and Everton’s 1-0 win via a Bernd Leno own goal had shifted focus, if only for a moment.

“I think this has just re-awoken people,” Allen tells The Independent. “For all of their talk of being custodians and trying to take the club forward, this has just pulled the mask back and revealed them for what they are – billionaire owners that are looking to safeguard their investment in a big company.”

It’s a familiar tale for the other six owners emboldened and then shamed by the shambolic ESL heist. And though it’s flippant to say the development meant more to Arsenal fans, the prevailing sense is that they felt this more than the other five fanbases.

Partly because of circumstance: the memories of their glory days are ticking over to “distant”. The league title in 2003/04 will be the last for a while. Even a potential Europa League win at the end of this season carries more significance for its Champions League place than its silverware.

But also because their fan groups have a history of considerable sway. And while the Arsenal Supporters Trust went above and beyond in their lobbying of the government this week, utilising the considerable contacts within the organisation, all were totally in the dark to these most nefarious developments until details began dripping through last weekend like dirty water from an upstairs toilet.

Each to a man, woman, child, and 18 to 24-year-old in those thousands had their own grievance to air. Even those from rival clubs who made their way in the Emirates to lend their fury. And maybe it was to be so close to a seat you would normally occupy, but those with Arsenal in their blood went through the full range of anger, pride and sadness.

“I felt genuinely upset when I heard the news on Sunday,” said Allen, who was first taken to Highbury’s North Bank as a kid by his father and now has a season ticket alongside his parents at the Emirates. 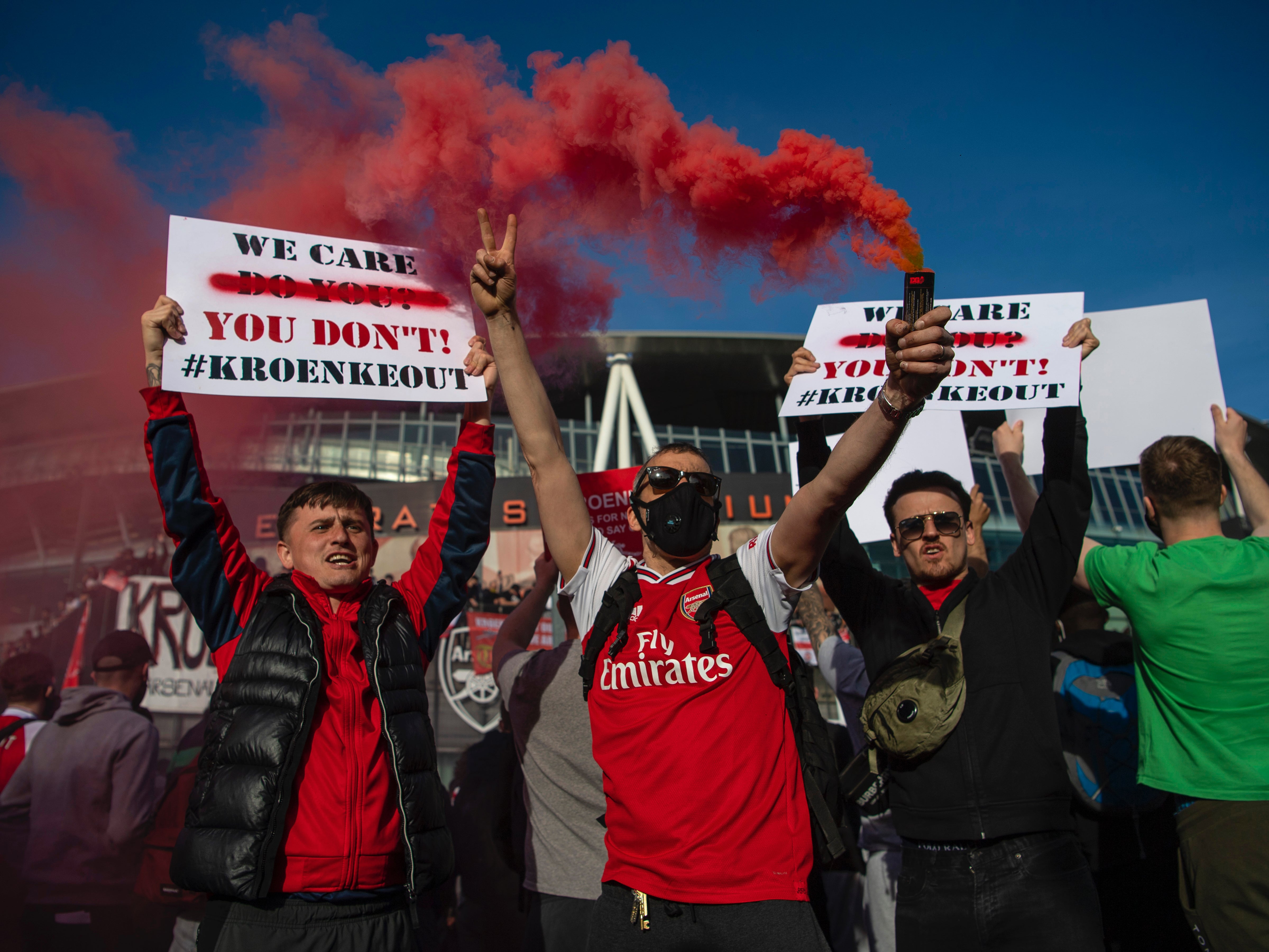 “Do you want to go to a stadium where your relationship with the club is different? I don’t know. I was in a lot of turmoil about what was going on and I was ashamed, embarrassed, frustrated and I was really worried they were going to basically pull apart something I built my life around.

“It was a bit of an existential crisis: if I’m not doing this one thing that’s essential to everything that I do, what am I going to do? I don’t want to be a season ticket-holder for a club that acts like this and behaves like this.”

Another Arsenal fan, Fil, had made his mind up. “I would have basically stopped being an Arsenal supporter until they had either left and we were out of the Super League or until the Kroenkes had left the club.”

Fil has also been a season-ticket holder for more than 20 years, and in attendance for many more. On Thursday night, he told his girlfriend that he would be attending this protest. Not being a football fan, she asked him what it was for. After explaining the premise and the wrongs behind the ESL, she innocently asked, “what’s wrong with that?”

“It was then I realised, she’s basically a mirror for Stan Kroenke and every one of these owners: looking at this from afar, unaware of what makes English football so strong. The fact you’ve got a pyramid that goes way down and every single one of those teams is important. And the second you think you can ignore them, you end up killing yourself. But people who don’t know the game in this country don’t see that.”

Among all the placards and anti-KSE paraphernalia were anecdotes from Arsenal fans who saw this all coming. Many cited Peter Hill-Wood, a former chairman of the club who in 2007, as Kroenke began extending his reach within the boardroom, rallied in public with a set of quotes that are all the more prescient now:

“Call me old-fashioned but we don’t need Kroenke’s money and we don’t want his sort… we are all being seduced that the Americans will ride into town with pots of cash for new players. It simply isn’t the case. They only see an opportunity to make money. They know absolutely nothing about our football and we don’t want these types involved.”

The other aspect many were wrestling with was the club’s insistence they were not drivers of the ESL, but felt compelled to join so as to not be left behind. The spin of painting themselves as the most reluctant of the 12 founding members does not wash. Yet the execution and excuses are in keeping with a familiar theme of passivity and flawed decision-making.

“Over the last 18 months when you look at the way they’ve handled the Ozil situation, the redundancies during the pandemic. A lot of bad PR, real schoolboy errors,” says Allen. “This was also another example of how their decision-making has been so reactive. They don’t seem to have a vision for the club. They just left it for the people inside to run it with no real direction.” 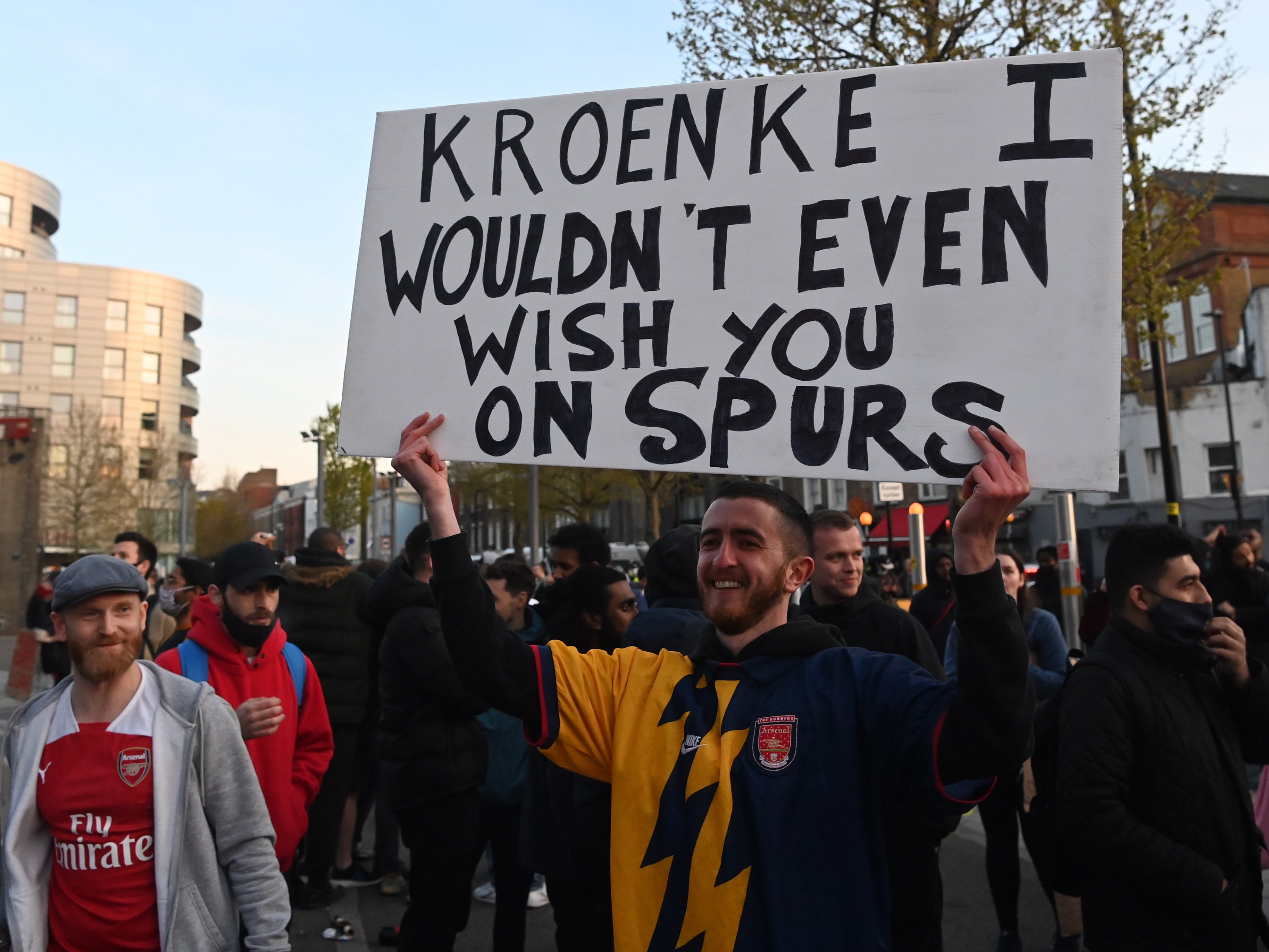 As the crowd began to disperse to find a television for the Everton match, the question is asked. What can be done to reclaim the little trust Josh Kroenke admitted had been shredded?

“To be honest, I’m not necessarily a #KroenkeOut guy,” says Fil, before jokingly looking over his shoulder. “Because I do like the fact when Arsenal spend money, it’s still Arsenal’s money that is being spent. The money that’s been generated by the success of Arsenal over the years and not just some guy who has come in and decided to inflate the financial system in football.

“But I think it’s virtually impossible to regain that trust. They were on thin ice already and if you keep on breaking trust, how do you ever repair it?”

Of course, selling the club is no easy feat. Forbes values Arsenal at $2.8billion, though the Kroenkes would not need to sell the whole thing to hand over the reins to someone else.

At 7:50pm, Spotify founder and CEO Daniel Ek tweeted his desire to take the club off KSE’s hands. Given how detrimental the service has been to musicians, any excitement should be tempered. Then again, altruistic billionaires are hard to find.

Allen offers one final thought before he heads back to cover the Everton match from home. “The club will always be here, the owners will eventually move on. It’s just a case of whether they move on before you or I do.

“But the attachment is a big thing. This is my family club, one I’ve always been proud of. If I were ever to have little versions of me running around, it would be nice to bring them along and not be ashamed of it.”

Tags: European Super League
You may also like
Latest Posts