Paul Merson on Thomas Partey: “When you talk about signings in the summer, he’s got to be number one. I cannot believe, without being horrible here, that Arsenal got him. You’re thinking wow, who didn’t see this?” 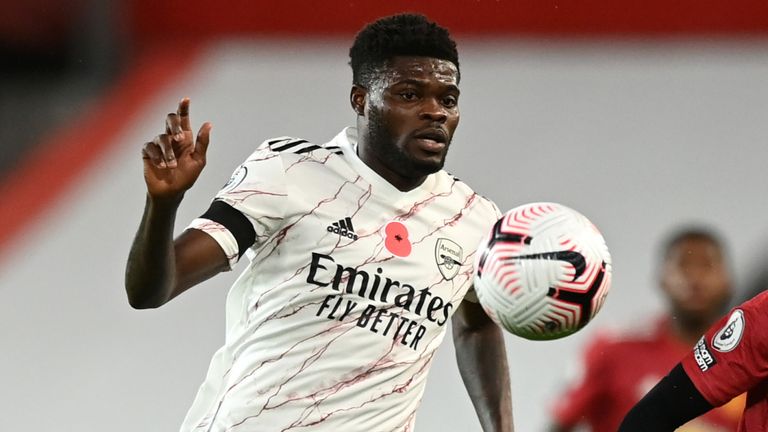 Thomas Partey was the “number one” signing of the summer transfer window, says Paul Merson, who “can’t believe” Arsenal managed to land the midfielder.

Partey won the ball back more than anyone else on the pitch in Arsenal’s 1-0 win at Manchester United on Sunday – their first win at a ‘big six’ rival in 29 games – with Sky Sports pundit and ex-England midfielder Jamie Redknapp calling the 27-year-old “a midfield player who can do everything”, while Roy Keane compared him to Gunners legend Patrick Vieira.

Merson, who played alongside Vieira in the final year of his Highbury career in 1996/97, highlighted the difference the Ghana international has already made at his new club, after joining from Atletico Madrid on Transfer Deadline Day last month.

“It was a good away performance, it wasn’t great, I wouldn’t get carried away and say oh my god it’s a turning point,” he said. “They beat a terribly, terribly poor Manchester United team on the day. They’ve done a job, we’ve seen them lose those games over the last five or six years. But I think Partey’s a massive, massive difference. I mean, what a signing.

“When you talk about signings in the summer, he’s got to be number one. I cannot believe, without being horrible here, that Arsenal got him. I don’t mean that in a horrible way, they’re all crying out for it – I know Manchester United are top-heavy and they’ve got Fred, McTominay and Matic, but they haven’t got a Partey.

“Manchester City too, Fernandinho’s coming towards the end, Rodri hasn’t really pulled up any trees. You’re thinking wow, who didn’t see this?

“When you’re talking about holding midfield players and you want discipline, there’s no better place for discipline than Atletico Madrid. They play the ultimate disciplined way. They can go away and shut up shop, then other days they can go and attack teams. He’s a massive part of that.

“Fair play to Arsenal, now you’ve got to hope they go and kick on. They’ve been unlucky, they probably shouldn’t have got beaten by Leicester, at Manchester City they needed to score when they had a couple of chances, so for me they’re not a million miles away from a very open league but they’ve got to kick on.

“There’s no point getting beaten by Aston Villa next week now. You’ve got to go back to back. I said the other day, can I see Arsenal winning seven or eight on the trot? No, I can’t. But they need to start putting four and five wins together and if they can do that, who knows.”

‘Trick being missed’ on Partey-Ozil combination

Arsenal have left midfielder Mesut Ozil – once the club’s most expensive signing – out of both their Premier League and Europa League squads, meaning the World Cup winner can only feature in the Carabao Cup before the domestic registration window re-opens in the new year.

He has not played a single minute of Premier League football since the Gunners’ 1-0 win over West Ham on March 7, but Merson feels the arrival of Partey could have facilitated helping the German, whose Arsenal career has often proven stop-start, get back to his best.

“I think there was a stage for Ozil now Partey’s in the team,” he said. “I watched Chelsea play against Burnley, they played a back four, they played N’Golo Kante in front of the back four, and let everyone else get on with it. They ripped Burnley to shreds, I haven’t seen too many teams make Burnley look bang average.

“Because Kante was playing in that holding role, it gave Kai Havertz and Mason Mount the freedom to do what they want, they didn’t have to spend most of their time on the edge of their own box tracking back. With Partey in there now who’s so dominant in there and doesn’t lose the ball, I think there was a place for Ozil now. I think there was.

“Then if they do drop someone in to pick up Ozil, you’ve got someone like Partey who’s very comfortable on the ball and can hurt you. Then that frees a midfield player up. I think there’s a trick being missed here, but that’s just me.

“He’s that good I think it would’ve opened up a space for Ozil. But he’s not for one reason, and that’s because he doesn’t run around. Why did Manchester United get beaten on Sunday? Because they don’t run around.”