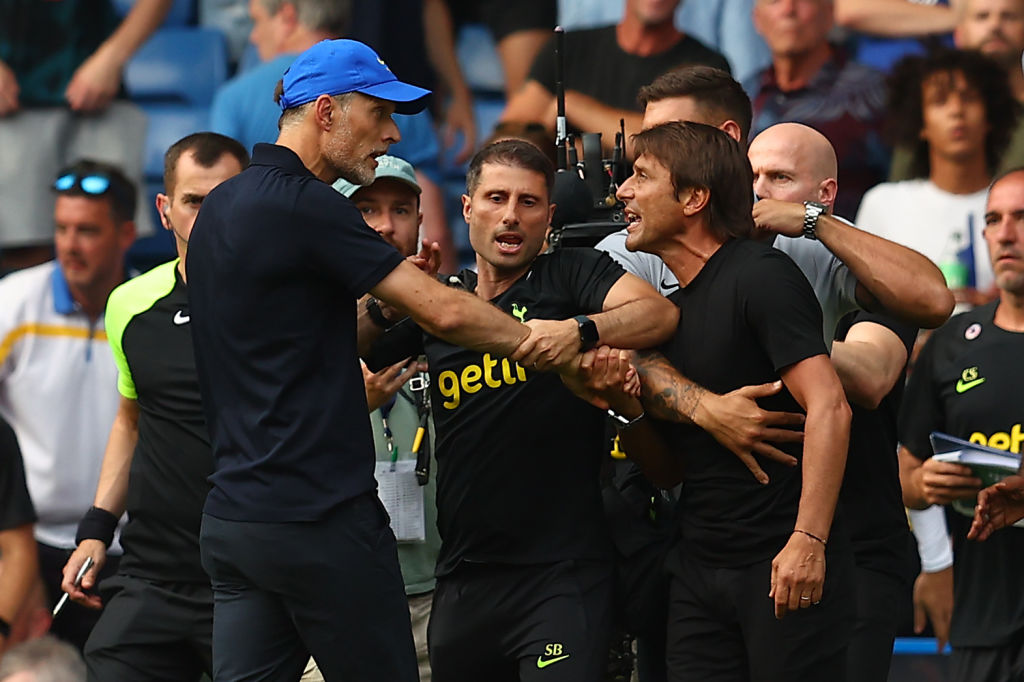 Thomas Tuchel and Antonio Conte have been fined for their Stamford Bridge row, with the Chelsea boss also handed a one-game touchline ban.

The two were initially separated after Pierre-Emile Højbjerg equallised for Spurs midway though the contest.

A post-match handshake quickly descended into another row at full-time with both managers shown red cards as a result by referee Anthony Taylor.

Both managers have admitted improper conduct with Tuchel receiving a heftier fine and a one-match ban.

His ban has been suspended temporarily, pending the full written reasons for the decision, meaning he will be allowed to sit in the dugout for Sunday’s clash against Leeds at Elland Road.

‘An independent regulatory commission has today ordered that Thomas Tuchel be fined £35,000 and banned from the touchline for one match, and Antonio Conte be fined £15,000 after they respectively breached FA Rule E3,’ an FA statement read.

‘Thomas Tuchel and Antonio Conte admitted that their behaviour after the final whistle of the Premier League game between Chelsea FC and Tottenham Hotspur FC on Sunday, August 14, 2022, was improper, and both managers requested a paper hearing.

‘These sanctions are subject to appeal, and Thomas Tuchel’s one-match touchline ban has been suspended temporarily pending the independent regulatory commission’s written reasons for its decision that will be made available in due course.’

Tuchel was left hugely frustrated with a number of decisions he felt went Tottenham’s way during the fiery derby, insisting referee Taylor should not officiate Chelsea matches in the future.

The FA’s separate investigation into those post-match media comments in relation to the fixture remains ongoing.