Tottenham boss Jose Mourinho could face a battle to keep Jan Vertonghen at the club as Inter Milan have made the defender a top summer transfer target, according to reports in Italy. The defender is out of contract at the end of the season and has yet to agree a new deal with the north London club.

Vertonghen has been in and out of the Tottenham squad this season and has made a total of 24 appearances for the club in all competitions.

Mourinho has tinkered with his formation in recent weeks as he looks to find the best solution to dealing with an injury-depleted squad.

As a result the 32-year-old has found himself coming in and out of Mourinho’s starting XI.

Vertonghen is in the final months of his current deal with the club and as it stands can leave Spurs on a free in the summer, with Serie A a possible future destination. 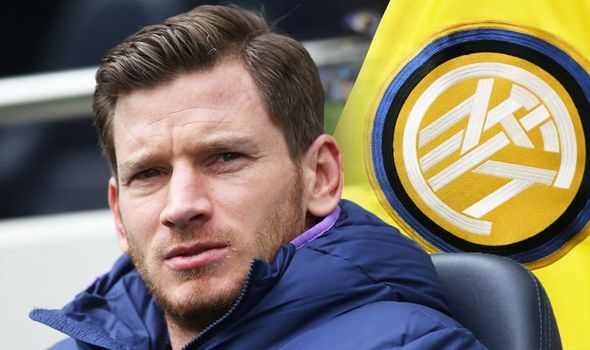 According to Italian publication CalcioMercato, Inter have made Vertonghen one of their three Premier League summer transfer targets.

And the Italian club are now hoping Vertonghen will follow Christian Eriksen in leaving Tottenham to join them.

The report also claims the Nerazzurri are also interested in United’s young winger Tahith Chong, who is also out of contract at the end of the season, and Arsenal striker Pierre-Emerick Aubameyang, who will have one year left on his current deal come the summer.

Vertonghen and Tottenham have not been able to agree terms on a new deal and the player recently looked distraught after he was substituted in their FA Cup fourth-round replay against Southampton at the beginning of February.

The defender appeared to be close to tears as he sat in the dugout with his head in his hands after being taken off in the 54th minute.

However, after the game Mourinho insisted the defender is still part of his plans and the decision to take him off had nothing to do with the defender’s future at the club. 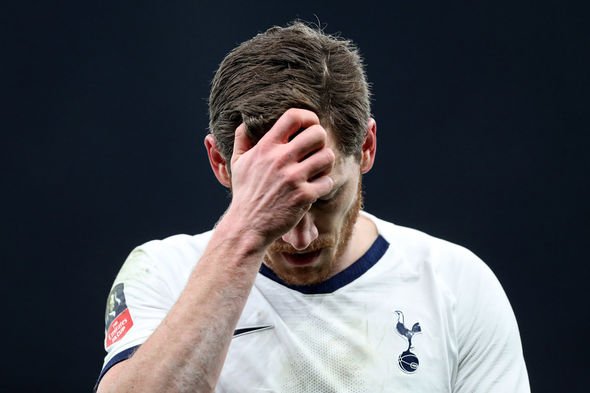 “It was a tactical decision,” Mourinho said after the game.

“We were playing with a back five and I thought that would give us more security for a team that I knew were very short in attack and was very difficult to create many chances.”

Before going on to say: “You know, I decided to keep [Toby] Alderweireld on and especially [Japhet] Tanganga in the middle, fast players, so I took off Jan.

“There is no relation between that and his future.”

Vertonghen started in Spurs’ 2-1 defeat to Chelsea at Stamford Bridge but was then an unused substitute in Tottenham’s recent 3-2 win over Wolves last Sunday. Mourinho went with a back three of Davinson Sanchez, Eric Died and Tanganga.

Spurs host Norwich at the Tottenham Hotspur Stadium today in the fifth round of the FA Cup and Mourinho’s comments ahead of the game could be bad news for Vertonghen.

This is because the Portuguese coach admitted that he is planning on giving Dier opportunities to play at centre-back in the future.

“I think he has the potential to be a central defender – and of course the feelings of the players are very important,” Mourinho said about Dier.

“It’s much better for a coach and for a player to be coincident in their feelings. At this moment I am very happy with his performance – I will give him the opportunity in the future to play as a centre-back with a back four, and let’s try together to make the best decision for him and for the team.”