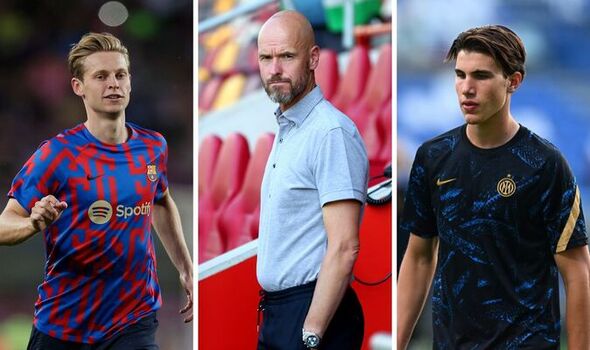 Arsenal, Chelsea and Manchester United are among Premier League clubs expected to complete business before the summer transfer window slams shut at 11pm on September 1. Over £1.3billion has been spent in the English top-flight so far, and top spenders Chelsea (£160m) look destined to extend that status further with a few more additions in Thomas Tuchel’s sights.

The Blues are in talks over Pierre-Emerick Aubameyang and Wesley Fofana and are challenging United for his Barcelona teammate Frenkie de Jong. They also have a £16m decision to make over another target as Todd Boehly plans to back Tuchel with north of £300m in his first summer as owner.

Meanwhile, Arsenal are battling the Red Devils for a highly-rated Premier League midfielder and could launch a pursuit before the transfer deadline. Barca boss Xavi Hernandez has also provided an update on De Jong’s situation as his whirlwind summer saga nears its judgement day.

Chelsea have a decision to make in their pursuit of Inter Milan starlet Cesare Casasei after the Serie A giants made fresh demands over a transfer.

The Mirror report Inter want £15.5m up front after rejecting an initial proposal thought to be worth around £8.5m.

But the Nerazzurri are also looking to insert a buy-back clause into the detail to retain to option to take Casadei back to the San Siro at a later date.

Thomas Tuchel must now decide whether he’s willing to bow down to the demands or walk away from the talented 19-year-old.

The Sunday Mirror report they are weighing up moves this month after the 20-year-old’s impressive start to life in England.

West Ham United join them as Premier League suitors, while Atletico Madrid, Bayer Leverkusen and Juventus are among those interested overseas.

Brighton are in no position to sell one of their best assets, though, and parties eyeing Caicedo may have to be patient before making a move for his signature.

Welcome to another day of transfer news and gossip as the summer window rolls on across the Premier League and Europe.

Stay tuned for regular updates throughout your Sunday…