Sydney FC coach Steve Corica will have a full squad to select from for the first time this season after three players were wiped off their long-term injury list and returned to full training. 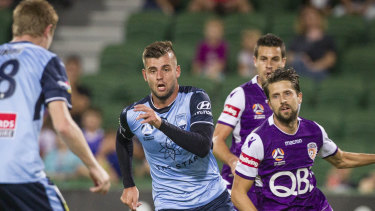 Coming back: Chris Zuvela is set to make his return after nearly 19 months on the sideline. Credit:Tony McDonough

The Sky Blues had to wait six weeks to have Ivanovic back in the frame for selection but it is the returns of Zullo and Zuvela that have been the most anticipated for the club.

Illness, followed by a quad injury then a lengthy calf problem has limited Zullo to only two starts this season while Zuvela is edging closer towards playing his first minutes since August 2018. The midfielder underwent a knee reconstruction at the start of last season after rupturing his anterior cruciate ligament and suffered complications in his rehabilitation that delayed his recovery.

The 23-year-old is now putting his hand up for selection after nearly 19 months on the sidelines, having completed full training this week.

"He was out there today doing full training as well, I am very excited for him and hopefully he can get some minutes this year," Zullo said of Zuvela.

The returning trio forged a strong bond while working back towards full fitness in recent months.

"I have been in lucky in a way that I had two young players to do your rehab with. When you do it by yourself you get a bit stale. It’s made it a little bit easier for us, we push each other," Zullo said. "I am really happy for Luke but really excited for Chris, he’s coming back from an ACL."

The Sky Blues will likely ease Zuvela back into the squad while building up his fitness, with Zullo the stronger chance of being included in the match-day squad for Saturday's clash against third-placed Perth Glory. He won't know until Friday whether he will be in the squad but is already itching to get back on the field after spending almost the entire season in a state of rehab.

"It’s kind of like the start of the season for me, I am really excited," he said. "I feel like I have rebuilt myself from the ground up. I had a few niggling problems and with my last calf injury I was trying to come in and out and struggling to get consistent time on the field without any injury breaks.

"Although this was a really bad injury – it was an eight week injury – it gave me the chance to fix these little issues."

Tags: back, From, give, injury, to, Trio
You may also like
Latest Posts