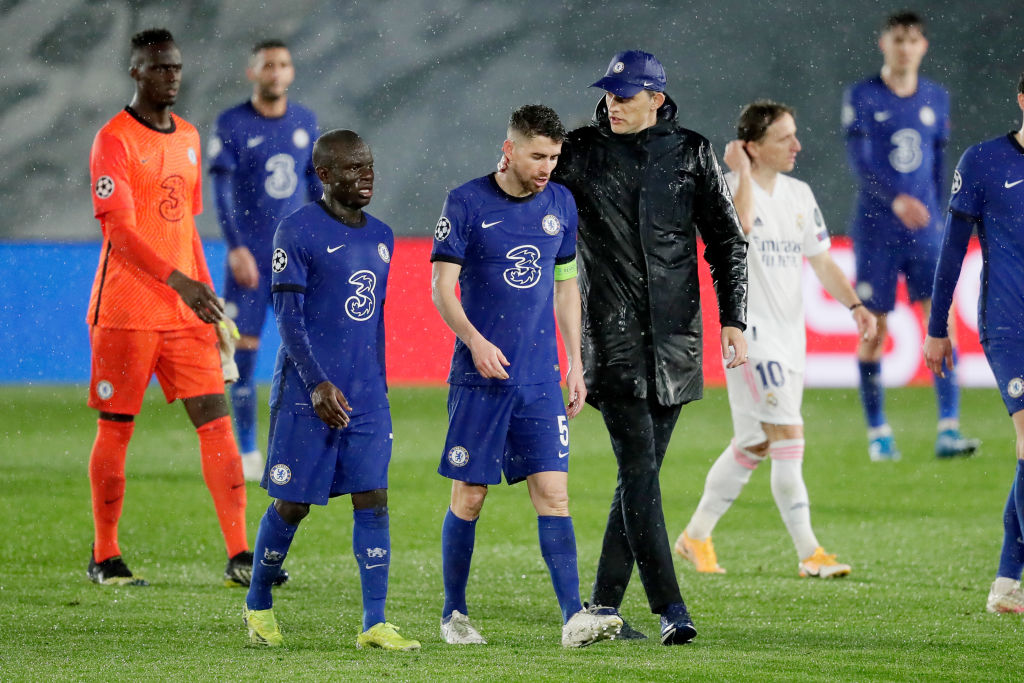 Thomas Tuchel has revealed Cesar Azpilicueta, Christian Pulisic and Timo Werner were taken off in Chelsea’s 1-1 with Real Madrid as they were struggling with tiredness amid the club’s relentless end-of-season schedule.

Pulisic opened the scoring with a superb solo effort in the 14th minute of Tuesday’s Champions League semi-final first leg as the visitors started the far brighter of the two teams at Madrid’s Alfredo Di Stefano Stadium.

Werner – who scored his first goal since February at the weekend – had earlier fluffed a golden chance to break the deadlock, firing a close-range strike straight at Thibaut Courtois.

The Blues were soon made to pay for failing to extend their advantage while on the ascendancy as Karim Benzema equalised with an unstoppable volleyed finish on the half-hour mark.

The scoreline remained the same to set up an enticing second leg at Stamford Bridge next week and Chelsea – despite possibly feeling they missed an opportunity – will be the happier when reflecting on the result given they take a crucial away goal back to west London.

Reece James, Hakim Ziyech and Kai Havertz were introduced in place of Azpilicueta, Pulisic and Werner as Tuchel looked to inject some life into his side with 20 minutes remaining.

All three that made may were feeling the effects of fatigue and Tuchel felt it was hardly surprising given his players were given just a two-day gap after their Premier League clash with top-four rivals West Ham.

Asked to sum up the performance, the Chelsea manager told BT Sport: ‘I think we started the game very, very well and very aggressive with a lot of courage and a lot of quality.

‘We deserved to win the first half, for me. We had a lot of chances, we had a lot of half chances where we missed precision in the last ball to have more opportunities to score.

‘Unfortunately, they scored from a set-piece. There was nothing else normally to defend for us, we did not allow any chances so it was a bit of a disappointing result at half-time.

‘It was important that we stayed calm at half-time, didn’t lose confidence and we fight back into the game.

‘But today I felt second half was a very tactical game, the speed and the intensity dropped and you could feel that we were a bit tired with only two days in between two away games.

‘We suffered today from that and if we had one more day to recover it would have been a big chance to keep the intensity up and maybe hurt Madrid in the second half. Like this it was not possible and we have to live with 1-1.’

Pressed on whether it was always his plan to ring the changes just past the hour-mark, Tuchel replied: ‘No, you cannot plan.

‘But in this moment we lost too many balls, we had too many technical errors.

‘We worked very hard last week so no, we decide from what we see and what is necessary in the game.’

The German felt Chelsea could have come away from Madrid the deserved victors had they had more ‘composure’ and ‘precision’ in the final third when they were in the ascendancy.

On Pulisic’s goal, Tuchel said: ‘It was well deserved and like I said, we should have won the first half. We should have scored minimum one more when the chances and half chances were there.

‘We had many ball wins, we had good control, good attacks, good switches of play, looked very confident and strong and it was not too easy to concede a goal more or less out of nothing.

‘It can always happen against the individual quality of Real Madrid, that you lose a bit of confidence.

‘So a bit more composure and a bit more precision in front of the goal and we could have won the first half and be now the deserved winner.