Turkey’s head coach Senol Gunes admitted his side endured a torrid opening tie at Euro 2020 after their 3-0 thrashing by Italy.

Having been on the back foot from kick-off but holding their own in the first half, Turkey totally capitulated in the second half and shipped three goals, the first an own goal Merih Demiral.

The defender now holds the unwanted record of being the first player to score an own goal as the opening goal of a Euros tournament. Strikers from Ciro Immobile and Lorenzo Insigne capped off an absymal night for Gunes’ men.

‘It was not our day,’ he said after the match. ‘We started to lose the ball and couldn’t get forward. Italy were better – we lost to the better team.

‘They were more dominant than us, we lost the ball so many times and this just gave the advantage to our opponent.

‘After we conceded the first goal we just really got distracted and lost control of the game.

While praising Italy’s commanding performance, Gunes was eager to put the heavy defeat behind him and focus on Turkey’s remaining fixtures in Group A. ‘I can say, technically speaking, we had a very strong Italian team. I’m not very satisfied with the score. I was expecting better football here.

‘But even if we lose or win, the competition will continue. We just lost against a host team and we have two more important games against Wales and Switzerland.

‘We’ll tidy ourselves up and will start to prepare for those. Italy used the pitch very well, they just kept the ball and physically we fell from the game.’

Turkey forward Kenan Karaman and defender Umut Meras apologised to the nation’s fans for the defeat.

‘We are really sorry about our performance tonight,’ Karaman said. ‘Italy were technically superior to us. But it’s a tournament and we have to focus on our next two games.’ 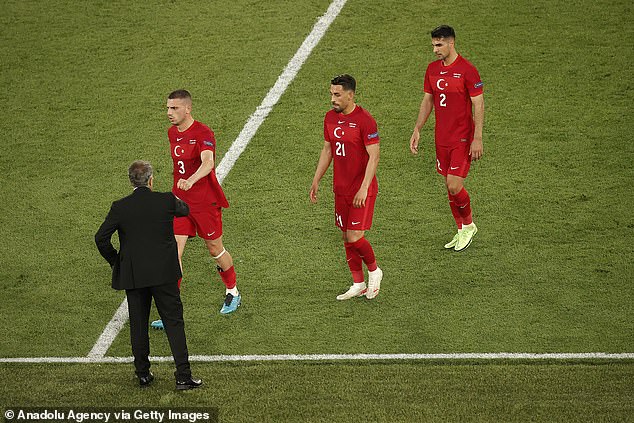 Meras added: ‘We couldn’t reflect on the field what we had in mind. We are sorry. We aim to get six points from the remaining two matches in the group,’ he said.

While praising Italy’s performance, pundit Alan Shearer poured scorn on Turkey’s lacklustre efforts, saying on BBC: ‘Turkey were poor, they were made to look poor.

‘They had nowhere to go when they had the ball but that was because of the way the Italians pressed them.

‘Turkey had to rely on that many men to get back and defend. When they got the ball back they just had to get it forward.’