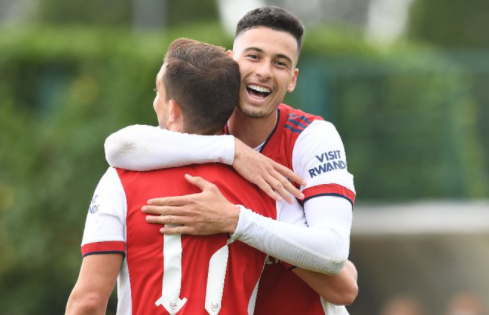 Arsenal scored their first goals of the new campaign against Premier League opposition, albeit in a behind closed doors friendly against Brentford on Thursday.

Having lost three games in succession, including against the newly promoted Bees, Mikel Arteta is under growing pressure to turn the his crisis-ridden side around.

The Spaniard has invested close to £160million on new talent over the course of the summer transfer window with versatile Japan international defender Takehiro Tomiyasu arriving on deadline day to bolster a defence which has shipped nine goals already.

Headline summer recruit, Ben White, who has missed the last two matches with Covid made his return against Brentford, however, while Gabriel Magalhaes featured for the first team for the first time since suffering an injury while on international Olympic duty with Brazil last month.

Both players came through unscathed as an experienced Arsenal side ran out comfortable 4-0 winners, with all their goals coming in the second half.

Intriguingly, Arsenal lined up in a 3-4-3 formation, with White and Gabriel starting alongside Pablo Mari and Calum Chambers and Cedric Soares operating as wing-backs.

It was Gabriel who broke the deadlock with a neat finish from close range, before Alex Lacazette curled home an excellent free kick to double Arsenal’s advantage.

Cedric, who has been linked with a move to Fenerbahce, struck twice late on to hand beleaguered Arsenal something of a confidence boost ahead of a crucial run of fixtures which could determine the future of their current manager.

Nicolas Pepe also made his return after missing the calamitous 5-0 defeat at the Etihad last weekend following a bout of illness, while highly-rated teenager Charlie Patino played for nearly an hour after Mohamed Elneny was withdrawn as a precaution.