UEFA also said it had appointed an Ethics and Disciplinary Inspector to conduct a separate investigation into the “events involving supporters which occurred inside and around the stadium”. 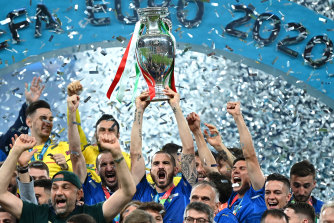 Italy celebrate after winning Euro 2020 in a penalty shootout.Credit:Getty Images

The final, which Italy won in a penalty shootout, was marred by clashes between fans and officials in and around the stadium.

British police, who said 19 of its officers were injured, have so far arrested a total of 86 people. Some 53 of the arrests were at Wembley.

Boos were heard around the stadium when the Italian anthem was played before kickoff while a pitch invader interrupted the match, with the referee stopping play while the stewards chased him down.

“The case will be dealt with by the UEFA Control, Ethics and Disciplinary Body in due course,” UEFA said.

The Met Police had urged fans not to travel to Wembley if they did not have a ticket. However, several fans breached security cordons and charged into the perimeter area of Wembley before kickoff.

The FA said on Monday they would conduct a full review into the security breach. They condemned the behaviour of fans who forced their way into the stadium and apologised to those who had tickets for the “unprecedented level of public disorder”.

British Formula One driver Lando Norris was mugged and had his watch worth £40,000 ($74,000) stolen, with his team McLaren saying the 21-year-old was “understandably shaken”.

Last week the FA were fined €30,000 ($47,425) after a laser pointer was shone at Denmark goalkeeper Kasper Schmeichel during what proved to be the deciding moment of their Euro 2020 semi-final.

The FA were also charged for fans booing during the Danish anthem and for the setting off of fireworks during the semi-final.