Exciting Australian youth prospect Cristian Volpato is edging closer towards playing for his ancestral home of Italy after Serie A giants AS Roma refused to release him for the Young Socceroos.

The 18-year-old from Sydney made his Serie A debut off the bench against champions Inter Milan last month and could take the first steps of his international career with an expected call-up to the Italian youth team in the coming months. The nimble forward is highly regarded by Football Australia, which has made a number of attempts to bring Volpato into Australia’s youth set-up. Those moves hit a road block in late October when Roma refused to release him for the Under 23 Asian Cup qualifiers in Tajikistan, which were not held during an international window. 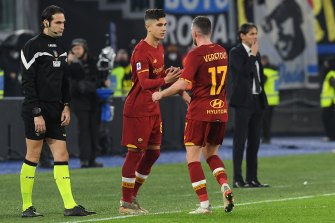 Australia’s national team department is understood to have spoken to Roma and Volpato’s family in the past month about his international future. The Italian giants believe his progress will be benefited either by playing senior football for Australia or youth football for Italy, where there is less travel, games are more frequent and often against better opposition than in Asia.

According to several Football Australia sources, Roma were willing to release Volpato for international duty only if he was selected for the Socceroos, seeing little value in the teenager travelling long distances for youth football in the Asian confederation. While this stance is not uncommon among European clubs, it is another hurdle between Volpato and playing for Australia.

Despite making his Serie A debut, Volpato is unlikely to be selected for the Socceroos’ World Cup qualifier at home to Vietnam on January 27. Travel and logistical difficulties are hampering plans for an Australian youth camp in the next two international windows, increasing the chances of Volpato starting his international career with Italy.

Volpato was selected for the Italian under-19 team in September but withdrew due to a minor injury. However, he is understood to be in line for another call-up to the Azzurrini ahead of March’s qualifiers for the European Under-19 Championship.

Should Italy qualify, the tournament will clash with Australia’s Under-23 Asian Cup campaign, which Volpato is understood to be in the selection frame for.

While Football Australia is eager to bring Volpato into its youth system, it’s understood there is a resignation his immediate future could be with Italy. Should he play for Italy’s youth team, it won’t necessarily tie him to his ancestral home. FIFA rules allow players with dual nationality to represent more than one country at youth level. They become tied to one team only after playing a competitive game for a full national side when over the age of 18.

Despite the opportunity to cement his future with the Socceroos, it’s unlikely Volpato will be selected for Australia’s senior team in the coming qualifiers due to the side’s precarious footing on the path to the Qatar World Cup. The Socceroos are third in their group and must finish in the top two to seal automatic qualification. A third-place finish would mean facing two play-off matches, one against the third-placed team of the other Asian qualifying group and then a one-off match against the fifth-placed team from South America.

Meanwhile, Western Sydney captain Rhys Williams is facing a lengthy spell on the sidelines after rupturing his hamstring tendon. Williams was forced off the field in Sunday's 3-3 draw away to Melbourne City and could be out for most of this season after the scans revealed the extent of his injury on Wednesday.