Match report as Wales exit Euro 2020 with a disappointing 4-0 defeat to Denmark in the last 16; Kasper Dolberg scored twice, while Joakim Maehle and Martin Braithwaite were also on target as the brilliant Danes marched on without Christian Eriksen 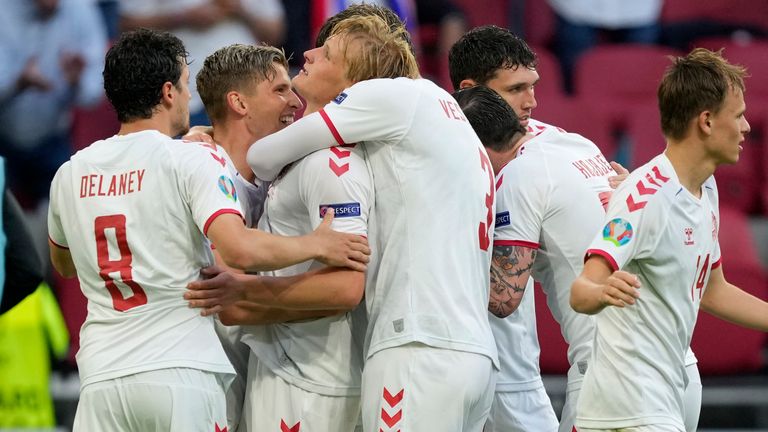 Wales exited Euro 2020 at the last-16 stage as Denmark continued their emotional quest for glory with an emphatic 4-0 victory at Amsterdam’s Johan Cruyff Arena.

The Danes, rocked by Christian Eriksen’s cardiac arrest in Copenhagen only a fortnight ago, set up a quarter-final tie against either the Netherlands or the Czech Republic thanks to Kasper Dolberg’s double and late strikes from Joakim Maehle and Martin Braithwaite.

Dolberg, starting in place of the injured Yussuf Poulsen, struck the opener with an outstanding, curling finish from outside the box midway through the first half, then pounced on a Neco Williams error to double Denmark’s lead shortly after half-time.

Maehle hit the third in the penultimate minute of normal time when he collected a Mathias Jensen cross, cut inside his man and fired home from eight yards out, before Braithwaite added a fourth, after Harry Wilson had been sent off for Wales, which was awarded by VAR having initially been ruled out for offside.

Wales, semi-finalists at Euro 2016 and second-placed qualifiers from Group A having taken four points from three games with Switzerland, Turkey and Italy, started brightly in Amsterdam but faded badly after the opener and ultimately exited the tournament in disappointing fashion.

The dominant Danes, who were buoyed by a partisan crowd with Welsh supporters not permitted to travel to the Dutch capital, scored four goals for the second consecutive game following their 4-1 thrashing of Russia in Group B, and become the first side to reach the last eight in the absence of the recovering Eriksen.