Football Federation Australia says it will review its own policies around heading the ball after three British associations banned the skill from being practised at training by junior players to prevent concussions.

But a Sydney academic has warned FFA that simply falling in line would be a "reactionary" move, and believes teaching juniors proper heading technique would be a much better way of mitigating risk. 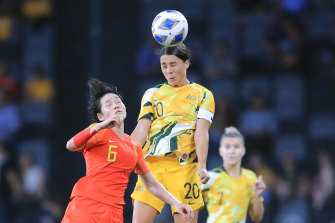 Sam Kerr of the Matildas contests a header with Zhang Xin of China in their Olympic qualifier earlier this month.Credit:Getty Images

The English Football Association (FA) this week released new guidelines for coaches, saying children should not be taught how to head the ball until they are at least 12 years old, and that a "graduated" approach should be taken after that. A player at under-16s level, according to the guidelines, should be exposed to a maximum of 10 headers per week at training.

The guidelines do not affect matches, although heading does not occur regularly in lower age groups.

The advice comes after a University of Glasgow study, released in October and funded by the FA and English players' association, found that former professionals were almost three-and-a-half times more likely to die from any neurodegenerative disease than men of a similar age who did not play football – but did not establish any causal link relating to heading the ball.

Dr Kerry Peek, a concussion researcher at the University of Sydney, said there were better ways for FFA to handle the issue than simply following the lead of the English FA and implementing a blanket ban. 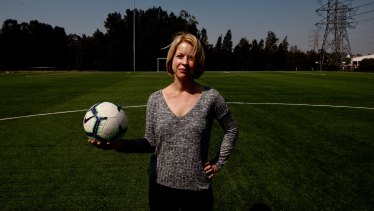 Dr Kerry Peek believes a blanket ban on heading for juniors would be a “reactionary” move by the FFA, and that much more can be done.Credit:The Sydney Morning Herald

Dr Peek's interest around heading the ball was sparked by her son, who plays football in an elite junior program. She came to realise that, in Australia, it is rare for young players to be shown the correct technique or any neck-strengthening exercises that could help them perfect the act of heading.

"Watching these kids head a ball without any training, without any neck development, to me was a little bit crazy," she said.

"My concern is that everybody is so scared of heading that nobody is teaching children how to head the ball properly, and I think that is going to increase the risk more than if we just carried on with current practice."

The FFA’s national coaching curriculum mentions heading only five times, and advises it should be taught from the age of 13 onwards – and, if taught earlier, only with "super light" balls developed specifically for junior football.

Dr Peek said banning heading at training in one age group but allowing it in matches, and then removing the ban once players get older, didn't make much sense – especially since some players head the ball much more often than others.

"A ban is a very reactionary approach to the current literature or publications that are out. I think we actually need to be sensible, and sensibly debate this," she said.

"There's so much more we can do. Let's not be black and white about this, let's look at the whole picture. You [can] put strategies into place that would make heading safer.

"One of them is making sure they have really good technique so that we teach heading with low-pressure balls, soft balls, so that they learn to activate their neck, and so they can then reduce the amount if head acceleration – but this has to be taught before they start heading a ball."

A spokesperson for FFA said the organisation had noted the English guidance, which will also be followed in Scotland and Northern Ireland and was produced "in parallel" with UEFA’s medical committee, which is set to publish Europe-wide guidelines later this year. 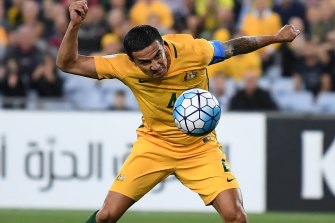 Tim Cahill’s ability to header the ball became the stuff of legend during his Socceroos career.Credit:AAP

"Player welfare is of paramount importance to FFA, and we continue to monitor research and liaise with all relevant sporting and governing organisations, including the FA and world governing body FIFA," the spokesperson said.

"We will be reviewing our guidelines in light of the latest developments.”

Heading has been banned in the United States for children aged 10 and under since 2015, in response to a class-action lawsuit.

"Soccer can pride itself on being an incredibly safe sport so if measures such as teaching kids the right heading techniques or outlawing the practice in sub-juniors are shown to further safeguard children and ensure young kids will enjoy the game into adulthood, then the steps should be supported," Didulica said.

"At a global level, we're doing some comprehensive work with FIFPro about the long-term effects of concussion which will inform lawmakers around sub rules and other adjustments that may be needed."

Tags: 'Watching, a, Ba, head, kids, these
You may also like
Latest Posts