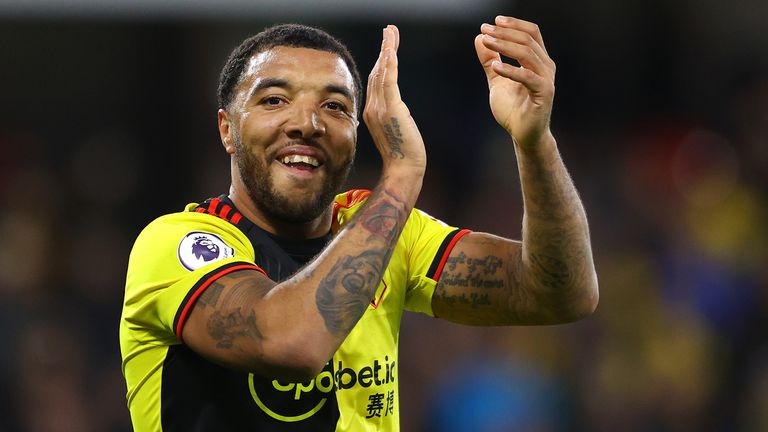 In hindsight, the warning signs had been there. Invincible, no more.

Liverpool will end their 30-year wait for a first domestic title at some point in the coming months, but their past four outings have shown that even a side 22 points clear at the summit are fallible.

Norwich are perhaps the best Premier League side the competition has seen to prop up the table after 27 games, and they showed their qualities during the Reds’ narrow win at Carrow Road, while West Ham led at Anfield with 22 minutes remaining on Monday Night Football – five days after Atletico Madrid had beaten Liverpool.

Watford are the first side to beat Liverpool in the Premier League since Manchester City in January 2019, ending the joint-longest winning streak of 18 games and the second longest unbeaten run in English top-flight history – but how did they do it? 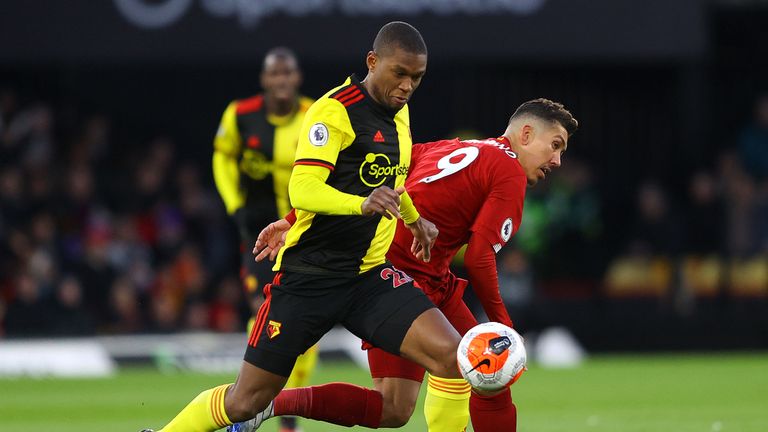 Watford’s victory was the biggest over a side starting the day top of the top-flight table by a team in the relegation zone since Leicester beat Manchester United 3-0 on November 23 1985. But it owed a lot to how they defended.

Klopp’s side had just one shot on target in a Premier League game for the first time since February 2019 – a goalless draw against Manchester United – as Christian Kabasele and Craig Cathcart formed a wall in front of Ben Foster’s goal throughout the 90 minutes.

Kabasele made a game-high 13 clearances, while Cathcart ranked second with 10 to his name. “We just need to do that every week,” a beaming Foster told Sky Sports. “It’s easy if you do it like that – we had a game plan and stuck to it really well. Their front three were dropping really deep to get the ball and we knew our game plan was working.

“We stuck to our task and took our chances when they came. We took a lot of belief when we played them at Anfield, I thought we were the better team then. There is a load more work to go.” 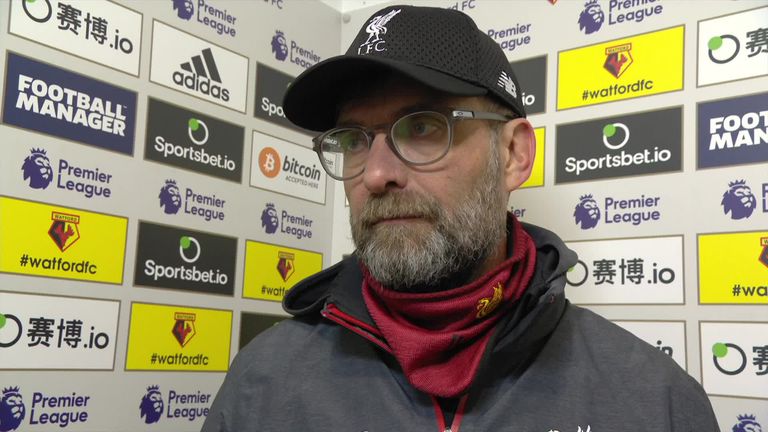 Liverpool had actually started the second half well. The visitors had been back out on the pitch a couple of minutes earlier than Pearson’s men, and Klopp admitted he noticed an improvement in the opening exchanges following the restart.

But, each time Liverpool sought to build up a head of steam, they found a very compact Watford side who dealt them two quick sucker-punches.

Klopp told Sky Sports: “We wanted to play quicker. With our high full-backs, they defended it with 6-3-1, so we had to think of ways of changing the formation. We couldn’t find the half spaces and the through balls weren’t easy. This is the highest level, and Watford fed off Liverpool’s five per cent drop off. Klopp’s side have fallen behind in both of their last two league games, having not trailed in any of the previous 15 before this.

“There were uncharacteristic mistakes out there from Liverpool,” Jamie Redknapp told Sky Sports. “Virgil van Dijk would normally do better for the first goal, and I think Watford had a game plan to make it really difficult for that back line.

“You do get off days, but Liverpool haven’t had many – to be beaten so convincingly by Watford is a surprise but it’s now about wrapping up the league as quickly as possible and forgetting about this one.” 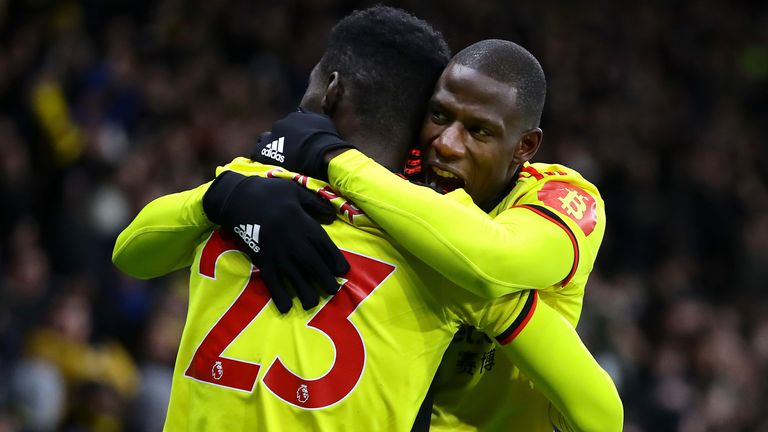 Watford only had 29 per cent possession, but by full-time, they had twice as many goal attempts, 14 to Liverpool’s seven.

The Hornets won 46 of their duels compared to 37 from the champions-elect, and the scoreline might have been worse for Liverpool had Sarr completed his hat-trick after one such duel lost by Adam Lallana in midfield.

Pearson lined his side up with Abdoulaye Doucoure playing just off Troy Deeney, but his athleticism allowed him to drop back into midfield with Will Hughes and Etienne Capoue to outnumber Liverpool.

Doucoure completed more successful passes than any of his team-mates (20), while the Frenchman’s 16 sprints was more than any other player.

Deeney told Sky Sports: “We won through genuine hard work, putting in a shift. We’ve been speaking about it all week… everyone’s been saying how good Liverpool are, but somebody has to beat them so why couldn’t it have been us? Especially on our own patch.

“We’re a very tough outfit to beat here, we get into people’s faces and that’s what we did. We got after second balls, made it difficult and forced the errors.”

Doucoure was pivotal to applying that squeeze in midfield. 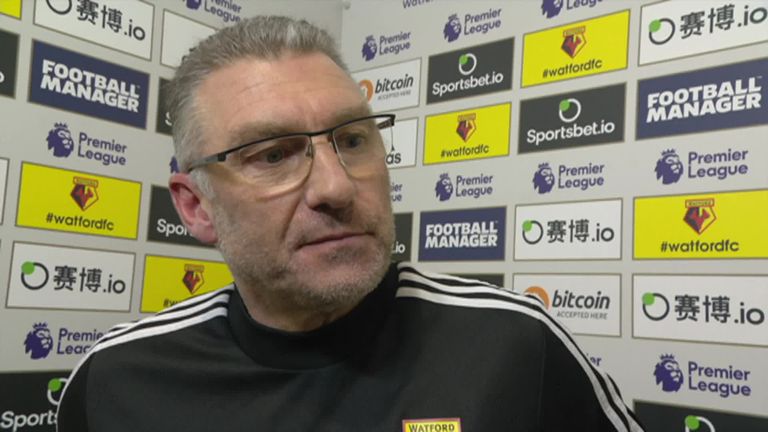 Watford’s victory is all the more impressive when you consider Gerard Deulofeu was forced off with a knee injury after 37 minutes.

The Spaniard had caused Trent Alexander-Arnold countless problems down the left, and the home side lost some momentum following the winger’s withdrawal.

But the interval came at a good time, allowing Pearson to remind his players that Liverpool were vulnerable to pace on the counter, brutally exposed in the second period by Sarr with his two goals. Remarkably, the Senegalese was making his first start since returning from a hamstring injury.

Deeney added: “He’s an unbelievable player, he’s got unbelievable talent. He still has a lot to learn, and will continue to learn.

“We knew we had to ride our luck at times, but we used the counter-attack aggressively. We had a very tight, compact block and with the pace of Sarr, you’ve always got a chance.”

Sarr is the first player to score a Premier League double against Liverpool since Marcus Rashford did so for Manchester United in March 2018.

Foster added on the man-of-the-match’s display: “He’s a crazy good talent, he’s so calm in front of goal and has electric pace.” 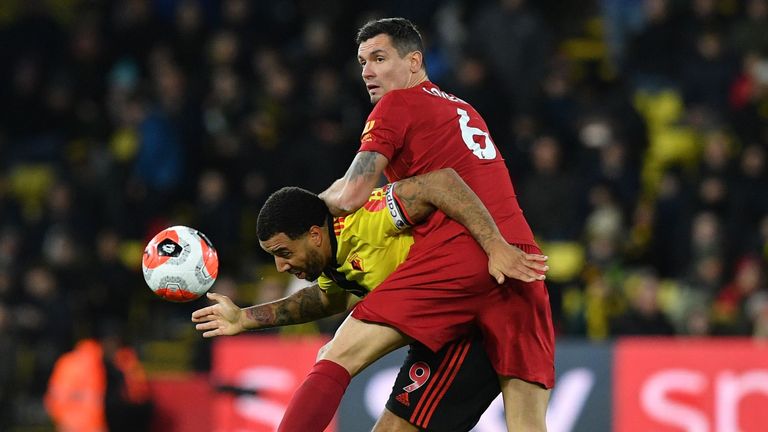 Joe Gomez had started the previous 12 Premier League games for Liverpool and won the lot. In fact, Gomez has still not been on the losing side in a Premier League game that he has started in over two years dating back to the defeat to Swansea in January 2018.

Liverpool had kept 10 clean sheets in the last dozen games coming into this one but proceeded to go three behind in a Premier League match for the first time since 2017. Dejan Lovren, Gomez’s replacement, was partially culpable for the opening goal too.

Deeney told Sky Sports: “Van Dijk is a class act… he’s probably for me the top five defenders in the world – he’s 6ft 6”, he’s fast… so it’s tough to get anything from him, so you try to pick on the weaker of the two, if that makes sense.

“I don’t want to be disrespectful to Dejan Lovren, but I knew he wanted to fight me as well and that’s my game. If you try to do that, you know you’re going to be in for a tough night. He did that for the first goal, obviously I rolled him and we scored. He wasn’t even watching the ball.”